If you're interested in home birth or women's reproductive rights, then set your watch for 9.15 am on Wed 2nd December 2015. It's the moment when a Grand Jury hearing begins at the European Court of Human Rights in Strasbourg. (Applications nos. 28859/11 and 28473/12)

The case concerns, Šárka Dubská and Alexandra Krejzová, both Czech nationals who wanted to give birth at home but under current Czech law, health professionals are not allowed to assist with home births.

Whilst pregnant with her second child in 2011, Šárka Dubská explored her birthing options and was told that public health insurance would not cover her home birth costs and also that a midwife would only be allowed to assist her in a location that had the technical equipment required by law. After she went on to give birth at home in May 2011, Ms Dubská took her case to the Czech Constitutional Court. She argued that she was denied the possibility of health professional assistance at her home birth, but her complaint was dismissed.

Whilst pregnant with her third child (her two other children were born at home), Alexandra Krejzová found that under new legislation brought into force in April 2012, midwives risked heavy fines for providing medical services without authorisation. Ms Krejzová ended up giving birth in a hospital with a reputation for providing woman-centred care. The problem was that this hospital was 140km away from her home in Prague.

Together, Ms Dubská and Ms Krejzová, took their cases to the European Court of Human Rights as they believed that expectant mothers wanting to give birth assisted by a health professional had no choice but to give birth in hospital, and that this contravened Article 8 of the European Convention on Human Rights, which is the right to respect for private and family life.

On 11th December 2014, by six votes to one, the Chamber ruled that there had been no violation of Article 8. The ECHR court said that there was no European-wide consensus on home births, and that allowing home births required the allocation of financial resources, for example, for adequate emergency provision. The Chamber concluded that European nations had a "margin of appreciation", in effect, wiggle room to regulate on this issue. But that's not the end of the story. On 1st June 2015, Ms Dubská and Ms Krejzová referred their cases to the Grand Chamber in Strasbourg and the hearing starts at 9.15am on Wed 2nd December. This is the last appeal for both cases, so in effect, an important roll of the dice for home birth in the Czech Republic.

The legality of giving birth at home was explored in our 2012 documentary "FREEDOM FOR BIRTH".

(To rent or buy FREEDOM FOR BIRTH - please go to http://freedomforbirth.com)

Our film looked at the implications of another landmark European Court of Human Rights ruling, that of Ternovszky vs Hungary in 2010.

Anna Ternovszky was a Hungarian mother who wanted to have a home birth supported by her midwife, Agnes Geréb, but the situation regarding the legality of such a birth was not clear. So Ms Ternovskzy took her country to the European Court of Human Rights and won. The court ruled that every mother in Europe has the human right to choose the circumstances of her birth.

Even though the 2010 ECHR Ternovszky holding is supposed to give all European women the legal right to choose how and where they give birth, the 2014 ECHR Dubská and Krejzová ruling seems to bring into question whether European nations legally have to fully support these choices.

Anna Ternovszky might have won her case in 2010, but since that year her home birth midwife, Agnes Geréb, has faced a number of criminal charges for supporting women giving birth at home. For the past five years, Agnes Geréb has been under continued detention and later this month, Dr Geréb returns to court in Hungary to face the next set of charges. 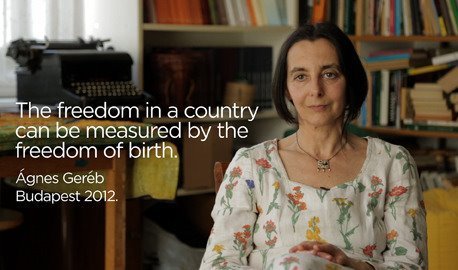 For myself, as a big supporter of fully informed choice for all women in childbirth, this ruling could be important not just for home birth in the Czech Republic, this could also be a defining moment for the rights of all birthing women across Europe. (Applications nos. 28859/11 and 28473/12)

I will be watching the Dubská and Krejzová Grand Chamber hearing live with baited breath on the European Court of Human Rights website.

Freedom For Birth is available to watch online or buy on DVD at http://freedomforbirth.com