This is the computer screen I was confronted with while attempting to watch the latest episode of "Marvel's Agents of S.H.I.E.L.D", Season 2, online at ABC.com's site. It says: "Select your provider." And what do you know? -- Time Warner Cable is not listed.

I had watched the previous show the night before and came back to see the new one, (and I did a Netflix-vid-binge of the first season last week -- cool.) But getting this roadblock to my viewing and Time Warner Cable not being listed or ABC not giving me an easy option to view the show...? This is not cool at all. 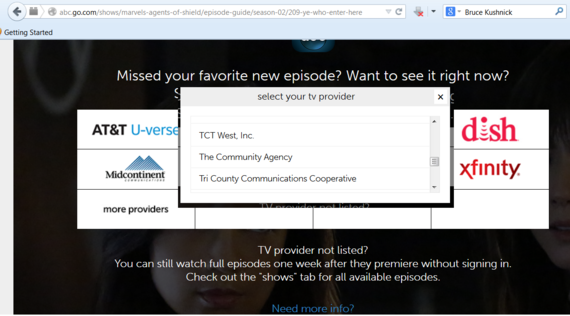 Isn't ABC TV a broadcast TV station? Why do I have to have permission from my cable company to watch this program online?

And who's kidding who? Did you ever attempt to watch some of these shows online? The screen bombs every 5-10 minutes or freezes or other nasty things. (Note: Don't touch the controls.) Or you wait to hear a row of the same commercials --such as the reasons to use "BOTOX" for migraines. Who knew that injecting "Botulinum toxin (BTX)" (which, according to Wikipedia can "cause 'botulism', a serious and life-threatening illness in humans and animals") was a good thing, except if it causes rashes or breathing problems? I even excerpted, below, the part which I could have memorized by now. In fact, the companies get more of my attention when I'm watching online -- I should be rewarded not punished.

Conspiracy Theory? I note, it has been so bad when watching the TV show "The Blacklist" on NBC's online site that I thought Comcast and Time Warner were making sure that the 'off-the-cable TV' network viewing and using the broadband-Internet experience to view the show would suck so bad that it would force us back to on-time watching over the cable part of the network to avoid "cable TV-cord-cutting". (And I was far from the only person who had problems viewing, judging by the flame comments of others.)

It Appears this Sign-in Issue could be Akin to those Buzz-Word Filled Expressions like "Net Prioritization' or 'Fast Lane' vs 'Slow Lane' (or 'No Lane') -- But with a Twist.

Who is to Blame? Your provider has a monopoly on the wire. You have to use their Internet, their broadband, their cable service vs having a choice of providers. If they don't want to make a deal so you can watch what you want, since they control your selection, their priority is your loss; their fast lane is, well, your you-can't-get-what you-want lane.

I blame Time Warner Cable, but since I don't know what went down, I'll blame ABC and throw in the Walt Disney Company; they could have just let me watch the show without this gatekeeper issue.

Wikipedia writes that "The ABC Owned Television Stations Group is a division of Disney-ABC Television Group that oversees the owned-and-operated stations of the American Broadcasting Company, a division of The Walt Disney Company."

I note that this same thing of having to 'log in' is common and happened when I wanted to watch, online, the latest "Hell on Wheels" show on AMC, a cable channel. Time Warner Cable at least has a deal with them. (However, sneaky me, I used a different web browser which didn't have the official 'cookie' authentication to 'login-in' to capture this gem. The other browser remembers who I am and signs me in automatically...lucky me.)

Wikipedia writes: "AMC is an American basic cable and satellite television channel that is owned by AMC Networks. The channel primarily airs theatrically released movies, along with a limited amount of original programming. The channel's name originally stood for "American Movie Classics", but since 2002 the full name has been de-emphasized as a result of a major shift in its programming."

This is just going to get worse. Why did Time Warner not sign on with ABC? Why? And this isn't just my problem. I read part of a complaint about Time Warner -- same problem in North Carolina.

For those of you that have heard of "Title II" or the "Communications Act of 1934", I give you Section 202, which is part of a section called "Title II: Common Carriers".

Net Neutrality? Simply put -- the phone and cable companies want your broadband and Internet connection to be "Title I" (an "information" service) to avoid Section 202, claiming it is not a telecommunications service under Title II.

Title II is known as "Common Carriage" for a reason. I shouldn't have to ask permission to see an ABC TV show and my provider, who has a monopoly over the wire, should either be required to make deal so that my experience is 'common carriage' -- I decide where to go without someone else getting in the way, or they compensate me for a violation of Section 202 or some other legal requirement.

(A very funny aside. When I used the spell checker, "Title I" was highlighted and it came back replacing the "I" with "me". How ironic. This is all about what 'they' want -- control. I can hear Time Warner and the other controllers of the wires singing "It's all about me, me, me". And, using this model, "Title II" means it is not just "me", one person, but "us", which requires at least 2.) 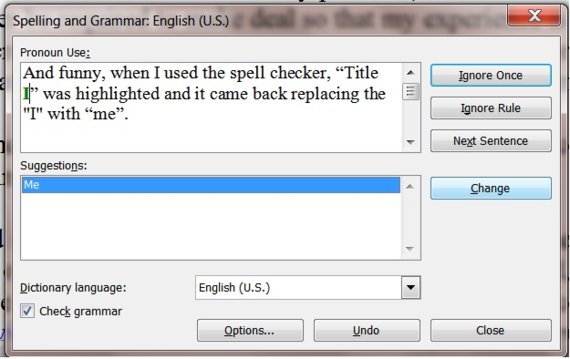 Some might call this a business dispute. This is about control -- and not from the business side but from the customer side -- at the end of the day customers lose.

Oh, and let's allow these companies to merge and get larger as there will be one owner for most of cable TV in America. Great idea. Combined, it gives these companies even more political power, but also control over a lot of the content as Comcast is a content provider and owns NBC, Bravo or Telemundo (and even owns Hulu).

And let's face it; the wired companies are out for blood. Comcast just complained about Netflix, again, in the last few days. Adweek writes: "Comcast Tells FCC Its the Victim and Netflix Is the Villain". And there are reports all over the web about the problems with Netflix viewing and the ISPs. My own service stalls almost every other time I use it, especially if I move to a different part of the movie.

You don't have to hold a weather vane to know which way the wind blows. (I paraphrase Bob Dylan.)

Competition Over the Wires, "Open Networks" Is the Answer, Not Just Net Neutrality.

Unfortunately, most who are calling for Net Neutrality or Title II don't get the underlying issue -- It's all about one company 'vertically integrating', meaning controlling all of the primary services over the wire -- and now tying the broadband and Internet use to the cable companies' cable TV service, to block specific content.

I can't simply drop the Internet service and find some other ISP or broadband provider over the wires coming into my home. The only other wire is Verizon, who is also pointing fingers at Netflix; who knows whether they are blocking or don't have a deal with other TV providers. (And Verizon continuously raising my local service rates over the last two decades didn't endear them to me.)

Moreover, the FCC has never been a good enforcer of laws and regulations and there is decades of history to prove it; from the FCC's failure to 'enforce' basic merger conditions to protecting your rights, much less the competitors' rights who offer you service, it was the FCC, with the phone and cable companies, that closed the networks in the first place, causing this lack of competition and Net Neutrality issues.

Since this is the Christmas and Holiday Season, I wrote this letter, and returning to the opening of this tale of woe:

Please send us the Avengers (Thor, Iron Man, the Hulk, Captain America) and S.H.I.E.L.D, (including Director Fury and Coulsen, his team, and Agent Romanoff) to open up these networks to competition, now. Or at least tell ABC.com to let me watch the new shows online, regardless of the wicked ISPs holding us hostage.

Of course, if you want to know more, we hear that some of the elves are recommending a new book for this holiday season. See "The Book of Broken Promises: $400 Billion Broadband Scandal & Free the Net".

P.S: I know you are busy this time of year, but did you happen to see my last Time Warner Cable Triple Play Bill? Help America fix this Christmas tree of presents to the cable and phone companies that we pay for. That would be cool. (No pun intended about the North Pole.)