Not only is storytelling a genuine art form, it's a lot harder than one might think. It requires skill with vocabulary, phrasing and a deep appreciation of the musicality of one's language. It requires a sense of drama, of make believe and, above all else, a deeply personal kind of buy-in from one's audience.

Of course, storytelling can accommodate more than one viewpoint. There can be a single narrator, or two characters trying to justify their individual points of view. Some shows depend on spectacle and magic tricks to keep an audience's attention riveted to the stage.

Whether one story is told through the eyes of several characters (Rashomon) or the voice of one person, it's the writing and delivery that will put any story across to the audience. Consider these three "Waterlogues" written by Stuart Bousel and performed by Allison Page during the 2015 SFOlympians Festival.

Many a play has been built on the model of A meets B, A gets B, A loses B (the gender of the two characters offers a variety of permutations). Another variation on a theme involves the old "Can't live with him, can't live without him" kind of love affair. The challenge for a writer is to find a structural device which gives life to the story of a relationship between two radically different personalities.

Some writers choose a linear path. Others opt for an epistolary format (I heartily recommend Steve Kluger's 1998 novel, The Last Days of Summer, and Jamie James's 2002 novel, Andrew and Joey). Can a literary device lose its effectiveness if it becomes too much of a crutch?

Many years ago, when Jule Styne's ill-fated musical, Prettybelle, was struggling through its Boston tryout, I sent its star, Angela Lansbury, a letter explaining why the show's frequent flashbacks were losing the audience (the show was based on Jean Arnold's novel entitled Prettybelle: A Lively Tale of Rape and Resurrection) . When I came back to see another performance just before Prettybelle closed out of town, I was shocked to see that most of the flashbacks had been written out of the script. When I visited Lansbury in her dressing room, she said "I gave your notes to Gower [Champion]. As you can see, he used them."

The moral of the story? Just as too many cooks can spoil the broth, too many flashbacks can undermine a love story's momentum.

The Magic Theatre recently presented the West Coast premiere of Tanya Barfield's intimate two-hander entitled Bright Half Life. Directed by Jessica Holt on a simple, yet surprisingly elegant unit set designed by Erik Flatmo (with costumes by Christine Crook and sound design by Brian Hickey), the play was staged in the Rueff Theatre (American Conservatory Theater's new black box space) atop the recently renovated Strand Theatre on Market Street. As the playwright explains:

In my life: Event A leads to B, which leads to C. But in my mind, all three events happen at the same time or out of sequence. Bright Half Life began as a few pages of unrelated, often jarring moments of events between two characters called 'Person 1' and 'Another Person' in a document called 'new-idea.' When I was about 30 pages in, I realized that these seemingly unconnected moments and events were weaving their own story. The themes of Bright Half Life demand virtuosic performances, emotional gymnastics, and sleight of hand storytelling. We, as audience, are in communion with the actors -- we're all together in the same room, breathing the same air. To me, that's what makes theater special. 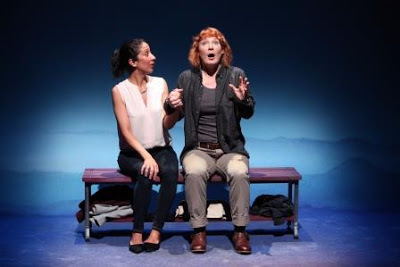 Barfield's play traces the relationship between two women from the day they meet on the job in 1985 until 2031 (after they have split up and fallen out of touch for a while).

Vicky (Sarah Nina Hayon) is the more tightly wound woman. Initially holding all the power in her hand as Erica's supervisor, she falls in love with a woman who is much further out of the closet, much earthier, much more romantic, and much more in touch with her desires. 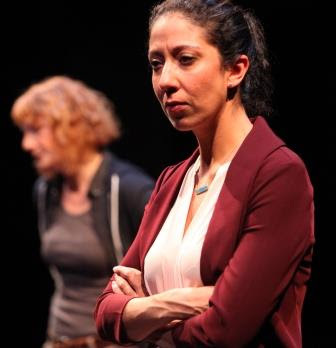 Erica (Lisa Anne Porter) is someone who wears her emotions much closer to the surface. Occasionally mischievous, she is nevertheless terrified of some of the challenges Vicky cooks up (going for a ride on a Ferris wheel, going skydiving). Whereas Erica is a lowly office temp when they first meet, once they move in together, get married, and have children, it becomes apparent that Vicky is the true breadwinner while Erica (who writes tech manuals) is the partner who devotes the most time to worrying about and raising their twin daughters, Lexi and Chloe. 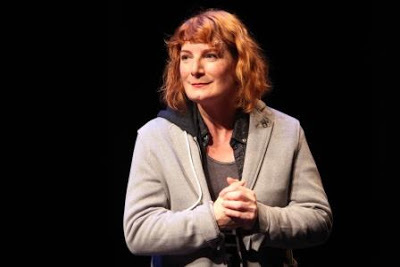 Lisa Anne Porter as Erica in Bright Half Life (Photo by: Jennifer Reiley)

Barfield's writing often leaves the audience feeling as if they are being erratically flung back and forth on a yo-yo whose arc is becoming shorter and tighter. As Vicky and Erica careen back and forth between various phases of their relationship, the story of their lives starts to emerge as if through a fog. Unfortunately, until the final scene (when the two women jump out of a skydiving plane), it's easy to feel as if you're the passenger in a car whose driver likes to speed up to each stoplight before hitting the brakes hard (without ever allowing the audience a sense of closure for any particular scene). After 85 minutes, this process becomes as tedious as watching a Newton's cradle.

Attempting to love one person meaningfully over time is not for the faint of heart. One of the joys of the play, for me, is how it allows us to experience the tangled rush of those tough and foolhardy leaps of faith inherent in the rituals of coexisting. The exceptional care with which Tanya incrementally unveils the unique fragility of each of the unlikely individuals that make up this (and any) union is what I think makes the play truly exceptional. I fell for this buoyant, thrilling, no-holds barred language play for many reasons, not the least of which was Tanya's trust in the essential ingredients of theater. She enlists us as the audience to actively and emotionally engage with structure in a truly extraordinary way. She trusts that we are hungry to flex our imaginations and hearts, and to lean in. 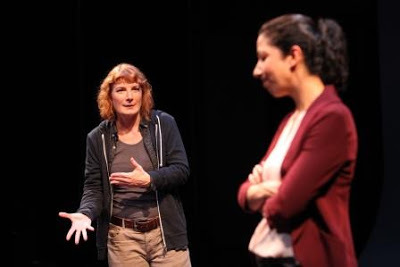 I was less captivated by Barfield's writing and found the play's structure increasingly alienating as the evening wore on. While Jessica Holt's stage direction and Sarah Nina Hayon's portrayal of Vicky were solid pieces of work, I came away more impressed with Erik Flatmo's stark, graceful set and the amazing grace of Lisa Anne Porter's portrayal of Erica.

One of the key responsibilities of any actor is to pay attention to the person she is interacting with at any given moment. While Hayon's Vicky was, by necessity, a bit dismissive and self-absorbed, the true wonder of the evening was watching how Porter (simply by paying attention to Hayon) managed to quietly capture the kind of love and warmth that often radiates from embers rather than flames. Her glowing performance reminded me of the lyric from Cole Porter's song in 1948's Kiss Me, Kate: "So In Love."

Strange dear, but true dear, when I'm close to you, dear,

The stars fill the sky, so in love with you am I.

Even without you my arms fold about you,

You know darling, why, so in love with you am I.

In love with the night mysterious

The night when you first were there.

In love with my joy delirious

When I knew that you could care.

So taunt me and hurt me, deceive me, desert me,

Kiss Me, Kate has a strange relevance to Sarah Ruhl's 2011 farce, Stage Kiss (which the San Francisco Playhouse recently presented with Gabriel Marin and Carrie Paff in the leading roles). In Kiss Me, Kate, Lilli Vanessi examines the flowers she has received from her ex-husband, Fred Graham, and exclaims "Snow drops, pansies, and rosemary -- my wedding bouquet!" In Stage Kiss, Marin kisses Paff's forearm and instantly recognizes the combination of scents which used to drive him crazy: "Paper, lemon, and sweat!"

Ruhl makes no bones about her inspiration for Stage Kiss (in which two former lovers discover they have been cast as onstage lovers in a Grade-B romantic drama from the 1930s). 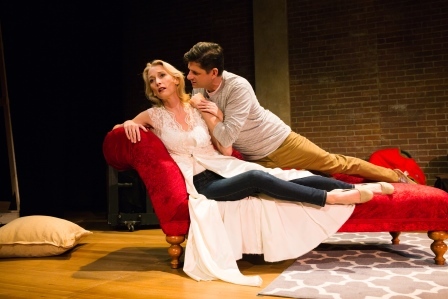 Carrie Paff (She) and Gabriel Marin (He) star in Stage Kiss (Photo by: Jessica Palopoli)

As its plot bounces between rehearsals, performance mode, and real life, Stage Kiss lovingly mocks the habits and tics exhibited by actors as they audition, rehearse, and interact with the person playing opposite them onstage. Whether the woman (Carrie Paff) wants to readjust the positioning of chairs or must react to a young gay man (Allen Darby) reading lines during her audition who leans in to kiss her while opening his mouth as wide as a basking shark, the eccentricities of life in the theatre world are on full display under Susi Damilano's knowing direction. 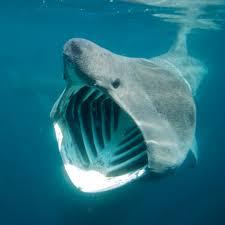 Thus, it's no surprise to see an eager but fairly incompetent stage director (Mark Anderson Phillips) encouraging his cast to improvise, or a scene in which the play's two leads end up in bed together after opening night. Nor is it surprising that the leading lady's husband (a "numbers guy" played by Michael Gene Sullivan) secretly wishes that his wife would teach him to act and that their daughter (Taylor Imam Jones) not only hates her mother, but finds her mother's ex-lover's acting embarrassingly inept. 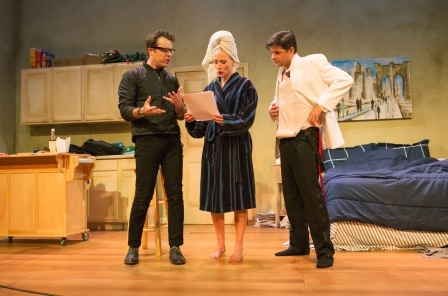 Ruhl's play addresses a series of contradictions which may be unique to the world of the theatre.

The very term 'stage kiss' implies that it is not real. And yet, a kiss is still a kiss. Lips meet. Moisture is exchanged. Warmth is felt. It is the actor's job to kiss. Stage Kiss is a love poem to the theatre, a dance that seduces us by stepping deftly across the line between real and the unreal, on stage and backstage, illusion and reality. It is an existential play, a piece of fluff, a love story wrapped in a love story, wrapped in a love story. 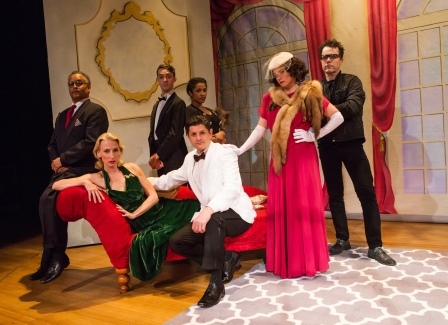 The cast of Stage Kiss (Photo by: Jessica Palopoli)

Because Carrie Paff and Gabriel Marin are two of the region's best-liked actors (at San Francisco Playhouse as well as at other theatres around the Bay area), their familiar faces and personalities bring an extra dramatic impact to Ruhl's play. While Taylor Iman Jones, Millie DeBenedet, and Michael Gene Sullivan all lend strong support, Kevin Allen gets huge laughs as an apprentice actor during auditions and rehearsals (as well as in Act II, as a ridiculously costumed pimp in a screechingly awful play written by the character portrayed by Mark Anderson Phillips).

Whether onstage or off, the burning issue at the core of Stage Kiss is best summed up by Herman Hupfeld's 1931 lyric for "As Time Goes By" (which became famous in 1942 when it was used in the movie, Casablanca).

You must remember this:

A kiss is still a kiss

A sigh is just a sigh.

And when two lovers woo

On that you can rely.

No matter what the future brings

Never out of date

And man must have his mate

That no one can deny.

It's still the same old story

A fight for love and glory

A case of do or die.

The world will always welcome lovers 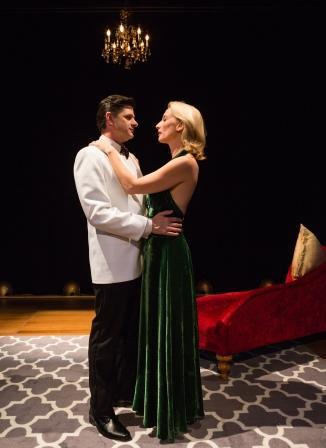 Gabriel Marin (He) and Carrie Paff (She) star in Stage Kiss (Photo by: Jessica Palopoli)