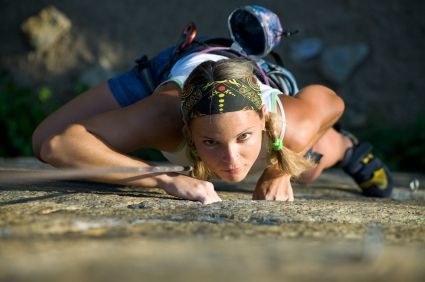 Way back in 1970, when many people watched the atrocities in Vietnam and wondered if the world would ever feel safe again, psychologist Mary Ainsworth and her colleagues at Johns Hopkins University were investigating how we come to feel "safe" in the first place -- by watching children play. Their findings, along with those of a new study, may provide the blueprint for a more exciting life.

The 9x9 square foot room Ainsworth's group used was an exercise in minimalist restraint: On one side, there was a single chair for the mother, and directly opposite, near the door, another chair for a stranger. Along the third wall of the room, there was a tiny chair, suitable for a child, heaped with an assortment of brightly-colored toys. Each interaction in the room (there were eight in total) had been scripted ahead of time, with the mother slipping out quietly, or staying to watch with the stranger, or even leaving the baby in the room alone. The point of all this shuffling back and forth of adults and babies was not only to measure how securely attached the infants were (did they seek comfort and calm down easily when the mother returned, or cry and fuss, becoming inconsolable or even ignoring her, the mark of insecurity?), but how their security affected their willingness to explore the world.

What Ainsworth discovered has become required reading for psychology students everywhere. Securely attached children attacked Ainsworth's meticulously constructed world with gusto, clambering, tasting, touching, smiling -- giddily embracing the strangeness of it all with an energy the insecurely attached could scarcely match. Their mute knowledge that their mother was always there for them gave them the confidence to strike out on new adventures. The world, in effect, became their oyster.

Inspired by the results of Ainsworth's research, subsequent researchers branched out to study adults and discovered much the same thing. People who feel more securely attached (comfortable being close to and depending on someone) aren't just happier, but more likely to seek thrills like rock climbing and parachute jumping and throw themselves into new situations and challenges, like meeting strangers and traveling overseas. And now, new research suggests that their sense of adventure may stem from a lust for life that security, itself, imparts.

Across three studies, psychologist Michelle Luke, of the University of Southampton, recruited hundreds of participants from websites, such as psychology forums, LinkedIn, and online communities with a psychology theme. All were asked to imagine a relationship in which they felt secure, insecure or "neutral," using as series of guiding questions, like, "Please think about a relationship you've had in which you found it relatively easy to get close to the other person... and didn't worry about being abandoned..." (a secure prompt) They were then asked to picture this person and how they felt in their presence, and given separate scales to describe how secure and how "alive," "energetic," "vital," etc. they felt.

The first study confirmed what Luke suspected: People who imagined a secure relationship felt more energy than those who didn't. But the next studies were arguably even more important. They offered the first evidence that feeling secure might create a sense of vitality over and above just being in a great mood. People asked to imagine hilarious moments from their favorite movie or TV show didn't experience the same charge that securely prompted subjects did. They were happy. But they weren't excited. And as for people prompted with the insecure or neutral visualizations, once again, they missed out on the secure energy boost. The author's conclusion? People who anxiously cling to, or push away, their closest connections are drained, enervated by their lack of security. They're simply too wrapped up in bad feelings to embark on new adventures.

Couples are all too often pushed to keep things exciting for the sake of their relationship. But where does excitement come from? Is it injected into the heart and soul of a relationship, through prescribed routines, like a secret rendezvous at midnight, every Tuesday, or an evening out at the fancy new restaurant that serves everything on a bed of green foam? Or do good relationships, themselves, imbue us with a vitality and curiosity that drive the impulse to experiment and explore? Is a secure, happy relationship the key to an exciting life?

Taken as a whole, these studies suggest that we may have put the cart before the horse. Ainsworth's infants became intrepid explorers, but their drive to explore may have found its source in an energy they felt -- a charge that comes from knowing they had a secure base to return to. Perhaps the lesson is that we should spend less time trying to manufacture excitement and more time trying to nurture healthy relationships. The biggest turn on in life might just be knowing someone's always in your corner.

If you like my posts, let me know! Let's connect on Facebook and Twitter. And be sure to sign up for my newsletter, for more tips and advice, as well as information on my forthcoming book, Rethinking Narcissism: The Bad--and Surprising Good--About Feeling Special, about understanding and coping with narcissism in all its forms, in our friends, lovers, colleagues-and even ourselves. HarperWave and Harper UK, July 2015

A version of this article previously appeared at PsychologyToday.com