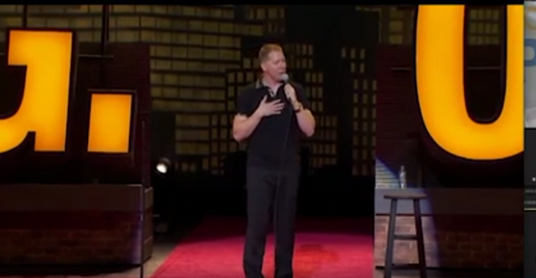 Below is a post on the Facebook page of so-called comedian Gary Owen. As you may have read, Owen's Showtime special, I Agree With Myself, contains a skit in which he mocks and degrades people with intellectual disability. Owen is profusely unapologetic. 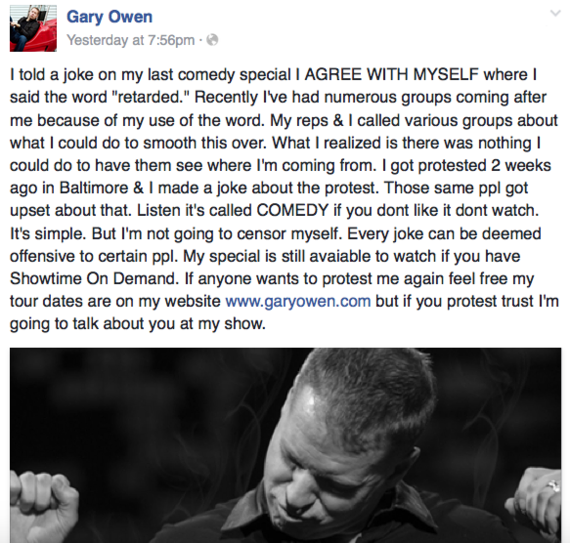 Owen has made it seem like his right to use the word "retarded" is a freedom of speech thing, hoping to invoke sympathy and support from his audience. Thing is, he takes offensive way beyond tossing around a slur, as should be completely clear to anyone who watches this video.

As if this isn't bad enough, Owen has essentially threatened to make fun of people who rail against him in his act--in the above Facebook post, where he notes "....if you protest, trust I'm going to talk about you at my show" and in a Twitter post.

Meanwhile, Owen continues to promote that he is in the right because he doesn't believe in censorship. Actor/comedian Tom Arnold had this to say:

It's already pitiful that Owen can think of no funnier material than people with disability, but the fact that he's bullying people to back off by warning that he'll use use them in his act is cowardly. It's also offensive to his audience; he's expecting them to pay good money to hear him joke about people protesting him for being cruel? Again, is there no other comedic fodder he can come up with?

Oh, but wait for it: Owen has mentioned, in a radio show, that HE felt bullied when people in Baltimore picketed his show and when people have tweeted at him. Because, of course, he is the victim here. Poor, poor Gary Owen. The guy who mimics Special Olympic athletes running and people with disability having sex.

The situation continues to gain attention, thanks to a petition launched by the Special Olympics and a social media campaign. People can tag @garyowencomedy and @Showtime telling them to take down the material, and take up our cause, and to use the hashtag #WeAreNotAPunchline. Disability self-advocates are speaking up for themselves. An excerpt from a letter being sent to Owen:

Your five minute segment on Showtime took away our humanity. It was offensive and discriminatory. It is not ok to make fun of us. You have tried to defend yourself by saying we're upset that you used the slur retarded. You didn't just say a word you mocked us. You have targeted the disability community with a level of hatred, not seen on television in recent time, or ever. You have agreed to meet us, and then change your mind at the last minute.... I read a tweet on Twitter that says "a joke that needs a scapegoat is not a joke, its cruelty that counts on my silence." You have crossed the line Gary, and we will not be silent.

Owen has already cancelled one meeting with advocates to discuss the situation, and word is he recently cancelled a subsequent meeting with self-advocates. Showtime refuses to remove the segment from the show, which is available On Demand, citing freedom of expression. Yet as Attorney Laurence H. Tribe recently noted in his powerful Huffington Post piece, "This is not a matter of 'political correctness....' When words and images become the bullets that rip through the psychic and emotional flesh of the most vulnerable and often helpless among us, it is time for people of principle to stand up and say: 'Enough!'"

It pains me to see this guy demeaning people with intellectual disability, as a mom and as a human being. But it's downright infuriating that both Owen and Showtime refuse to back down. There is no standing on principle here. Freedom of speech is beside the point--this is hate speech we're talking about. Since when is that acceptable, let alone funny?

My name is Ellen Seidman. I am the mother of a child with intellectual disability. If you make fun of me and others for standing up for our loved ones' dignity, Gary Owen--if you consider that the best comedy material you can give your devoted audience--then you are possibly the most pathetic comedian ever.

Here's one for ya: Did you hear the one about the comedian who made people with disability the butt of his jokes? No? That's because people realized his act was just plain sad.

This post originally appeared on the blog Love That Max. More from Ellen Seidman:

• Would you call my child a retard?
• If you ask people not to use the word "retard"


Image: Screen grab/I Agree With Myself

More:
disabilityshowtimespecial needs parentingintellectual disabilitiesDisability rights
Newsletter Sign Up
Raise the kind of person you'd like to know
Subscribe to our parenting newsletter.
Successfully Subscribed!
Realness delivered to your inbox