Imagine exploring the High Sierras in summer, and feeling thirsty you reach out for your bottle of water, only to discover that it is empty! You walk in search of a stream and on finding one are just about to fill your bottle when you pause and wonder if the water is safe.

If you had had the TeStraw with you at that time, you would have solved your dilemma on "to drink or not to drink" in a jiffy. 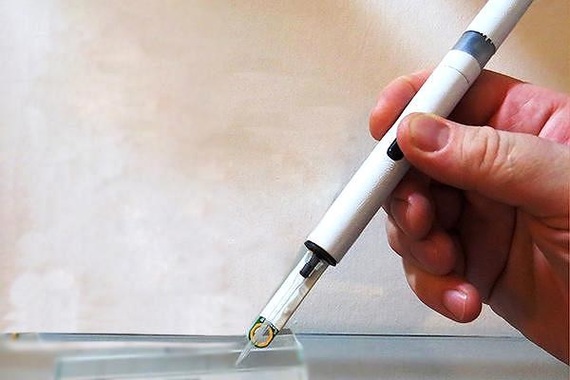 Water, water, everywhere, Nor any drop to drink.

When Samuel Taylor Coleridge wrote the verse above in The Rime of the Ancient Mariner in 1798 he was referring to sea water. However, in many places of the world potable water is scarce, and the water that is available for drinking even in developed countries has a lot of contaminants and is not safe to drink. Lishtot the Israeli startup that makes the TeStraw believes it has the right solution.

Featured as one of the twenty of the CNBC's world's hottest start-ups in 2015, Lishtot's TeStraw is a personal water testing device that tests for pathogens, heavy metals, and organic chemicals in water. Within 5 seconds you would know whether the water was suitable for consumption or not. The sampling, testing, data collection and result display are automatically carried out by the handheld device.

"Water quality in much of the developing world such as India and Africa is not guaranteed, and many people still drink, bathe, and work in polluted waters that may include pathogenic bacteria, organic pesticides, or heavy metals" according to Netanel Raisch CEO and co-founder of Lishtot, whom I met at the Israel Conference in Los Angeles a few weeks ago .

The United States Environmental Protection Agency says that it is working to improve its understanding of a number of of contaminants of emerging concern" particularly pharmaceuticals and personal care products and perfluorinated compounds among others. In the past decade, polybrominated diphenyl ethers and perfluorinated compounds have emerged as contaminants of concern because they are widely distributed and persistent in the environment. Both types of chemicals accumulate in human tissue or blood, and are associated with health effects including endocrine disruption.

I wondered how much instant testing would cost, and Netanel assured me the price could be a few cents per test. The retail price of thedurable portable device which individuals could use will soon be available online and will cost less than $50; he hopes to lower this cost further for developing countries. The company also offers an on-pipe monitoring device for utilities to ensure safe drinking water supply. "For the on-pipe device we will work with utilities as well as water meter manufacturers who want to integrate our technology in their products," Netanel added.

How does the Lishtot's technology compare with existing testing systems? Fast heavy metal tests generally need at least fifteen minutes while typical plating protocols take eight to twenty-four hours. There is no need for added reagents or special tracer molecules with the TeStraw. Since the output in Lishtot's technology is a digital signal, it can not only be displayed but also sent to a remote data center in real time.

Netanel added that the company was committed to mapping water quality worldwide and making it available for individual or governmental use.

The company has received $260,000 from angel investors, and a grant from the Israeli Government for $ 130,000. They will be fundraising further to be able to start mass production and hope to be able to be in the market in mid- 2016.