I love people who overcome the odds. A great comeback story, whether in sports or business, is something mesmerizing to me.

Recently, I have been listening and watching with great interest to the self-proclaimed experts on Tiger Woods and his golfing career. Many of his critics have probably never picked up a golf club or, at best, are 18 handicappers at their local Muni.

I want to share with you some perspectives of a successful CEO who also has been a scratch golfer.

In the last 48 hours, I have read these headlines:

"Tiger Woods' leave of absence signals the end of a legendary career."

"This is the end for Tiger Woods."

For those of you who may have not heard, Tiger Woods announced this past week that he is taking an "indefinite break" from golf, saying his game is "unacceptable for tournament play."

Folks, that's OK. Just because Tiger is taking what I perceive to be a calculated break from the game does not mean the golf world and Tiger Woods have to come crumbling down. How soon we forget that just five short years ago, his career was declared finished when he backed out of his driveway Thanksgiving weekend in '09, his marriage in shambles, his many indiscretions revealed and a plethora of injuries ensued. The critics at that time declared him finished.

What if Tiger himself had believed the critics in 2009 and 2010 (a year in which he never won a PGA event) that said his career was over? How short are our memories? Tiger came roaring back in 2013, won five Tournaments (who does that?) was Player of the Year and regained his status as the No. 1 player in the world.

The truth is we all face challenges. All of us fall down, both in business and in our personal lives. And unfortunately, some people get enjoyment over seeing the mighty fall. Yes, Tiger has made mistakes, massive ones in fact. He has opened himself to penetrating scrutiny, but I still hearken back to a famous quote from Teddy Roosevelt:

"It is not the critic who counts; not the man who points out how the strong man stumbles, or where the doer of deeds could have done them better. The credit belongs to the man who is actually in the arena, whose face is marred by dust and sweat and blood; who strives valiantly; who errs, who comes short again and again but... spends himself in a worthy cause..."

And friends, whether you like Tiger or not, he has been in the middle of the fray.

What if Steve Jobs in 1985 when he was fired from Apple at the ripe old age of 30 had believed his critics? Others will try to put you down and construct artificial walls for you from which you can never escape. But the key word there is "artificial" -- these walls do not exist in reality and this is the point I would emphasize for Tiger Woods.

To Tiger, I cite what Steve Jobs said:

"Don't let the noise of others' opinions drown out your own inner voice."

If Mr. Jobs were alive today, I am convinced he would be cheering for Woods to come back and silence the naysayers. I have always told my children and grandchildren to not allow the narrow perceptions of others constrain what they can become. The great pioneer leader and spiritual giant Brigham Young said, "Why should we worry about what others think of us? Do we have more confidence in their opinions than we do our own?"

One of my children, Angela Bradford, was a bit of a phenom in golf herself, having won something like 60 golf tourneys as a youth. Together we have watched Tiger's career blossom and fade. 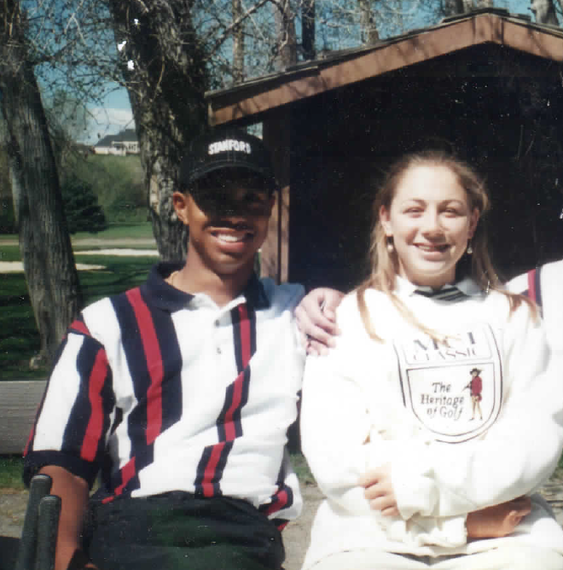 Having watched Tiger up close and personal, I, for one, am not ready to say he is through.

I would remind Tiger of this saying: "Your past mistakes are not meant to define you; they are there to guide you."

I believe Tiger Woods has all of ingredients to prove the critics wrong. I recently heard world famous inventor and Venture Capitalist, Marc Andreessen, describe the two qualities for which he looks when he searching for the top entrepreneurs in the world. These are the same qualities possessed by all great champions of sport and business:

I believe he knows how to overcome yet another obstacle to create a magical success.

Sam Snead, who holds the all-time record for most professional golf victories, once said:
"The mark of a great player is in his ability to come back. The great champions have all come back from defeat."

Something magical can yet happen.

In the end though, it is up to Tiger. If Tiger decides to make golf his top priority again, I have no doubt he can raise his status again to No. 1 in the entire world. He is blessed with both courage and genius. We had one remarkable experience some years ago that told me all I need to know about Tiger.

In 1997, Dr. Linda Bradford and I went back to the Masters golf tournament in Augusta, Ga. It was a glorious couple of days watching Tiger dominate the field. After the third day of competition, as we were walking away from that magnificent Masters venue, we looked over as the sun was going down and saw ONE PERSON ON THE DRIVING RANGE. It was the man who held a 9-shot lead -- the 21-year-old Tiger Woods. The man not only had the greatest talent in the world but with courage and determination he became dominant.

At that Masters event, Woods won his first major championship, 12 strokes ahead of his nearest competitor. It was the largest victory margin for a major until Tiger dominated the U.S. Open by 15 shots in 2000. Some would argue that that was the greatest athletic performance of all time.

I have seen massive turnarounds in business engineered by brilliant CEO's. In 1985, when Apple fired Steve Jobs from the company he founded, the end was near. Yet today, due to Steve Jobs' courage and genius, Apple is worth around a half-trillion dollars making it the No. 1 most valuable company on the planet.

Dave Thomas, Founder of Wendy's, thought he was done in 1982. James Near eventually took over the CEO role and started the turnaround, but his genius and determination brought Dave Thomas back as the company spokesperson helping to drive the company to massive success with 6,500 stores in 26 countries making it the world's second-largest hamburger fast-food chain.

Just 10 years ago. Best Buy was named Company of the Year by Forbes. It battled 100s of cheap retailers both online and offline. After its stock price plummeted to around $11 a share, the company brought in CEO Hubert Joly to take the reins in late 2012. Through guts and genius, Best Buy now enjoys a market cap of nearly 14 billion and a stock price around 40 bucks a share.

Individuals CAN turn things around. I would contend it is tougher to turn around a large company then turning around an individual.

President Ronald Reagan once said, "There are no constraints on the human mind, no walls around the human spirit, no barriers to our progress except those we ourselves erect."
Tiger -- You can do this... if you want. But it's also fine if you decide that raising your children, working in the business world and/or developing other personal relationships are more important in the long run.

I, for one, am rooting for that massive turnaround. Go get 'em, Tiger.

Speaker, CEO/Chairman, University Professor, Networking expert, Former CEO of HireVue and Fusion-io. Author of "Up Your Game: 6 Timeless Principles for Networking Your Way To the Top."