Plutocracy: A country or society governed by the wealthy.

Populism: A political style of action that mobilizes a large alienated element of population against a government seen as controlled by an out-of-touch closed elite that acts on behalf of its own interests.

On Saturday morning after all the pomp, parades and inaugural balls are over, after the tuxedoes and gowns are back in their closets, after Washington's workers have picked up the trash and taken down the grandstands along Pennsylvania Avenue, and as dawn breaks over the Potomac, more than 300 million Americans will wake up to their first full day with Donald Trump as president.

Many of them, including the blue-collar workers and rural residents who helped Trump win the election, will wonder whether a new day is dawning, too, for a society in which 75% of us are "strugglers" while the rest of us, including the 8 million households with more than $1 million in assets, are "thrivers". 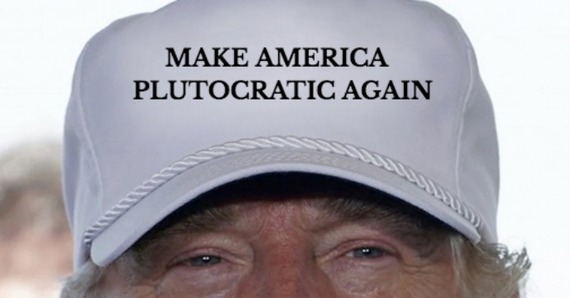 Since the beginning of his presidential campaign, Trump has raised many more questions than answers about what kind of president he will be. But for America's strugglers the biggest unanswered question is whether President Trump will be a populist, a plutocrat or some combination of both.

Take rural America as an example. "After years of declining electoral power, driven by hollowed-out towns, economic hardship and a sustained exodus, rural voters turned out in a big way this presidential cycle -- and they voted overwhelmingly for Donald Trump, fueling the real estate mogul's upset victory," wrote blogger Helena Bottemiller Evich on Politico. "The billionaire New Yorker never issued any rural policy plans, but he galvanized long-simmering anger by railing against trade deals, the Environmental Protection Agency and the 'war on American farmers.'"

Trump has promised to defend American workers against companies that hire illegal immigrants or take their operations offshore for lower wages and taxes. But he has done both in his own businesses. And the struggling class undoubtedly wonders how much he really feels their pain from his gilded tower high above Midtown Manhattan. While he talks like a populist and has been characterized as one by the media, he openly brags about how his money gave him ready access to politicians and how his accountants helped him escape paying income taxes, leaving that obligation to those less able to afford it.

If one measure of a billionaire's compassion for the working class and the unemployed is philanthropy, then the signs from Trump are not good. For example, more than 150 of the world's wealthiest families and individuals have taken the "giving pledge" launched by Bill Gates and Warren Buffett in 2010. They have promised to give most of their wealth to philanthropic endeavors. Neither Trump nor his Cabinet picks appear to be among them. Based on tax records he released in the past, Trump has been called the "least charitable billionaire in the world."

So, starting on Saturday morning, we will see who this man really is and who he becomes under the weight of the presidency, beyond his tweets, his slanders and his lofty but insubstantial generalizations. Will this wealthiest Cabinet in American history close the wealth gap or institutionalize it? When Trump vows to make America great again, is he talking about great for the strugglers as well as the thrivers, and for a healthy environment and a just society as well as a robust economy?

The tension between democracy and plutocracy is not new in America. It has been apparent for a long time that the United States has become more of a plutocracy than the democratic republic the Founders intended. Our history includes a long and often bloody war between the workers and owners in our industrial economy. Today, the war manifests in the effort by some red states to destroy labor unions and to make it harder for lower-income voters to vote.

"Income inequality may be a hot topic during the current American election season, but it's also a stark reality that has plagued the country for hundreds of years," notes documentarians who have produced a video history of the strife between corporations and workers. "That sad history foreshadows what many are still grappling with today."

Writing about plutocracy in America, history professor and author Ronald Formisano concludes, "The growing gap between the most affluent Americans and the rest of society is changing the country into one defined--more than almost any other developed nation--by exceptional inequality of income, wealth, and opportunity... A government dominated by finance, corporate interests, and the wealthy has undermined democracy, stunted social mobility, and changed the character of the nation."

The wealth gap is not unique to the United States. It has been growing worldwide. But a study issued this week by the World Economic Forum confirms that the gap is especially pronounced here. We ranked 23rd out of 30 developed countries on how well economic growth is translating into social inclusion.

While wealthy Americans and corporate titans have been part of government throughout our history, most of the thrivers' influence on government and the economy has been exercised indirectly using lobbyists, campaign contributions and well-financed front organizations. That influence was supercharged by the Supreme Court's ridiculous decision in 2010 that the government cannot restrict political contributions by organizations because to do so would violate their freedom of speech.

Researchers at Princeton and Northwestern University concluded in 2014 that the democratic republic envisioned by the Founders has been replaced by "economic elites and organized groups representing business interests (that) have substantial independent impacts on U.S. government policy, while average citizens and mass-based interest groups have little or no independent influence."

The Washington Post just published an example from Democrat U.S. Sen. Sheldon Whitehouse of how this influence works. The topic is climate change.

"The dirty secret is that climate change is not really a partisan issue in Congress," Whitehouse writes. But Citizens United "allowed the fossil-fuel industry to roll heavy (campaign finance) artillery out onto the political field, not just its previous musketry. This atmosphere has quashed any Republican effort on climate change, silenced serious climate debate in Congress and ended progress, as desired and directed by the fossil-fuel industry."

While special interests will keep firing their heavy artillery, what's different today is that the federal government itself is under the control of economic elites. Wealthy Americans have always served in government but in 2012 for the first time in U.S. history, most members of Congress were millionaires. In 2015, the typical member of Congress had a net worth exceeding $1 million.

The Cabinet nominated by Donald Trump would be the richest in the nation's history. If Trump's nominees all are confirmed by the Senate, the executive branch will be under the direct control of elites who will have greater authority to undo the federal laws, rules and programs put in place over the years to protect the American people from corporate greed. Among the most important is the ability of the Environmental Protection Agency to prevent companies from polluting our air and water and to limit the climate-changing emissions of power plants.

Nothing says more about a president and the likelihood of success or failure of his administration than whom he picks as his closest advisors. More than any power mandated by the Constitution or by statute, it is the chemistry of the people who occupy the most important offices in the White House and the cabinet that determines the character and the direction of any administration.

So what do Trump's appointments say about the direction of his presidency? There are at least three ways to think about the apparent contraction between Trump's Cabinet nominees and his rhetoric about making America great again for the 99%.

The first interpretation is that Trump simply likes to surround himself with the rich and famous, especially when he can be the greater among equals.

The second interpretation is that Trump plans install a plutocracy in the guise of creating jobs.

The third and most optimistic interpretation is that Trump is bringing alpha-Americans into government because they know how to get things done and will help rebuild an opportunity society.

Will the richest Cabinet in the history of U.S. government close the wealth gap between their class and the nation's strugglers - those who are willing to do the hard work of achieving economic security if they have the opportunity? Can plutocrats be populists? We will soon find out.