So why is there even a debate with almost no inflation? Because ultralow inflation helps the largest wealth and debt holders, and even a hint of increasing inflation devalues those interests.

Earnings in March did rise a higher-than-expected 0.3 percent but the year-on-year rate, as seen in the blue columns of the graph by Econoday, has been coming down, at a year-on-year 2.3 percent in March. This rate will have to accelerate to the 3 to 4 percent range before, as far as Federal Reserve policy makers are concerned, it will begin to lift overall prices.

"Total nonfarm payroll employment rose by 215,000 in March, and the unemployment rate was little changed at 5.0 percent, the U.S. Bureau of Labor Statistics reported last Friday. Employment increased in retail trade, construction, and health care. Job losses occurred in manufacturing and mining, only."

So are we even approaching full employment, the holy grail of most economists and the Fed's overriding mandate? This is even though the unemployment rate rose a notch to 5 percent from 4.9 percent. But it was because more Americans joined the labor force, the Labor Department said Friday. The size of the labor force has increased by 2 million people in the past five months, a clear sign that jobs are easier to find.

Those new workers and job seekers, particularly since last fall, pushed the so-called labor force participation rate up to 63 percent. That's the highest level in two years, reversing at least for now a sharp decline that kicked in after the onset of the Great Recession, said the Bureau of Labor Statistics. 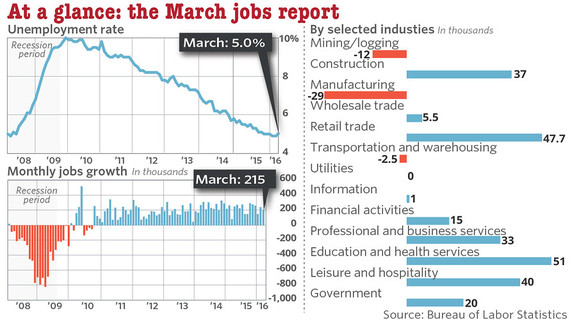 This is a sign of progress towards fuller employment. The household survey measure of employment (that includes the self-employed) shows a very good 246,000 gain in March, it is just that the labor force increased by an even bigger 396,000. And the labor force has now increased by more than two million in the past five months alone. "This is a remarkable turnaround in terms of both its speed and magnitude," said Marketwatch's Jeff Bartash.

And the manufacturing drop may be temporary as its component in the industrial production report posted a surprising 2 tenths growth in February, which came on top of January's 'stunning' gain of 0.5 percent.

In fact, the March just released ISM Manufacturing Report showed a big surge in ISM new orders, which is certain to shake up what has been a very downbeat outlook for the manufacturing sector, said Bradley J. Holcomb, CPSM, CPSD, chair of the Institute for Supply Management® (ISM®).

So what will full employment actually look like? Even In March, 1.7 million persons were marginally attached to the labor force, says the Labor Department, down by 335,000 from a year earlier. (The data are not seasonally adjusted.) These individuals were not in the labor force, wanted and were available for work, and had looked for a job sometime in the prior 12 months. They were not counted as unemployed because they had not searched for work in the 4 weeks preceding the survey.

But, the number of persons employed part time for economic reasons (also referred to as involuntary part-time workers) was about unchanged in March at 6.1 million and has shown little movement since November. These individuals, who would have preferred full-time employment, were working part-time because their hours had been cut back or because they were unable to find a full-time job.

So, yes, we are approaching full employment, but still not there. Our Fed Chairwoman Janet is right. Let's allow more of those part timers, and marginally attached folks to find work that can fully support them and their families before the Fed tightens the credit screws any further.