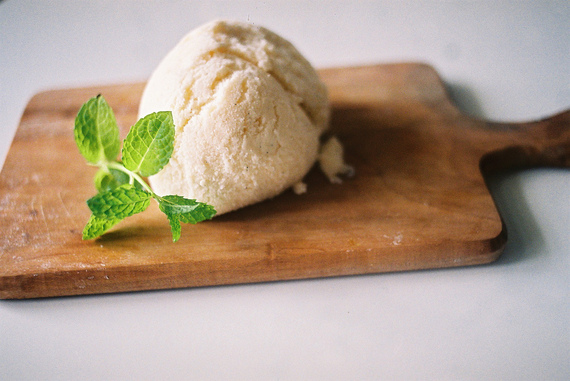 "You can learn a lot of important information about someone by watching how they eat an ice cream cone," says my friend Matthew Amster-Burton, co-host of the Spilled Milk food podcast.

I'll take that a step further and propose that you can learn a lot about a nation and its people from their founders' stance on ice cream.

Take America, for instance. George Washington craved the stuff, while Thomas Jefferson is credited as the father of ice cream in America. Here's TJ thinking about a cold scoop of it: 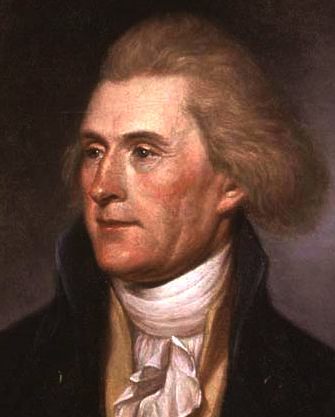 "His vanilla ice cream was legendary," says Patricia Rain, author of Vanilla: The Cultural History of The World's Favorite Flavor and Fragrance. "We can give [Jefferson] credit as the father of vanilla ice cream in the U.S."

Today Jefferson's handwritten vanilla ice cream recipe is in the Library of Congress, among his other important papers. (Get a more legible version of his recipe here.) 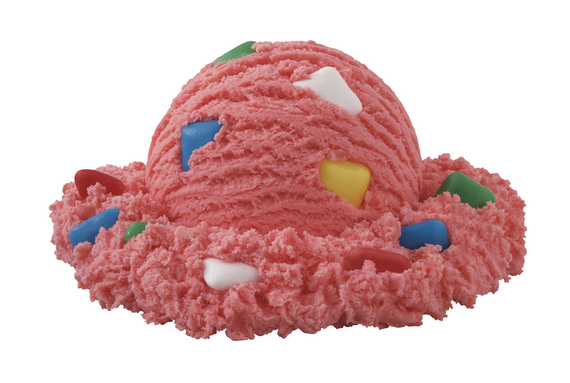 This week on The Sporkful, we're talking about Jefferson's beloved vanilla ice cream and its rightful accompaniment, pie. It's pie a la mode for your ears -- though we're keeping the pie and the mode separate, for the most part.

First up, I get deep on vanilla ice cream with Molly Wizenberg and Matthew Amster-Burton (below) from the podcast Spilled Milk: 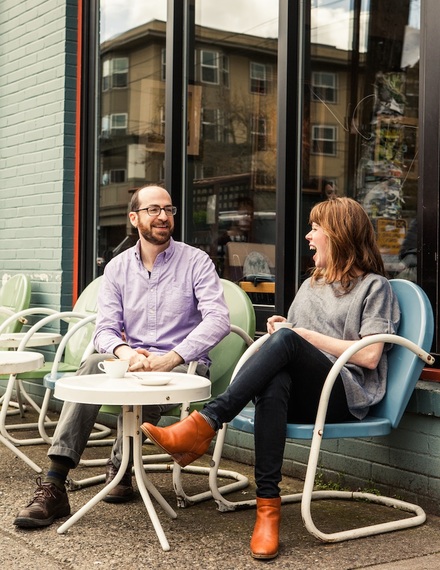 Molly is pro-cup, while Matthew prefers a cone for his ice cream. But they agree on one crucial ice cream consumption strategy: letting it thaw and soften before eating.

"I will sometimes scoop a big scoop and then break it up into three pieces and let it sit for five minutes before I eat it," Matthew says.

Molly's method is even more involved:

"You eat the first two scoops as they are sort of starting to melt," she says. "You let the third scoop fully melt, stir it up with the remaining chocolate syrup."

As a child, Molly called that "ice cream soup": 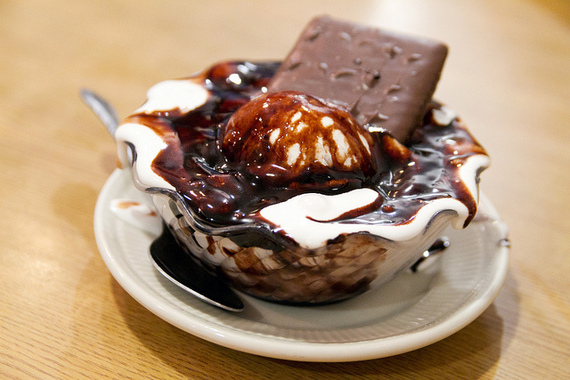 Eaters, I have to agree with Matthew and Molly. In fact, my recipe for Ice Cream With Time (Eat More Better, page 101) is based on the principle that ice cream tastes sweeter, richer, and creamier when it isn't frozen solid.

And we test my theory that those little black flecks actually make ice cream taste better. Listen in to the full episode for an unexpected revelation on those little things: 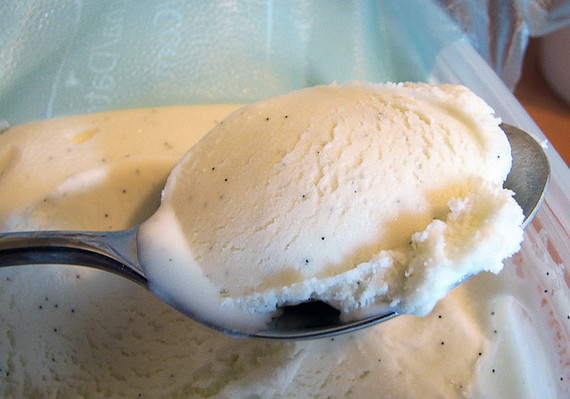 Later in the show, we move on to pie with Bon Appetit editor-in-chief Adam Rapoport and my Aunt Meryl from Houston. These two couldn't be more different. Adam used to be the editor of GQ. He lives in New York City. 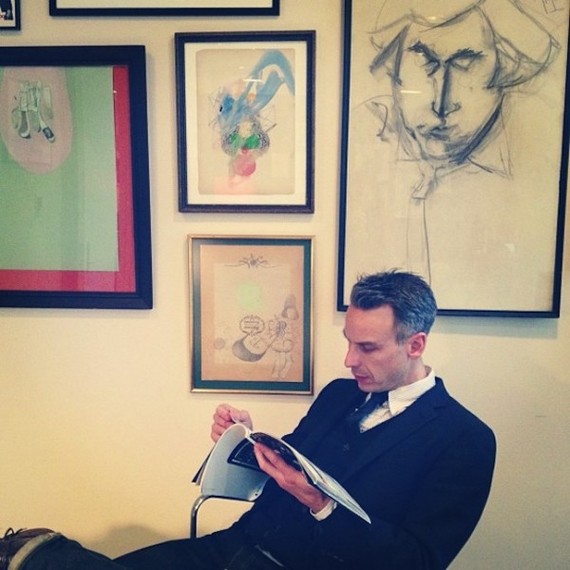 Aunt Meryl has worked for years in the wholesale food business in Houston. Here she is at work, not wearing one of her trademark Metallica t-shirts: 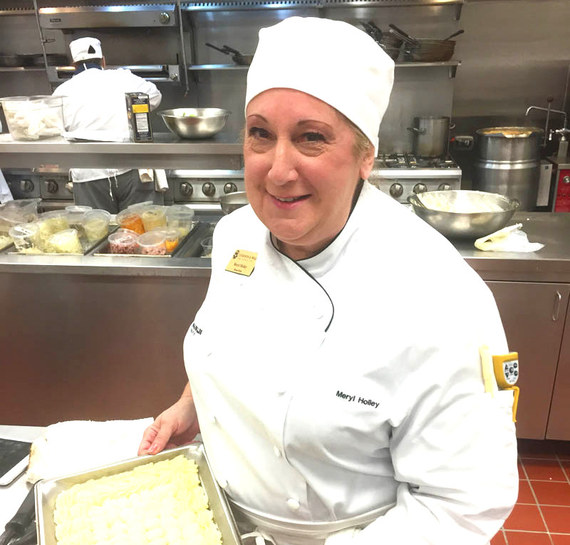 Their stances on pie are also very different. Adam is an unapologetic pie hater, while Aunt Meryl has never met a pie she didn't love. When they got together for a debate at South By Southwest in Austin earlier this spring, they jumped right into the fray:

Adam: "This is kind of like professional wrestling. I'm the evil wrestler."

From their convictions on crust to filling philosophies, Adam and Aunt Meryl took different positions on almost every aspect of pie:

Aunt Meryl: "I really like the filling. I'll eat cherry pie filling out of the can."

But they did agree on one thing. And eaters, you won't believe what it was: 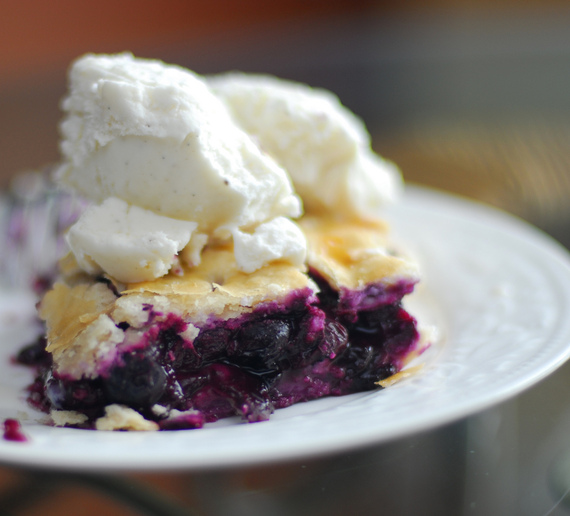 "I don't like anything a la mode," Aunt Meryl said. "I like ice cream in one bowl and my pie in the other. And I like whipped cream on everything."

"Maybe it's the Jewish, lactose-intolerant guy in me," Adam said. "But sometimes ice cream is too much."

Pie without vanilla ice cream?! What would Thomas Jefferson say???

Well, more pie a la mode for me.