Andrew Wakefield says he is not going away, but if last week's anti-vaccine rally in Chicago is any indication, his audience is.

An estimated 100 anti-vaccine activists turned out to hear Wakefield and 13 other speakers on a sunny day in Grant Park. If you add event volunteers, vendors, press, speakers, skeptics, and curious bystanders, the crowd numbered less than 200.

"Generally the crowd consisted of mothers with their young children," notes Jamie Bernstein, a graduate student in public policy at the University of Chicago who witnessed part of the event. "It looked sweet until I started listening to what the speakers were actually saying. Words like 'Nazis,' 'eugenics,' 'world order,' and other bogeymen brought up to terrify parents were tossed about with what seemed like utter disregard toward their true meaning."

Like any good public speaker, Wakefield started with a story:

About 15 years ago a mother from London approached him and said "Do not judge me too harshly Dr. Wakefield, but when I die I am taking my son with me. You see, I'm all he has. I'm the only one who loves him."

"I didn't judge," said Wakefield. "I was moved by the love that a mother must have for her child that she would take his life rather than have him fall upon a society that really didn't give a damn."

Having established his street cred, Wakefield stuck to the party line that vaccines are way more dangerous than the diseases they protect us against, and they are not being adequately studied for safety. And he promised to soldier on, and continue to do the studies that the medical establishment is afraid of. Or something like that.

The crowd also heard from financial analyst and amateur immunologist Michael Belkin, who played electric guitar and sang Vaccine Gestapo. He was introduced by a speaker who claimed "vaccine safety" is the defining issue of our day - forget global warming, social inequality, and radical Islam. The real tragedy, apparently, is that too many children are protected against too many diseases. Fortunately, we have a talented songwriter to whip the masses into a frenzy. Lucky audience members snagged free copies of Belkin's CD, which featured two other ditties: We Don't Want Their Flu Vaccine, and Keep Your Mandates Out of My Body. Here's the cover art: 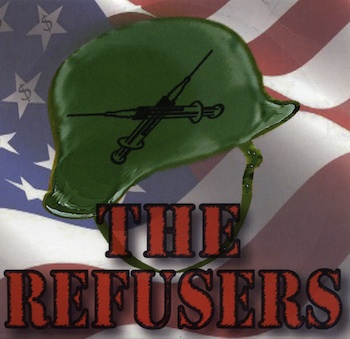 Vaccine trial lawyers hit a few low notes of their own. Attorney Robert Krakow, who draws his sustenance from the Vaccine Injury Compensation Program, pretended to lead anti-vaccine activists in The Fish Cheer. He stopped at F, and quipped "That's what the government can do with its vaccine program." Referring to his salad days of prosecuting drug crimes in Manhattan, Krakow confessed "I should have been going after the real drug pushers" - meaning the CDC, AAP, FDA, etc.

Note to Attorney Krakow: Technically speaking, vaccines are not drugs, they're "biologics". But we get it -- you're mad.

The anti-vaccination event had been heavily promoted for weeks, and busing was arranged for the 33 mile ride down I-90 from the Westin O'Hare, where hundreds more were attending Generation Rescue's annual trade fair/revival meeting. But by 5 p.m., as the rally fizzled to a close, dozens of anti-vaccine signs sat unused, and a sign-in sheet listed a mere 35 names and email addresses. Hundreds of free bananas remained unclaimed, and most of the vendors' tables that lined one side of the quad remained empty.

Meanwhile, the rest of city carried on as normal. In this case, that was a good thing.

More:
healthy livingHealthVaccineandrew wakefieldvaccines
Newsletter Sign Up
The essential guide to taking care of your mind and body
Subscribe to HuffPost’s wellness email
Successfully Subscribed!
Wellness delivered to your inbox