Recently, and much to the surprise of my wife and I, our just-turned-nine-year-old daughter sprouted a second head.

Before I get into the details, allow me to make two disclaimers straight away:

First, technically it was not a head in the conventional sense. But she did have conversations with it—some of which were quiet and subdued, others of which amounted to heated arguments requiring our direct intervention.

Second, technically she did not sprout it from her body. She took it, with grateful surprise, from my own naïvely generous hands. It was a thoughtless gift—an afterthought, in fact, subsequent to a thorough spring cleaning.

It was, of course, an old and nearly-dead (but still spritely) smartphone—android circa 2008. It was battered and bruised, with a frayed and stubbornly uncooperative power cord. Yet it soon sprang back to life, as when the Black Knight from The Holy Grail quipped "'Tis but a scratch!" before resuming combat with his worthy adversary.

Soon our daughter and her phone were inseparable, like a child with a newborn puppy. Her excitement was palpable.

But her tunnel vision soon became annoying as, distracted Macaulay Culkin's cameo in Michael Jackson's "Black or White" video, she failed to respond to simple questions or directives. (It is, apparently, hard to pack one's lunch when the height of 90s-era music video production lay at one's fingertips.)

She soon became annoyed as well, as the gadget—despite its flashy promise—responded to her fumbling requests with about the same level of interest and reliability as a untrained mutt.

If I hadn't for the preceding nine years bit my tongue to hide the full range of my profane vocabulary, she would have slammed the thing down with a righteous "WTF!?"

As a student and teacher of media studies, I'm well aware of the McLuhan-esque concept that technologies are extensions of our bodies and minds. More recently, Nicholas Carr argues in The Shallows that the Internet is an "intellectual technology" since (at least in theory) it extends our cognitive abilities.

But as Carr himself suggests, the services we use online can retrain our plastic brains in troubling ways. To dignify the likes of Instagram and Candy Crush as somehow "intellectual" is to stretch the term to its breaking point. One might as well flatter the fumbling Inspector Clouseau (or for that matter, Inspector Gadget) as "extensions of the justice system."

Rather than brain enhancements, our digital appendages often resemble mutant Siamese twins—benign and half-witted at best, brilliantly neurotic at worst. Had I unwittingly handed my daughter her own psychopathic twin?

When I was my daughter's age, I took a weekend trip to the Scranton, PA suburbs to visit family friends. Among other fineries, these folks were blessed with a VHS (or possibly Beta) video cassette player. On the weekend of our visit, the older of their two sons had rented the now-classic cult horror movie Basket Case, which we proceeded to watch with a giddiness usually reserved for the ritual unveiling of a stash of shoplifted Pez dispensers.

If you haven't seen it (and I'm not recommending that you do), allow me to summarize:

Following in the path of better-known classics like Halloween, writer and director Frank Henenlotter released Basket Case in 1982. The main character, Duane Bradley, communicates telepathically with what is best described as a "mutant Siamese twin" whom he keeps hidden in a locked basket. After birth, the twins' parents had arranged to have the deformed twin forcibly separated from his more able-bodied brother. The two embark on a search through the sleaze of early-80s Manhattan to find—and wreak bloody vengeance upon—the guilty doctors.

Suffice it to say, things don't go as planned. In a climactic scene, Belial escapes and jealously pursues his brother's new-found girlfriend.

Despite the film's egregious gore and violence, it was this brief and creepily sexual encounter that caused my friend's father to intervene. "Guys," he said, "this is kind of intense." Then, having fulfilled his obligations, he promptly left the room and we watched until the bloody end.

We knew what the director himself knew: the film was only half horror. The other half was dark comedy. Basket Case is a satire of sorts. After all, the premise is absurd: Who would walk the streets of NYC accompanied only by an unruly—and possibly murderous—appendage?

And yet, something about my daughter's relationship with her smartphone had prompted this pop-culture flashback.

As my colleague Amy Hasinoff explains, "each new communication technology is met with a lot of panic and concern." The problem, she tells me, "is that we're usually worrying about what's new and spectacular about each one, and we forget about our pre-existing social problems."

Misguided panic is surely pervasive, as evidenced by a now-viral photo of phone-wielding schoolchildren who, sitting in Amsterdam's Rijksmuseum, appear oblivious to the presence of a Rembrandt masterpiece. (They were reading about the painting.) 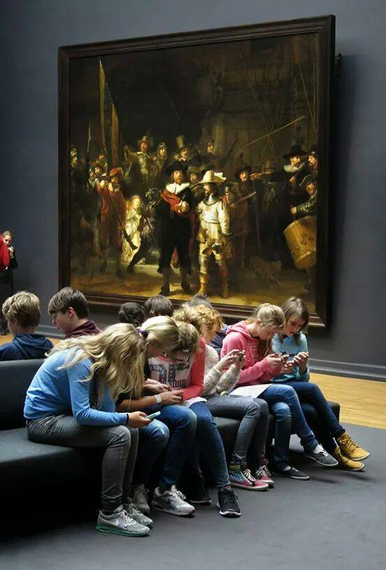 I've sat in faculty meetings where the specter is raised: If we separate the digital natives from their smart (and sometimes apparently smarter) digital appendages, will they seek their revenge, if only through negative end-of-semester teaching evaluations? (Answer: possibly)

It's worth remembering, as Lynn Clark pointed out a while back, that horror films reflect deep-seated concerns originating in American culture's distinct brand of evangelical Protestantism: themes of evil, death, and possible salvation. Pop culture flicks sometimes reinforce these ideas, but sometimes they call them into question too.

So what can this 80s cult film tell us about the hidden psycho-mechanics of today's digital culture?

On one hand, tech evangelists seem to fetishize their gadgets as if they had birthed them through hours of anguished labor. Picture Steve Jobs backstage with a team of code-savvy midwives, cheering the arrival of an iPhone he'd spawned from his own flesh before ushering him onto the stage at MacWorld 2007. It's not a difficult image to conjure. There's something to be said for the cultish ethos of Silicon Valley, and the possible neuroses its utopianism might engender. Though overstated, the French theologian Jacques Ellul raised a serious point in his scathing condemnation of scientism and techno-idolatry as "the new demons."

On the other hand, as Henenlotter seems to know, the thrill of watching a film like Basket Case derives precisely from our knowledge that its premise is absurd—and that many of our driving fears are ultimately baseless creations of our own imagination. That is a point that today's preachers of moral panic would do well to keep in mind. As Sherry Turkle notes, the Internet is still in its "baby stages." We need, therefore, to guide it toward a virtuous maturity.

Our gadgets are not inherently demonic and, with due respect to Joni Mitchell, our children are not merely "cellphone zombies" who "babble through the shopping malls." The kids are alright, or will be, provided that we soundly reject the equally misguided cries of "tech will save us" and "tech is evil." The new demons of the digital age are not the gadgets in our hands but the old vices of tribalism and superstitious fear.

When I spoke to Prof. Clark, she reminded me that responsibility works both ways: "It's ok for a parent to expect that a child will put away the phone during family meals or other activities—as long as the parent is ready to do that, too. Kids don't like it when their parents 'babble through shopping malls,' either. And too many parents find it hard to live without their own technological appendage."

As for me, I spent the morning rigging an aerial swing to a tree in the yard. As my daughter twirls and poses, she can just about hear the tunes streaming from her battered phone. Echoing through the yard, the King of Pop sings, rather insistently, "I ain't scared of nobody, Girl when the goin' gets mean."

Now if you'll excuse me, I need to go buy her a new power cord. This old one's going straight into the waste basket.