"Sometimes the Bible in the hand of one man is worse than a whisky bottle in the hand of (another)... There are just some kind of men who're so busy worrying about the next world that they've never learned to live in this one, and you can look down the street and see the results."
Harper Lee, To Kill a Mockingbird

My faith matters to me. I read the Bible. I attend church. I pray when something is weighing heavily on me. But while I used to find my identity only in the label of "Christian" or in the name recognition of my local church, I've realized people care much more about whether I am kind than whether I have faith.

Every person of faith must choose if faith is water or cement in their lives. That choice is sometimes a lifetime in the making. A faith that is cement is meant to be absolute, definable, tangible, and - most importantly - defendable. Black and white. It is the rock on which they stand. And they will defend it, all of it. Their position, their beliefs, their convictions. They cannot be moved.

For the longest time I was in that camp. I forged ahead, clinging fiercely to a black and white faith. But while I thought I was following Jesus, I was really falling in line with the opinions and attitudes of family, friends, and faith leaders who felt it was their duty - and God-given right - to shape my character to look like theirs.

Over time, my faith has become more like water. Picture a river, constantly flowing, deep enough that we cannot see the bottom. Sometimes we step in and sometimes we step out. Most often, I think I sit on the bank and watch. Sometimes, I muster enough courage to bend down and scoop a little up in my hands, but most all of it slips through my fingers. Because in my life, faith has become larger than anything I can control.

I'm learning to live in the grey areas, to love the power of curiosity and mystery. In connecting more with the character of the genuinely good man I read about in the life of Jesus, my faith is becoming more like water and less like cement.

Jesus constantly broke religious and cultural rules on behalf of the disenfranchised who needed love, healing and belonging. But it's more than just not following the rules, he reminded us to embrace our own humanity. 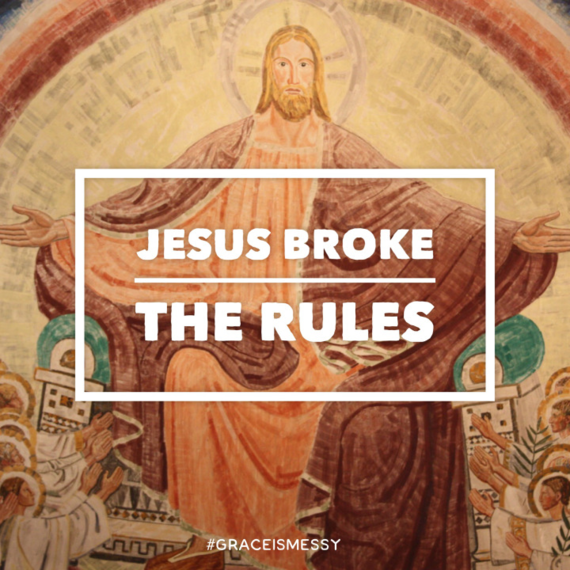 After resurrecting from the dead, Jesus could have preached sermons and continued to wow the crowds. Instead, he greeted his best friends on the shoreline and cooked them fish over a campfire. He knew they'd been out fishing all night and would be starved. This is the day after Easter! He could have expected his disciples to anoint his wounds with oil and worship at his recently nail-scarred feet, but Jesus greeted his followers as friends and served them.

The people in our lives are also tired and hungry. They are overworked, underpaid, and just trying to make ends meet. Many are even trying to follow Jesus as they go, but they feel exhausted because their boat has been rocking back and forth all night. And now, it's morning and the sun is beating down on them again and all they want is breakfast. Not a sermon, not a debate. Just breakfast.

The Savior of our souls knows that, in order to soothe our spirits, He'll do much better to fill our bellies first.

Jesus fully embraced his humanity, and his disciples'. And if I'm going to follow in his footsteps, I must fully embrace my own. I've been doing it all wrong. I've been trying to shove cement down people's throats, when they are dying of thirst. Most people aren't looking for super spiritual revelations and deep theological dissertations. In the ebb and flow of everyday life, we aren't longing for earth-shattering Truth or soul-shaking experiences in a radical worship service.

After years of frustration with black and white answers to grey questions, I grew so frustrated that I nearly abandoned faith altogether. Life is not black and white. And those who believe it is, often push away the rest of us.

In the words of Richard Rohr:

People who've had any genuine spiritual experience always know that they don't know. They are utterly humbled before mystery. They are in awe before the abyss of it all, in wonder at eternity and depth, and a Love, which is incomprehensible to the mind.

I think far too often, we confuse faith with religion. And faith with theology. And faith with denominations. And faith with doctrine. The moment we are no longer inviting to those who aren't just like us, we begin to harden. Cement swells or shrinks with the temperature, while water flows into every parched crack of our souls. Maybe cement cannot be moved, but it is water that nourishes us and brings life to us all.