These days walking up to a cash register can be an adventure. (And yes, the word "cash register" is almost an oxymoron.) You're confronted with a barrage of Tap, Swipe, Insert, Collect Rewards and Pay by Phone. As the checkout line lengthens behind you, you tentatively insert your new "Chip" credit card into the new chip credit card reader in the new POS (point of sales) system. (Often this means nearly snapping your card in two since the retrofit systems sit atop old counters that often don't have ample "swipe" clearance.)

Chip inserted. You wait. Nothing happens.

"My card is inserted. Nothing is happening," you say to the cashier loud enough that the crowd growing behind you acknowledges that it's technology's fault. Cheerful but weary the cashier tells you, "The new system's not activated yet. Use the swipe, don't insert."

Moments later, still no sign of life from your system, the cashier adds, "No, not like that (they've identified you as a newbie now). Now, just wait. It takes a minute or two."

Cashier, customer and queue -- we all find ourselves in the midst of a technology rollout. If you remember the nationwide switch from the AT&T monopoly to a free market of innovative but unruly landline competition, or the day we pulled the nation's switch on analog TV, you'll know that big switches like this are never pain free.

EMV (its name comes from Europay, MasterCard and Visa, the project masterminds) is a chip technology that's found on the new credit cards you have probably (70% of us) been issued. You know you have an EMV enabled card when you see the little circuit-like looking chip on your card in addition to your trusty magnetic stripe on the back. The magnetic stripe card has been in use since the 70's and consumers are skilled at speed-swiping them through the slot. 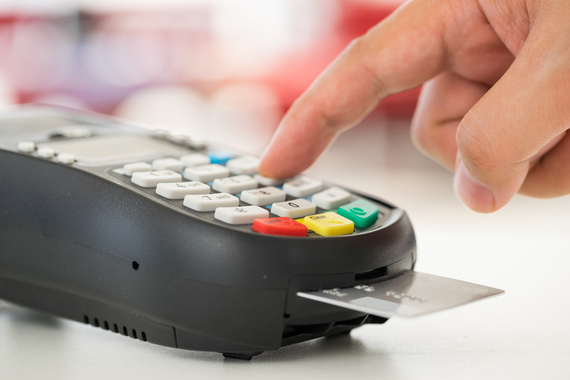 Usually newer tech means faster tech but that's not the case with EMV. Chip based cards are actually slower than mag based cards because there's a lot more data being transferred back and forth compared to the swipe. Your card, the POS system and your card issuer are having a high tech chat that includes encryption and randomizing your data. More secure, yes. More time consuming? That too. (I've counted 10 seconds on average.)

The rollout of EMV enabled credit cards in the US was designed to reduce one type of credit fraud - stolen cards. It was not an Act of Congress, or a law, but rather part of a self-mandated effort of payment companies, banks and merchants to reduce fraud. While businesses aren't being forced to comply there is the Sword of Damocles. If they fail to upgrade to new EMV-POS systems, they'll be liable for fraudulent charges incurred from mag stripe fraud. Merchants are skittish about their new liability. We're already seeing an increase in fraud moving to other places, in particular online stores and merchants whose stores haven't made the switch to chip technology.

Thirty million American consumers are affected by fraud each year says Steve Pociask of the American Consumer Institute. That's a disproportionately large number compared to fraud in other countries. At a recent DC meeting discussing the state of the EMV rollout, Pociask and Liz Garner, of the Merchant Advisory Group, both expressed concern that the US rolled out a chip and signature system which is nowhere near as safe as the chip and PIN cards used in Europe. Chip and PIN requires a second form of authentication by asking you for a personal code.

So who's on first after six months of switching and upgrading since the October 1st EMV chip card rollout was announced? The credit card companies are just about at the halfway point with 50% of cardholders possessing the new chip cards. The merchant transition has been slower, with only 37 percent of retailers indicating they were EMV compliant, according to a survey conducted by The Strawhecker Group. Who's to blame? The National Retail Federation contends that most merchants have the new equipment; they're just waiting on certification of their new systems. Card issuers counter that merchants have got to certify their entire systems from the card to carrier and everything in between including any third party software that the stores may be running. It takes a while. Finger pointing will continue as the wrinkles are smoothed.

And something is being done about EMV's lengthy wait times at the register. At a recent conference on electronic transactions in Las Vegas, Visa made news by announcing its Quick Chip solution promising to speed up the time it takes to process an EMV transaction to under two seconds. MasterCard just followed suit by introducing M/Chip Fast to increase performance. For data junkies, Cardflight, a company that sells POS equipment, has been tracking the migration.

Glass half full or half empty? Jason Oxman, CEO of Electronic Transaction Association offered a numbered perspective on the overall goal, "replacing a magnetic stripe ecosystem of 1.2 billion cards and 8 million merchant acceptance locations. The fact that only six months after the start of the transition we have 1.2 million chip card merchants and 600 million chip cards in market is, I think, great progress."

Don't get too comfy though. With EMV chip cards, the rollout of digital payments is still in its training wheels' days. The chip and PIN solution is being debated at this moment and many of the new POS systems are in stealth mode for next gen payments. They're ready to accept NFC payments (NFC is similar to EMV in terms of fraud protection, but NFC can be handled using your mobile device - no card required). Already, there are technologies from companies like MasterCard that can recognize a selfie or a fingerprint to verify and authorize your payment.