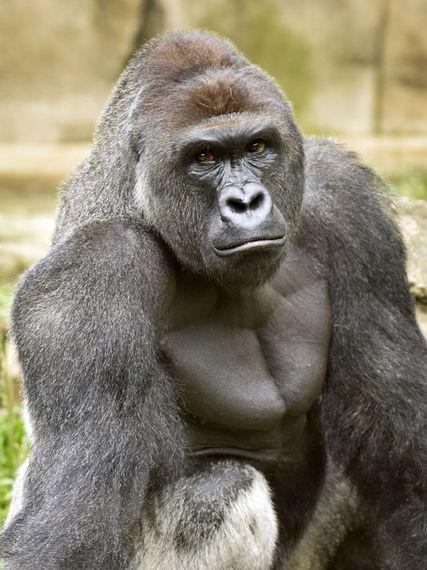 Last week, Harambe, a 17-year-old western lowland gorilla at the Cincinnati zoo, was tragically shot and killed when an unattended 4-year-old boy managed to climb over the zoo's gorilla enclosure fence and then fell into the pit. Harambe was shot after a hurried life-or-death decision had to be made and it was decided that he might harm or even kill the small boy. Whether Harambe would have harmed the boy or not, we'll never know. Harambe is dead. As with the killing of Cecil the lion last year, another iconic endangered species briefly makes the national news, gains momentary attention, generates widespread sympathy, but then just as quickly, the news moves on to other more interesting stories like the Chewbacca Mom. Sadly, the threat to the future of the gorillas remains, even as our short attention span shifts to other subjects. Gorillas in the wild remain critically endangered, and their numbers continue to drop. The problem though, as others have pointed out, is that the real threat to gorillas isn't being shot by zoo keepers. The real threat to gorillas, in part, is your smartphone.

Harambe's story this week reminded me of how ironic I've always thought it is that smartphones today often come with "Gorilla Glass." Most people know that the glass covers are called Gorilla Glass because they are supposed to be tougher than regular glass and resist cracking and shattering when dropped. But what most people don't know is that that there is another darker meaning to the term "Gorilla Glass." Gorillas are being killed because of smartphones. No, smartphone manufacturers aren't grinding up bits of gorilla to make the special Gorilla Glass, but smartphones require very small amounts of a material called Columbo-Tantalite, or coltan, which is primarily found in the Congo in Africa. Unfortunately, gorillas are also found in the Congo, where their numbers continue to drop every year. There are four gorilla subspecies, the Western lowland gorilla, the (Western) Cross River gorilla, the (Eastern) Mountain gorilla, and the Eastern lowland or Grauer's gorilla. All four subspecies live in a small area of equatorial Africa, including the Congo, and all four subspecies are either Endangered or Critically Endangered. Those gorillas in the Congo are specifically threatened by the mining of this material called coltan, which is needed for making smartphones. While much of the coltan in the Congo is mined legally, because of the worldwide demand and high price, more coltan is mined illegally in the Congo by local militia groups. The horrifying thing is that at these remote illegal mining operations, to feed the miners, poachers are hunting and killing gorillas as a food source. I'll say it again because it can be hard to believe: to feed the miners, they are killing and eating gorillas.

What can be done about this?
Looking at the big picture, at this point, there's no way of knowing if your smartphone uses coltan from one of these illegal mining operations. The legal and illegally produced coltan mixes on the worldwide market. But perhaps in the future, just as we have dolphin-safe tuna, blood-free diamonds, and free-trade coffee, we can have certified-gorilla-safe smartphones. There is also the potential that another source of coltan has been found in Greenland. But both these solutions are only possible in the long term, and may end up being too little too late, or not working out at all. So what can be done right now?

What you can do.
There is something about this problem that you can do, and although the difference it might make is incredibly small, it may make a difference, and any effort no matter how small, when repeated over and over by more and more people, the cumulative efforts add up. The key is to reduce the demand for coltan, and you can help by thinking twice before upgrading or replacing your current smartphone. I make a point of regularly reminding my two kids that Reduce, Reuse, Recycle is not just some empty catchphrase to parrot and forget. People should live by it. And Reduce and Reuse means CONSUME LESS. Don't be so quick to replace your iPhone or other smartphone every time there's a newer version. I'm not anti-smartphone, and I'm not advocating people shouldn't have smartphones. Although I may have been a smartphone-skeptic in the past and actually stuck with my handy flip phone up until just a few years ago, I did finally break down and get a smartphone, and now I fully understand how helpful and useful they can be. I'll be the first to admit that my family has three smartphones, and we'll be getting a fourth phone this fall for my son when he starts junior high. I get that smartphones are worth having, but I don't think they should be treated as semi-disposable items and replaced so often. We are still using the first smartphones we ever got, and I have no plans to upgrade or replace them. They still work. And by not replacing them, I like to think I'm doing my small part to help the gorilla.

So the next time someone shows you the latest and greatest feature on their brand new smartphone, remember not only Harambe, but all of the world's gorillas, and ask yourself if you really truly need that new smartphone, or if maybe you can wait until next year and think about it then. The gorillas will thank you.