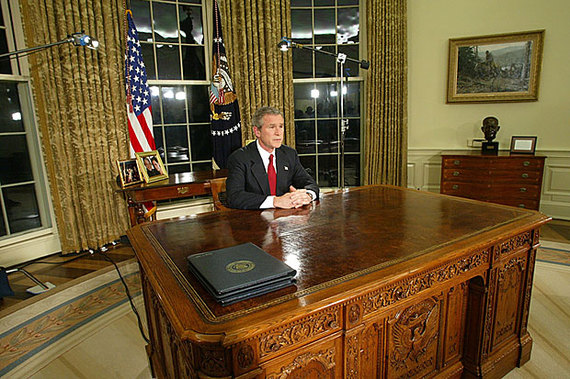 Soon after 9/11, the Bush administration led the country with confidence and bravado, calling out an Axis of Evil and offering a bold new plan to remake the map of the Middle East. Unfortunately, bringing democracy to Afghanistan and Iraq proved more difficult than Cheney, Rumsfeld, Rice, and Bush had promised Americans when selling both wars. While Dick Cheney still holds the senile view that Obama is to blame for Iraq's current demise, the reality is that William Kristol, Robert Kagan, and all the other necons who wrote essays like Bombing Iraq Isn't Enough in The New York Times (as early as 1988) failed to accurately predict the future. The Bush Doctrine policy of "preventive war" not only failed to prevent future conflicts in Iraq and the Middle East, but also created a power vacuum that emboldened renegade and genocidal groups like ISIS.

Sadly, President Bush's September 20, 2001 Address to a Joint Session of Congress now seems like a hopefully naïve, almost innocent fantasy compared to the nightmare erupting today in Iraq. Bush's words that day should be the soundtrack for today's televised chaos:

Our war on terror begins with Al Qaeda, but it does not end there.

It will not end until every terrorist group of global reach has been found, stopped and defeated.

Americans are asking "Why do they hate us?''

...Americans are asking, "How will we fight and win this war?''

...we will pursue nations that provide aid or safe haven to terrorism. Every nation in every region now has a decision to make: Either you are with us or you are with the terrorists.

...Our nation, this generation, will lift the dark threat of violence from our people and our future. We will rally the world to this cause by our efforts, by our courage. We will not tire, we will not falter and we will not fail.

...Fellow citizens, we'll meet violence with patient justice, assured of the rightness of our cause and confident of the victories to come.

In all that lies before us, may God grant us wisdom and may he watch over the United States of America.

Today, after two decade-long counterinsurgency wars have resulted in tremendous sacrifice by the U.S. Armed Forces and fledgling governments in Afghanistan and Iraq, Bush's words in 2001 could not have been less prescient. God did not grant us wisdom and we indeed faltered and perhaps even failed in the overall mission of nation building abroad. We know now that we can't destroy every terrorist group in the world and the atrocities committed by ISIS show that even the most powerful nation can't predict the future; especially in regards to what could happen when it left Iraq.

After 4,804 U.S. soldiers died in Iraq and 2,340 U.S. soldiers died in Afghanistan, one million U.S. soldiers wounded in both wars, and a potential cost of up to $6 trillion, the last thing Americans need to see is video of fanatics executing civilians in Iraq. Alas, our optimism in 2001 is now met with the cold realism of failed expectations and a terrorist group on the march; conquering city after city while murdering inhabitants of territory we had previously liberated from Saddam Hussein. According to ABC News on July 8, 2014, the United States is still very much involved militarily in Iraq and ethnic groups like the Yazidis still face threat of annihilation, this time from ISIS instead of Saddam Hussein:

Declaring that "America is coming to help," President Barack Obama is authorizing U.S. airstrikes if necessary and airdrops of humanitarian aid in northern Iraq to counter advancing Islamic militants and the threat they pose to Americans as well as Iraqi civilians.

...The Yazidis, who follow an ancient religion with ties to Zoroastrianism, fled their homes after the Islamic State group issued an ultimatum to convert to Islam, pay a religious fine, flee their homes or face death.

...The president cast the mission to assist the Yazidis as part of the American mandate to assist around the world when the U.S. has the unique capabilities to help avert a massacre. In those cases, Obama said, "we can act carefully and responsibly to prevent a potential act of genocide."

One of the reasons we toppled Saddam was because he gassed his own people and yet over decade later, Iraq's ethnic groups are faced with similar genocidal intentions; this time from ISIS.

As for the ruthlessness of ISIS, Human Rights Watch on July 19, 2014 explained in detail they type of atrocities they're committing on a daily basis:

The Islamic State of Iraq and Sham (ISIS) is killing, kidnapping, and threatening religious and ethnic minorities in and around the northern Iraqi city of Mosul.

Since capturing Mosul on June 10, 2014, the armed Sunni extremist group has seized at least 200 Turkmen, Shabaks, and Yazidis, killed at least 11 of them, and ordered all Christians to convert to Islam, pay "tribute" money, or leave Mosul by July 19...

"ISIS should immediately halt its vicious campaign against minorities in and around Mosul," said Sarah Leah Whitson, Middle East director at Human Rights Watch. "Being a Turkman, a Shabak, a Yazidi, or a Christian in ISIS territory can cost you your livelihood, your liberty, or even your life."

... ISIS has also tortured some of its detainees, Human Rights Watch said.

"ISIS seems intent on wiping out all traces of minority groups from areas it now controls in Iraq," Whitson said. "No matter how hard its leaders and fighters try to justify these heinous acts as religious devotion, they amount to nothing less than a reign of terror."


Bush's famous "they hate our freedoms" quote now seems like an insultingly vapid way to analyze the current situation in Iraq. The decision to invade in 2003 opened up a Pandora's box of problems and unforeseen catastrophes and while Obama inherited the war in 2008, there was nothing he could have done (short of invading Syria or implementing another surge in Iraq) to eliminate the threat of a group like ISIS. With so much effort and sacrifice from the U.S. Armed Forces just to build a new Iraqi government and survive daily attacks from insurgents, it was impossible to foresee the ascent of a group that even Al-Qaeda has disassociated itself with and feels is "not playing nice" with other terrorist groups.

Looking into the crystal ball only weeks after 9/11, President Bush envisioned a Middle East where democracies in Afghanistan and Iraq would propel other nations to aspire to our political value system. In 2014, a sad testament to the futility of neoconservative wishful thinking illustrates that we still have to continue military engagements in Iraq because a terrorist group (not named Al-Qaeda) is conquering territory. The tremendous cost imposed upon this country by hopeful neoconservatives and a naïve President Bush "leading from in front" was said to be the removal of a dictator in favor of self determination; not the collapse of Iraq.

In addition to the lives lost and suffering caused by Bush's preemptive war in Iraq, a Harvard study in 2013 states,

The potential interest cost of the US war debt reaches into the trillions; but of greater consequence is the fact that we deliberately chose to finance the wars in this fashion -- passing on the costs to future generations.

Unfortunately, we didn't have a Tea Party bemoaning the national debt or responsible GOP lawmakers asking for a tax to pay for the war. From the potentially $6 trillion for both wars, the interest alone on those wars could reach trillions; representing a substantial portion of the national debt in future generations. Financial concerns aside, the absolute failure of people like Dick Cheney and Donald Rumsfeld to implement neoconservative foreign policy objectives has resulted in a resumed military campaign in a war that should have already ended. Today's madness in Iraq started with good intentions over a decade ago, but we all know the saying about roads paved with good intentions.