ISIS fighters aren't getting any year-end pay raises this January. In fact, in response to mounting military and economic pressure across Syria and Iraq, the terror group is slashing salaries, newly-leaked ISIS documents show.

The administrative records reveal that ISIS leaders in Raqqa, the group's de-facto capital in Syria, reduced the monthly salaries of all fighters by half sometime around November or December of last year, just as the U.S. began to dramatically increase its airstrikes against ISIS-held oil fields and other financial targets.

Read More: There's Only One Way To Bleed ISIS Dry

"On account of the exceptional circumstances the Islamic State is facing, it has been decided to reduce the salaries that are paid to all mujahideen by half," reads the official notice, which was translated and first published by Aymenn Jawad al-Tamimi, an ISIS expert and fellow at the Middle East Forum. "It is not allowed for anyone to be exempted from this decision, whatever his position."

It also notes that fighters will continue to be paid twice a month, as usual. 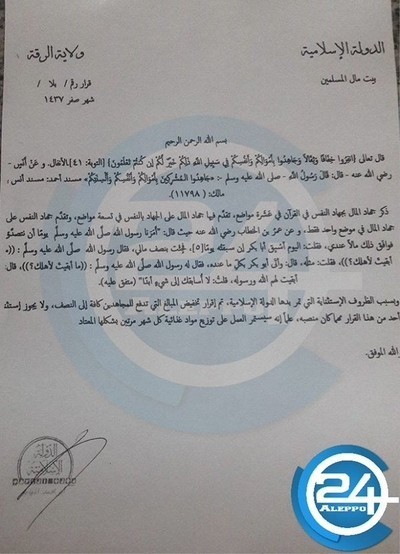 Newly-leaked ISIS documents show that leaders slashed military pay in half for fighters back in November or December. CREDIT: AYMENN JAWAD AL-TAMIMI

Though precise figures are not available, most ISIS fighters probably earned a few hundred dollars a month prior to the pay cut, said al-Tamimi, who, through a network of sources operating in ISIS-held territory, has obtained and published hundreds of official Islamic State documents. He told Vocativ that military upkeep costs ISIS tens of millions of dollars a month and accounts for roughly two-thirds of the terror group's operating budget.

The slash in fighter pay signals the latest setback for the terror group and lends new support to U.S. claims that its strategy to disrupt ISIS' revenue stream is working. ISIS militants have lost 40 percent of the territory they once held in Iraq, including the city of Ramadi, and 20 percent of their territory in Syria, according the U.S. military.

Meanwhile, a surge in U.S.-led airstrikes have continued to lay waste to ISIS' economic infrastructure, which has made it the world's richest terror organization. Last week, Pentagon officials announced that a pair of 2,000-pound bombs obliterated an ISIS cash facility in Mosul that contained "tens of millions of dollars" in hard currency.

"Combined with all of the other strikes that we've done on ISIL's gas and oil production and distribution capabilities and strikes against his economic infrastructure and the various sources of revenue, you can bet that [it] is feeling the strain on [its] checkbook," Gen. Lloyd Austin, the head of U.S. Central Command, told reporters last week.

The diminished salaries for ISIS fighters could dissuade some from seeking to join the group's military ranks, said al-Tamimi. However, thousands of foreign fighters continue to flock to ISIS-held territory. More than 36,500 aspiring fighters from over 100 countries have left home to join the militants in Iraq and Syria since the conflict began--with 6,000 more joining since last fall, according to the National Counter Terrorism Center.