This post originally appeared on artnet News by Brian Boucher 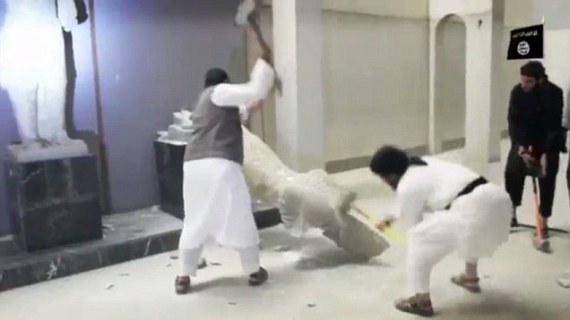 While no one should take ISIS to be any less of a threat than it is, we might take some small consolation from the possibility that some of the sculptures the militants smashed on video this week at the Nineveh Museum in Mosul, Iraq, were replicas. While an Assyrian stone lion smashed in the videos is indisputably a terrible loss, the destruction of replicas in this particular case may soften the blow.

"According to archaeologists, most if not all the statues in the Mosul museum are replicas not originals," reports Channel 4 News, London. “The reason they crumble so easily is that they're made of plaster. ‘You can see iron bars inside," pointed out Mark Altaweel of the Institute of Archaeology at University College, London, as we watched the video together. ‘The originals don't have iron bars.'"

“According to the British Institute," adds Channel 4, “the originals were taken to Baghdad for safekeeping. ISIS probably wouldn't care about the distinction. One false idol is the same as another."

All the same, reaction around the world has been swift and horrified (see The Metropolitan Museum and Others Respond to ISIS Destruction of Assyrian Sculptures). ISIS has also done a brisk business in smuggling antiquities out of the region for sale on foreign markets (see Increase in Antiquities Smuggling Busts amidst Government Crackdown), though the international trade is mostly focused on smaller items.

Why are the militants so bent on destruction of the region's cultural heritage? Amr al-Azm, a Syrian anthropologist and historian, told the New York Times that the destruction of artworks, and the slaughter and capture of Assyrians and others in the area that it accompanied, are strategic. While the militants claim that they are smashing the sculptures because they are idols forbidden by Islam, he posits that “It's all a provocation" aimed to lure U.S. and Iraqi forces to try to retake Mosul. “They want a fight with the West because that's how they gain credibility and recruits," Azm said.

ISIS has “repeatedly threatened to destroy [the museum's] collection," according to the Times, since they took the city in June.

Did ISIS Smash Fake Sculptures In Mosul? Experts Say Many Of Them Were Replicas
Fighting in Iraq