Mass murder in Paris by gunmen affiliated with the Islamic State should be a game changer for Washington and the West. ISIS's proud claim of responsibility for this obscenity should amount to a self-imposed death sentence. While beating these barbarians in Iraq may take time owing to roots they have sunk in an aggrieved Sunni Arab minority, no such constraints exist in Syria. The proper near-term response to this declaration of war on civilizations is for Washington to organize and lead a regional and European ground combat coalition to kill ISIS in Syria.

Whatever differences of opinion may have existed in the U.S. intelligence community about the willingness and ability of ISIS to project terror beyond Syria and Iraq, they are now resolved. The U.S. needs to step up now, rather than waiting for an atrocity on its own soil.

If what happened in Paris had taken place in any American city or town, the Obama administration's aversion to "boots on the ground" (beyond 50 special forces personnel) against ISIS in Syria would presumably become as irrelevant and inoperative as a chemical red line. Will a 9/11-type assault on an ally produce the same muscular reaction as an ISIS attack on America presumably would? It should, even if the alliance per se may not move the president. Given the easy availability of lethal weaponry in the U.S. and the fact that Washington is the mother of all targets as the leader of a 65-member anti-ISIS coalition, President Barack Obama cannot avoid addressing the risk we face.

The U.S. needs to step up now, rather than waiting for an atrocity on its own soil.

For over a year, coalition forces have chased ISIS operatives in eastern Syria with high performance aircraft: bombing their buildings, hitting their oil fields, neutralizing high-value individuals and killing plenty of foot soldiers when they foolishly massed forces to try to take a Kurdish town. But where wars are won -- on the ground, progress has been glacial.

A train-and-equip program -- too small and too slow even under the best of circumstances, foolishly sought to attract Syrian rebels dedicated to resisting Syrian dictator Bashar Assad to an exclusively anti-ISIS mission. Kurdish militiamen intent on establishing an autonomous zone in Syria along the Turkish border have been of some value. But they have neither the strength nor the motivation to sweep ISIS from all of eastern Syria. Training and arming eastern Syrian Arabs will take time, and time is not a friend.

From the beginning the battle against ISIS in Syria, there has been no ground combat component capable of decisively defeating this band of murderers, thieves and rapists. This is beyond regrettable.

The U.S. should aim to enlist those who are now most directly affected by ISIS -- Syria's neighbors and Western Europe -- to carry the larger part of the ground combat burden.

Organizing a regional and Western European ground combat component to liquidate the ISIS presence in Syria would be a diplomatic heavy lift for the Obama administration; not as heavy perhaps as the power lifting done 25 years ago by Secretary of State Jim Baker to build a coalition for the liberation of Kuwait, but no easy task for sure.

The challenges are easy to list. The Turkish Army is not combat-hardened and would be required to pass through Kurdish lines in Syria without pausing to inflict damage. The Jordan Armed Forces lack a sustainable expeditionary capability. Gulf contributors are distracted by Yemen. None of the foregoing are volunteering to put boots on the ground in Syria. Russia, Iran and the Syrian regime hope to keep ISIS in business at least until they eliminate all Syrian nationalist alternatives to Assad and the ISIS "caliph." With the possible exception of France, the default position of what passes for leadership in Western Europe is to hold the coat of Uncle Sam. If any of this were easy it would probably already have been done.

Anyone signing up to an American-led effort will first have to be convinced that Washington is in for the duration and that some measure of American skin -- on the ground in Syria -- is in the game. This is far from mission impossible. But it will not be an easy sell. Indeed, the real challenge may be less one of tough customers than of an introspective, poorly motivated, confidence-lacking sales force. Sadly, the default position of the Obama administration has been to recoil from the operationally difficult, substituting pessimistic no-can-do analysis for action, seeming at times to be trying to make it to January 20, 2017 with talking points and lawyer's arguments.

Paris is not the only target.

The Paris outrages may and should shock Washington and the rest of the West from their apathy, indifference and lethargy. There is no reason why the war against ISIS in Syria has to be a long, twilight struggle featuring oceans of ink and hours of bureaucratic effort spent on multiple "lines of effort" like cutting off financing and countering the ISIS "message." Kill them. Kill them quickly. Keep them dead by protecting Syrian civilians from the non-stop atrocities of Bashar Assad, a person whose collective punishment survival strategy -- fully supported by Iran and Russia -- is a recruiting gift that keeps on giving to ISIS.

In addition to some American boots on the ground, the U.S. should aim to enlist those who are now most directly affected by the ISIS monstrosity -- Syria's neighbors and Western Europe -- to carry the larger part of the ground combat burden. Perhaps Paris and Washington can spearhead a NATO response to a wanton attack on a member state. Perhaps a coalition of the willing can be assembled. Competent ground forces supported by American-led air power can make reasonably short work of a rabble, even though operations in built-up areas will be difficult. The alternative is to wait for indigenous forces to attain critical combat mass. It would likely be a long wait, leaving ISIS free to sink roots inside Syria and commission atrocities abroad.

Modalities are important. But if what happened in Paris cannot put an end to business as usual by a listless, leaderless West, who can guarantee that a similar outrage in the U.S. would actually provoke a response of sufficient lethality to destroy the perpetrators? If these outrages are not enough to awaken the West, what will it take? Time is the enemy. Paris is not the only target. 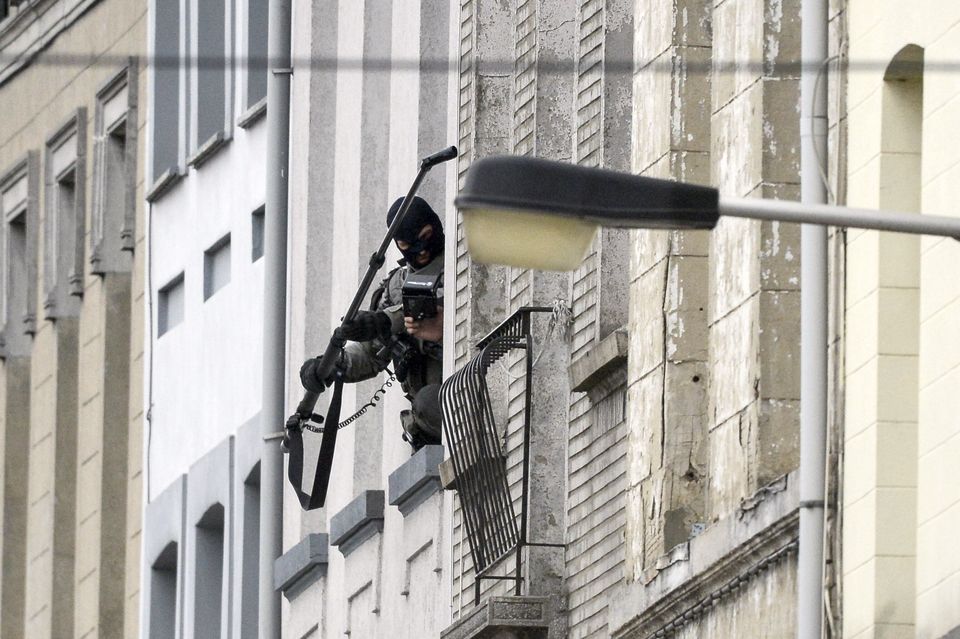