ISTANBUL -- Last week saw the death of Yaşar Kemal, an ethnic Kurd who is regarded as one of Turkey's greatest novelists. The very same day, the Peoples' Democratic Party (HDP), a left-wing Turkish political party focused on Kurdish affairs, gave a joint press conference with the government, urging the armed insurgency known as the Kurdistan Workers' Party (PKK) to lay down its arms.

This call for peace may herald the end of the armed conflict between the PKK and the Turkish state, a conflict that began in 1984 and effectively became a civil war during the 1990s. Founded as a Marxist-Leninist organization by Abdullah Öcalan in 1978, the PKK championed the political and cultural rights of the Kurds. It also sought to end the dominance of the ağas (tribal landlords) and şeyhs (religious leaders) in Turkey's Kurdish regions, much like the struggle faced by the hero of Kemal's famous 1955 novel, Memed, My Hawk.

Indeed, Kemal's literary oeuvre, extolling human dignity in its fight against injustice and tyranny, has long been a source of inspiration for the Kurdish movement in Turkey. Kemal's novels suggest that this struggle will only succeed through wide-scale participation by the poorer classes of society. Accordingly, the Kurdish movement has attempted to steadily broaden its base of support over the past 30 years by publicizing its demands to the Kurdish masses.

Kemal devoted his own life to the cause of peace, making frequent appeals in his later years to end the ongoing violence. Recently, Turkey has begun to see the fruits of his labors.

In March of 2013, Öcalan (who has been imprisoned on Turkey's İmralı Island for over a decade) proclaimed a cease-fire between the PKK and the Turkish state, offering hope of a solution to this 30-year-old conflict, in which a staggering 40,000-plus people have died.

By comparison, less than 1,000 lost their lives in the rebel group ETA's 40-year conflict in Spain, while 1,800 died in nearly three decades of sectarian strife in Northern Ireland.

How ISIS Changed the Kurdish Question

Why have Öcalan and Turkey's ruling AKP waited until now? Part of it can be explained by the evolution of Turkey's Kurdish movement, with its steadily-expanding base of support. The Kurds no longer need to take to the mountains and fight in order to make their voices heard.

This past October, following Islamic State's siege of the Syrian border town of Kobani, there were rumors that the Turkish government was aiding ISIS. Hundreds of thousands of Kurds in eastern and southeastern Turkey took to the streets in protest. For a full two days, the Turkish government was unable to maintain control in some cities and towns, and dozens of people were killed. The situation only returned to normal after an intervention by Öcalan. Both sides are now aware that the rules of the game have changed: a reignited conflict between Turks and Kurds could turn into a civil war resembling 1990s Yugoslavia.

Another key factor is the PKK's changing image in the West. In addition to bombing ISIS targets around Kobani, the United States has been providing arms to the Syrian branch of the PKK, the Democratic Union Party (PYD), to help it fight ISIS.

ISIS has now retreated from Kobani, and the PYD controls a region in northern Syria the size of New Jersey, a region known as Rojava. There, in accordance with Öcalan's doctrine of "democratic autonomy," Arabs, Assyrians and Kurds share power, and all uphold the ideal of a modern secular society. By contrast, just a few hours south, in ISIS's de facto capital of Raqqa, women are forced to wear burqas, and beheadings are carried out in public. Last month, French President François Hollande held a top-level meeting with PYD leaders. In short, the PKK is trying to shed its image as a "terrorist" organization in the eyes of the West and enter into a partnership with the U.S. and the EU. It has nothing to gain from a renewed declaration of war upon Turkey, a NATO country.

A Real Chance for Turkey's Kurds

Moreover, the HDP stands a real chance of gaining seats in parliament in Turkey's June 2015 elections. For the past 20 years, Kurdish parties in Turkey have typically received around 6 percent of the vote, circumventing the 10 percent threshold for parliamentary representation by running as independent candidates. Such a high threshold is found in no other parliamentary system in the world; it was devised precisely in order to prevent the emergence of a Kurdish party in parliament.

However, thanks to the cease-fire in place since March 2013, the HDP's leader Selahattin Demirtaş managed to net an unexpected 9.78 percent of the vote in the August 2014 presidential elections. In order to tip the scales in its favor this year, the HDP needs the support not just of Kurds but also of left-wing voters throughout the country.

As for the AKP, it receives roughly half the Kurdish vote in the east of Turkey, consisting of conservatives as well as those seeking to benefit from AKP largesse. Erdoğan hopes to reach out to Kurds by appealing to a shared Islamic identity, eventually allowing him to install Kurdish puppet leaders, as Putin did with Chechen President Ramzan Kadyrov.

At this point, both Erdoğan and Öcalan clearly think that continuing the struggle through non-violent means is more in their interest. Erdoğan is attempting to consolidate his share of nearly 50 percent of the vote by promoting himself as the leader who finally achieved peace.

The AKP era witnessed the removal of certain obstacles to the Kurds' cultural rights. There is now a state-run Kurdish-language television channel, and those who wish to do so can enroll in Kurdish language private courses. But these are basically token measures. There has been no progress on more substantive reforms such as primary, secondary and university education in Kurdish, or giving greater autonomy to local governments in Kurdish-majority regions. It is impossible to see the Erdoğan regime carrying out such reforms, given its habit of criminalizing and suppressing all oppositional protests. Erdoğan must now deal not only with the PKK in Turkey, but also with de facto independent Kurdish states in northern Iraq and in PYD-controlled northeastern Syria.

Without a doubt, the question on everyone's mind is whether the HDP can exceed 10 percent of the vote in the June elections. If not, then Turkey will face the spectacle of a parliament without official representatives of the Kurdish movement, despite the latter's receiving around 4 million votes. This will give rise to a serious crisis of legitimacy in Turkish politics.

Turkey's Kurdish movement has managed to survive and grow for 30 years in the Middle East, where politics is a dangerous business. Whether in Iran, Iraq, Syria or Turkey, the Kurds are now one of the key players in the Middle East, having won the world's admiration for their defeat of ISIS in Kobani. Should Turkey's Kurds clear the 10 percent electoral hurdle, there is no doubt that they will become even more influential. Secular, democratic and a champion of women's rights, the Kurdish movement has emerged as the most serious rival to radical groups like ISIS, with its medieval mentality.

An optimistic intellectual by nature, Yaşar Kemal famously stated, in an article titled "The Criteria for all Values: Peace," that humanity "was moving like a stream of light towards peace, freedom, and equality." In this time of great darkness in the Middle East, the Kurdish movement has reason to be hopeful about the future.

Amidst the Medieval Darkness of ISIS, the Kurds Stand for Secularism and Democracy in the Middle East
Kobani Freed 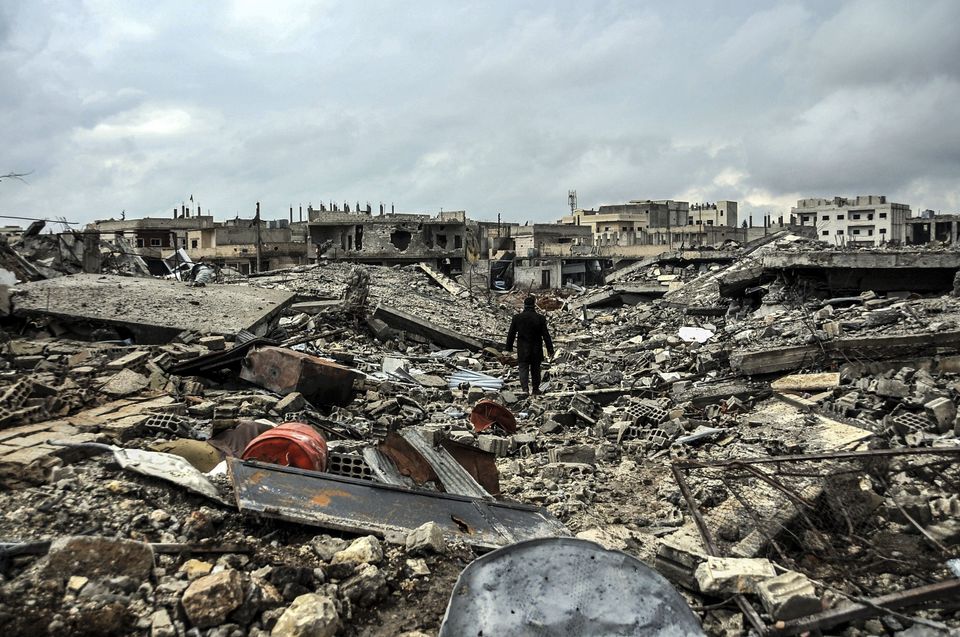 1 / 34
KOBANI, SYRIA - FEBRUARY 18: A man is seen near the wreckage left by fighting in the center of the Syrian town of Kobani (Ayn al-Arab) on February 18, 2015 after it has been freed from Islamic State of Iraq and the Levant (ISIL) forces. While civilians in the eastern parts of the city are refusing entrance to the area on suspicion of a trap, houses in other areas are being presented ready for use by their owners. (Photo by Eber Ayaydn/Anadolu Agency/Getty Images)
Anadolu Agency via Getty Images