Militants linked to the Islamic State group released a gruesome video on Sunday showing the beheadings on a Libyan beach of 21 Coptic Christians from Egypt. The brutal murders once again put the spotlight on the power vacuum in the North African nation and have raised concerns the failing state is proving to be fertile ground for extremist groups.

Saturday's killings weren't the first by Libyan fighters claiming allegiance to the Islamic State group, which has taken over parts of Iraq and Syria. IS-linked militants claimed responsibility for the January attack on a luxury hotel in Tripoli, which left 10 people dead. They also claimed a role in the murder of more than a dozen soldiers and the execution of two Tunisian journalists, The Guardian notes.

Many Libyan fighters in the past few years have joined extremist groups in Iraq and Syria like ISIS and the Nusra Front, and some of them have since returned, Frederic Wehrey, an expert at the Carnegie Endowment for International Peace notes. Wehrey explains that three Libyan militias have already pledged allegiance to the IS leadership in Syria. Drawing on Ottoman-era geographical names, fighters proclaimed the Barqa province of the Islamic State in Libya's east, the Tripolitania province in the west and Fezzan in the south.

It is unclear to what extent the militias are communicating and coordinating with the IS leadership in Syria's Raqqa. What is clear is the militants are thriving in violence-torn and leaderless Libya. “What makes Libya’s terrorist threat so confounding is that it is deeply embedded in a broader, more complex power struggle that has effectively split the country’s nearly nonexistent political and security institutions,” Wehrey aptly summarizes. 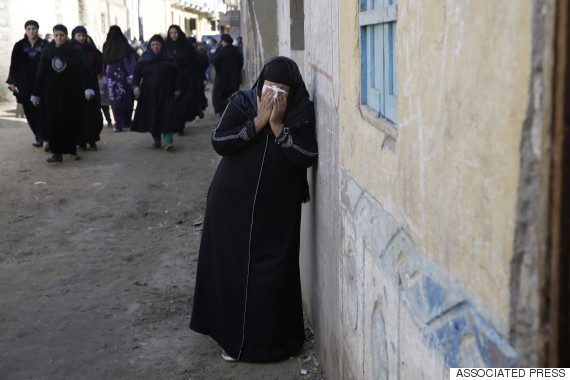 A woman mourns on Monday for the Egyptian Coptic Christians captured in Libya and killed by militants affiliated with the Islamic State group, outside of the Virgin Mary church in the village of El-Aour, near Minya, 135 miles south of Cairo. (AP Photo/Hassan Ammar)

Armed militias are everywhere in Libya, and many of them joined together in 2011 to oust longtime dictator Muammar Gaddafi. "It had been clear from the start that the militias were going to be a deeply troublesome feature of post-Gaddafi Libya," Jon Lee Anderson explains in The New Yorker. As the rebuilding of state institutions failed to materialize in the wake of Gaddafi's fall, different armed groups expanded their influence and acquired more and more weapons, and many even ended up on the government payroll. Yet while the militias set aside their difference to bring down Gaddafi, many are now locked in a vicious fight for control.

Since the 2014 elections, two major coalitions -- each with a parliament, prime minister and armed fighters -- have been battling for power. In June 2014, members of the outgoing Islamist-dominated parliament lost the vote to liberal and federalist candidates. The Islamists and their allies, however, refused to recognize the results. In August, "Libya Dawn," a loose coalition of militias including moderate and extremist Islamists, Berber militias and fighters from the city of Misrata, took over the capital city of Tripoli after a five-week battle, forcing the newly elected parliament to take refuge in the city of Tobruk, in Libya's east.

The other coalition, fighting what it calls "Operation Dignity," has the support of the parliament in exile and has vowed to fight terrorism and extremism. It is led by the controversial Benghazi general Khalifa Haftar and his Libyan National Army. Haftar started his career fighting for Gaddafi, but allied himself with Islamist fighters during the 2011 revolution against the strongman. The coalition unites troops from the old regime, as well as federalists and militias from Zintan and Benghazi.

Haftar currently controls parts of Libya's east, while Libya Dawn still holds sway over the capital. The United Nations is trying to negotiate a settlement between both groups, but to no avail so far. 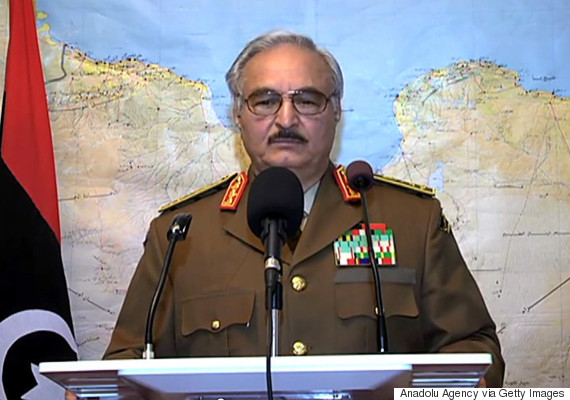 Egypt responded to the brutal IS killings this week with bombing raids on the group's training facilities, camps and depots in Libya. "What is happening in Libya is a threat to international peace and security," Egyptian President Abdel Fattah El-Sissi said. Sissi also called on the United Nations to authorize international intervention in Libya.

However, it is not the first time in the past year that Cairo sends its bombers over Libya. Since the summer, unidentified planes have bombed Islamist targets in the country in support of General Haftar's forces. American officials told The New York Times that the bombings were the work of Egypt and the United Arab Emirates, although both countries have not publicly acknowledged their involvement.

The bombings sparked widespread condemnation and prompted the U.S. and some of its allies to warn against foreign interference in Libya. Libya Dawn condemned this week's raids, calling the Egyptian president a “terrorist criminal and murderer.” 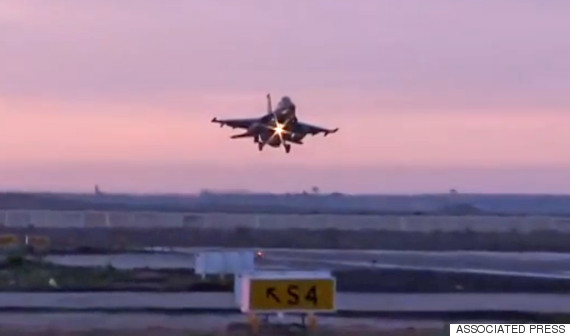 The fierce fighting in the past year has caused a humanitarian disaster in many parts of Libya. The United Nations warned in December that civilians have been caught in the militia fighting and fallen victim to indiscriminate shelling, abduction, torture and execution.

The UN estimates 400,000 people have been internally displaced and hundreds have been killed since the summer. Many of those who fled are lacking food and medical supplies.

Much of the country's infrastructure -- including oil facilities crucial to its economy -- is in ruins. "We cannot produce. We are losing 80 percent of our production," the chairman of Libya's National Oil Corporation, Mustapha Sanallah, told NPR this week, adding he thinks that Libya won't even earn 10 percent of the budget money it had in 2012.

More from The WorldPost on the Islamic State group:

- Former Child Soldier: "Don't Join ISIS" - Despite Kobani's Liberation From ISIS, Many Syrians See Little To Celebrate - Jordan Has A Huge Foreign Fighter Problem - 15,000 Foreign Fighters Have Joined Extremist Groups In Iraq And Syria. Here's Why They Went - How ISIS Uses OIl To Fund Terror - What’s Happening In Jordan Today Shows How The Arab World’s Strengths Are Also Its Weaknesses

An earlier version of this explainer appeared on The Huffington Post in August 2014.