Over the years, civil war, political turmoil, and military strikes have led millions of Syrian and Palestinian children to leave their homes and find refuge in Lebanon. Today, the Christian Iraqi children are the latest casualties of the fluid terror led by the Islamic State militants also known as ISIS -- children whose final memories of home are heavily armed men raiding their neighborhoods and schools.

Looking at his three young daughters, Goneyat Yousef recalled the day ISIS militants -- also known in Arabic as Daesh -- rampaged the girls' school in Mosul, a large city in Northern Iraq that's now under full control of the Islamic State. There, he said, the militants threatened to kill everyone if they don't immediately leave their town.

"They came to the school and threatened the girls. We had no time to leave, nothing to take with us; we had to leave or be killed or convert to Islam and await an unknown future for us and the children." Yousef said sitting next to his three daughters and wife on an old couch in a small room in unbearable heat that made everyone sweat without any option to cool down.

That's the last memory Oriana, 8, and her older sister Mariana, 9, have of their school: heavily armed men in black head covers, raiding their classroom and telling them to leave or to be killed. The fear could be sensed even in the eyes of their 2-year-old sister Ilana, who at the time was in their home with their mother.

This, is a vivid image for this family of five who escaped Iraq a month ago, only to now live off the charity of the Assyrian Christian Diocese in the Sadd al-Boushrieh neighborhood in Eastern Beirut. "Even now, when we tell them to go outside and play with children, they are afraid, they say they think Daesh will come and kill them," Yousef said with a grim smile. "They think Daesh is here as well."

Earlier this summer, ISIS began its brutal massacre against Christians, Yazidis and other ethnic and religious minorities and communities in Iraq and parts of Syria.

Since the Islamic militants took control of Mosul and parts of Erbil -- two of Iraq's largest cities -- thousands of Iraqi Christians fled their country, with many now taking refuge in Lebanon -- a majority Muslim country with the only Christian head of state in the Arab world.

"It's very hard to leave your house in a short time with no plan to sell or do anything," said Father George Youkhana, a leader of the Assyrian Diocese in Lebanon. He added that almost all the refugees "are desperate and hopeless and it is our duty as Christians and human beings to give back and help them gain trust in themselves once more."

Close to 70 percent of Christians in Iraq are Chaldeans who make up the majority of the displaced Christians in recent years. The Assyrians come next in number and almost all have left Iraq due to the recent turmoils and fear for their lives.

Aside from poverty and pending legal status, education is a primary challenge for the Iraqi families and their young ones

This fall, as a new school year begins in Lebanon, the Christian Iraqi children -- who once celebrated the first day of school in their hometowns -- may no longer be able to walk into a classroom.

There are severe language barriers for these Iraqis as they speak a different dialect of Arabic, and in other cases were only taught in Chaldean and Syriac -- dialects and languages that are not used in Lebanon.

"We are having a plan with UNICEF to see how we can have a program to be in line with these children, because there are language barriers, we need to find a way with the UNICEF, especially for younger children, how can we be in line with this and solve this issue," said Youkhana.
While both leaders of the Assyrian Diocese and the Chaldean Church believe this to be a major hurdle for the latest wave of refugees, they say finding a solution is as challenging as the problem itself.

According to the United Nations High Commission for Refugees (UNHCR), over the past decade, close to half a million Iraqi Christians have been displaced. Overall, Iraqis make up for almost 87 percent of the registered refugees and asylum seekers after the majority influx of Syrians and Palestinians who make up for almost 90 percent of all refugees in Lebanon.

When asked from Archbishop Kassarji, whether or not the government is assisting this crisis, he nodded his head and said, "No, no, no," adding that Lebanon -- a country of only four million is caught in the middle of a refuges influx from all over the region; and while UNHCR and other NGOs are mapping long-term programs for these people, the weight falls on Churches, local charities, and ordinary Lebanese and donors.

"As the Church it is our duty, we have to help, but it's not enough and I don't think U.S. and UN can do anything -- no one can do anything, it's a big problem," said Kassarji.

"The issues that the Iraqi children find difficult are similar to what Syrian children find difficult (language barriers, schools at over capacity and cost barriers," said Salam Abdulmunem of UNHCR who added that UNICEF does not have specific programs addressing the issue of Iraqi refugees but that they are "part of a larger response to the refugee crisis."

This is not the first wave of Iraqi refugees in Lebanon, rather a continuation of decades of displacement due to insurgency, terrorism, and sectarian violence. According to data from the US Department of State, after the US invasion of Iraq, in the years between 2004 and 2006 -- out of the estimated 1 million Christians, close to 300,000 of them left Iraq. Today, according to UNHCR that number has reached half a million.

In a leaked document on WikiLeaks that dates back to 2008, Archbishop Kassarji cautioned the United States and Michele J. Sison -- U.S. Ambassador to Lebanon at the time -- about the growing number of Iraqi Christians and their challenges in Lebanon. In particular, he made an explicit point on the crisis involving children and their education.

"Only one-third of the Iraqi Christian refugee children in Lebanon attend school because they need to earn money for their families," Kassarji told Ambassador Sison. He also added that children also faced problems attending school because of a difference in education levels and language.

While Lebanon is not a signatory to the 1951 Refugee Convention and its 1967 Protocol, there are close to two million refugees -- out of which many are not yet registered with UNHCR. The Iraqi refugees enter Lebanon with tourist Visas that are only valid for a few months. Afterwards, they have to register with UNHCR and await their asylum status.

Both Church leaders say there are hundreds and maybe thousands of Iraqis who have not yet registered with the UN -- and as for those registered, if conditions are found improved, they are sent back to Iraq -- a nightmare that almost all Christian Iraqis in Lebanon dread.

"I can't go back, I can not go back; I will go anywhere but Iraq. We are afraid, and we are not safe," said Saleem, an Iraqi grandmother holding her infant grandchild as she stood in line for food donations in the Chaldean Church of Beirut. Similar to the Yousof family, Saleem, her grandchildren and daughter are another victim of the ISIS atrocities in Iraq.

Today, the Yousof family and Saleem, her daughter and grandchildren are only two examples of the hundreds of families served by the Christian Churches in Lebanon since the beginning of summer, when the current wave of Iraqi Christians began fleeing their homes. They now solely rely on the help of their Churches with no legal status, home, or a certain future.

"How can we go back?" Oriana's mom said in tears. "Even our neighbor of forty years told us to leave." She said that after Daesh entered their village, their Sunni neighbor turned against them and said they have to leave. Whether it was out of fear or that they too joined the radical Islamic State, the mother said they will never feel safe and their children cannot survive under such "inhumanity and terror".

Back in their 15-square meter room in an apartment close to the St. Georges Assyrian Church of the East in Beirut, Oriana, her parents and two sisters await an uncertain future. Oriana is still drawing; she looks up into the camera, waves and continues to draw a house. 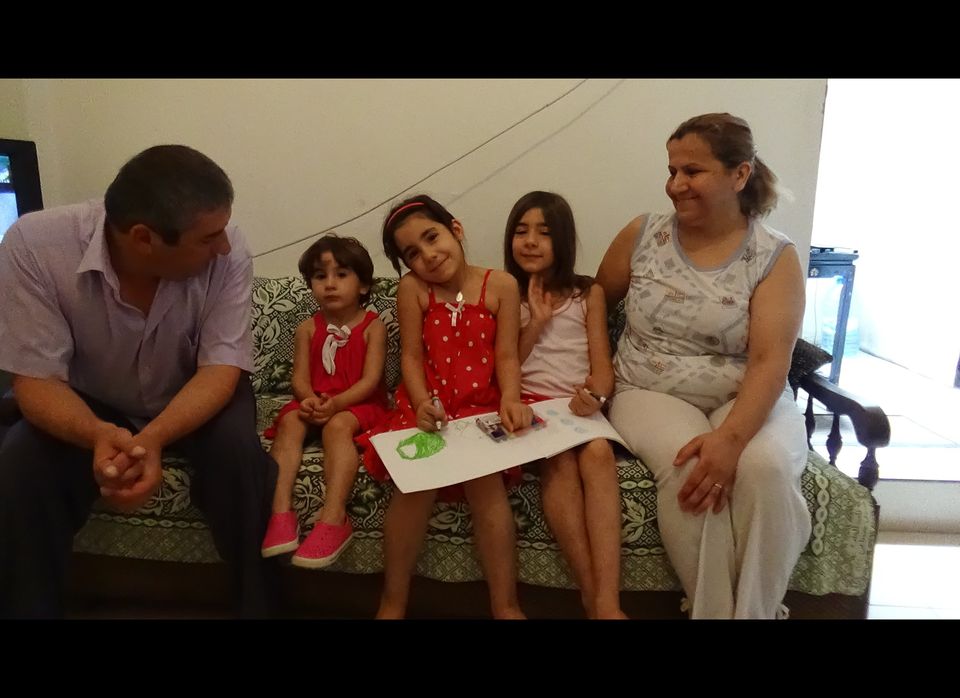 1 / 14
Despite the horror of fleeing ISIS militants from their hometown of Mosul, Iraq, the Yousof family thanks the God and tells me that they feel blessed to still have one another--even though, they don't know how they're going to survive in Lebanon.