They have live-tweeted amputations, carried out public crucifixions and have been disavowed as too extreme by al-Qaeda. Now they have taken over Mosul, Iraq's second biggest city. They are the Islamic State of Iraq and the Levant, or ISIS, a group of extremist Sunni Islamist militants, and they are rapidly becoming one of the deadliest and most prolific insurgent groups in the Middle East.

The assault was so brutal that soldiers in the Iraqi army left their posts and in some cases even their uniforms as they fled en masse, according to a report by the Washington Post. The assault has left the terror group in control of the city's airport, army base and other vital infrastructure. It provided them with cash from the city's banks and weapons from the local military posts. As the BBC notes, the fighting has also resulted in the rapid and fearful exodus of hundreds of thousands of people.

The seizure of Mosul is the latest event in the the rise of ISIS, once merely one of the many al-Qaeda-linked franchises that occupied the fractious and insecure regions of Syria and Iraq, but now a powerful autonomous entity that holds significant territory and resources.

Iraqi uniforms strewn on the road in Mosul. Troops discarded them & fled. The city is now under ISIS control. pic.twitter.com/3QvMiobHf8

ISIS is a group of radical hardline militants that has grown out of the al-Qaeda structure. In vastly simplified terms, al-Qaeda is an amalgam of different jihadist groups active in various regions, each with their own command structure but all ostensibly answering to al-Qaeda's core leadership, led by Ayman al-Zawahri.

As the BBC describes in their profile of the group, the formation of ISIS was announced in April of 2013, when the group was presented as a merger between the Islamic State of Iraq (ISI), an al-Qaeda affiliate, and the Syrian jihadist rebel group, Jabhat al-Nusra. Soon after the announcement however, the Nusra front rejected the merger, and al-Qaeda's core leadership as well denied the alliance.

The new organization went ahead anyway as ISIS, led by a man named Abu Bakr al-Baghdadi, and carried out a number of vicious attacks in Syria and Iraq. In June of last year the group was ordered by al-Qaeda's core to leave Syria, but the militants and their leader publicly rejected the order. As the New York Times explains, the move was a "watershed moment in the vast decentralization of al-Qaeda and its ideology since 9/11." 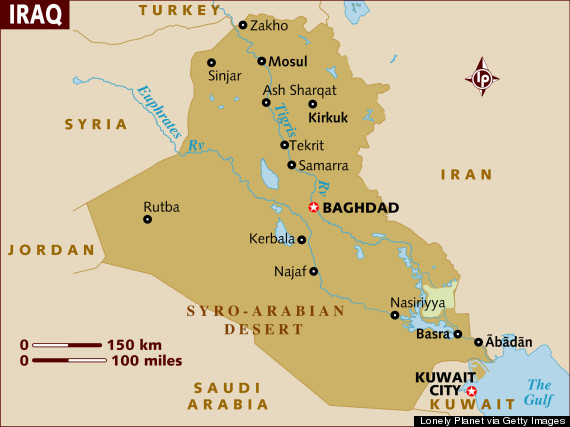 The recently seized city of Mosul lies in northern Iraq, and there are reports that ISIS is also moving south towards Kirkuk.

After the intial break with al-Qaeda's central authority, which was eventually formalized in January of this year, ISIS quickly accumulated power. As Liz Sly reports in her excellent profile of the group for the Washington Post, the group's rapid rise was in no small part due to their ability to recruit thousands of militant volunteers who had flocked to Syria in recent months.

Sly also notes that the ascendant ISIS began to hold a unique position within Syria, establishing itself not only as a group that fought against government forces but one that established control over its seized territory. In the areas under its control, ISIS carried out a number of atrocities, imposing radical Islamic laws and sometimes sharing the evidence of their brutalizing on social media.

Reportedly commanding thousands of fighters and freed of al-Qaeda's bureaucracy, ISIS has seemingly set its sights on controlling cities in Iraq. In January of this year the group's militants assaulted the city of Fallujah and seized its government buildings. Despite a government offensive to retake that city, ISIS remains essentially in control.

Now the fighters have seized Mosul in a massive assault that has already caused over hundreds of thousands to flee their homes, and will likely result in more insecurity for a country that saw over 800 killed in May alone.

On Wednesday, the fighters pressed south towards the capital Baghdad and closed in on Iraq's largest oil refinery near the city of Baji. The inability of Iraq's government to halt ISIS' gains is of serious concern for the future of the country, raising fears that this is part of a grander ambition by the terror group. As the Washington Post reports, it's a sentiment expressed by Iraqi governor Atheel Nujaifi, who stated in the wake of the attack that “this will reach every corner of Iraq if it doesn’t stop.”

A video posted to the YouTube channel of an alleged ISIS fighter, showing the aftermath of the Mosul assault.