The terrorist attacks on Paris, a nerve centre of European culture, was a déjà vu moment. Nearly 15 years ago, 9/11 had evoked similar sentiments: shock, disbelief and confusion. Much has happened since that fateful day. The West and its allies, including my country Pakistan, have been waging a "war against terror". The chief threat then - al-Qaeda - stands relatively weakened, though it still exists as a dispersed entity in many guises. Its new and more lethal transmutation, Daesh, or the "Islamic State in Iraq and Syria" (ISIS), has risen in the Middle East. Unlike al-Qaeda, the ISIS occupies territory with nearly 8 million levy-paying subjects and oil, and retains the unchanged, maybe more intensified, ideology. This ideology uses regressive interpretations of Islamic scriptures to rekindle an Islamic caliphate and defeat the West. Worse, ISIS is overtly supported by some Muslim countries; and covertly by the West in its bid to oust Syrian ruler Bashar al-Assad.

Since 9/11, the West invaded Afghanistan and Iraq, aided the tumult in Libya, got excited by the Arab Spring but watched the elected, neo-Islamist Mohamed Morsi government ousted in a coup. All through these years, the Western nations have retained opportune alliances with Islamist monarchies of the Gulf. Among the latter, Saudi Arabia is the ideological fountainhead of the Salafi and Wahabi doctrines that shape Islamist extremism and provide faux-religious narrative to the jihadis - from al Qaeda to ISIS, and from Taliban to Boko Haram.

During this era, while the US and Europe remained relatively secure, save a few terrorist acts, Islamist extremists wreaked havoc in Muslim countries. Iraq, Pakistan, Afghanistan among others have bore the brunt of their brutalities.

Turkey is now feeling the heat for its myopic policies towards the Kurds and Syria. Thousands have also died at the hands of terrorists in Nigeria (see table below from here): 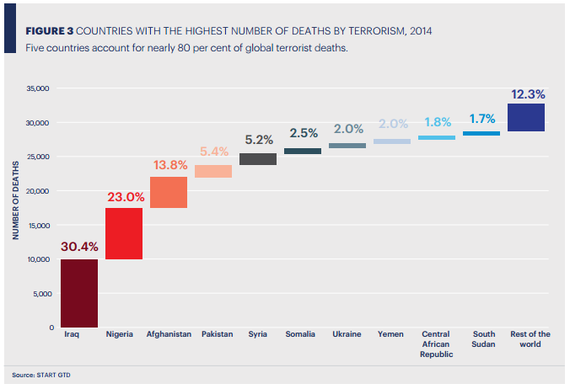 It is now widely accepted that the 2003 Iraq war had unintended and disastrous consequences. Shia-majority Iran emerged as the net beneficiary of a changed regional order, and its influence now stretches from Iraq to the Palestinian territories.

The Sunni arc, the other grouping within the Muslim world, has been desperate to minimize these gains by Iran. In pursuit of this, Sunni militants in Iraq, and later Syria were armed and aided by a Saudi-led alliance with express Western endorsement. Consequently, in the past two years, 250,000 Syrians have died and at least nine million displaced. In Iraq, conservative estimates suggest that nearly half-a-million people died in the decade-long conflict. With the disappearance of the state in many parts of Iraq, and the withering writ of Assad in Syria, ISIS could not be asking for a more ideal ground to base its ragtag state.

The impact of these developments, unfortunately, strengthened the Muslim grievance narrative. Today's Iraq and Syria provide ample evidence for the extremists to peddle their anti-Western ideology. The chaos and destruction are used to lure young men and women to join a global jihad. There are 30,000 or so foreign fighters supporting ISIS. Most of these fighters are from the Middle East and a slender segment is from Europe. The largest number - around 700 - of the European jihadis is from France. 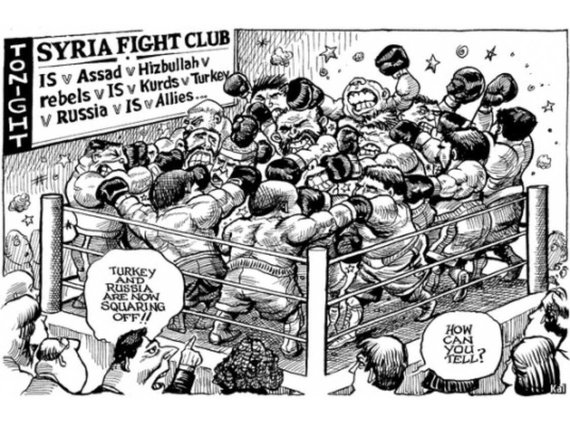 All Paris attackers identified so far held European Union (EU) nationalities. Reportedly, the mastermind of the Paris attacks, according to French officials, was the 27-year-old Abdelhamid Abaaoud. A Belgian of Moroccan origin, Abaaoud travelled to Syria to join the ISIS in 2014 and was disowned by his family.

The Paris attacks, therefore, must be viewed amid the turbulence that grips the Middle East and the ideological fault lines that provide a perverse legitimacy to violence. France is home to around five million Muslims, arguably the largest Muslim community in Europe. Most are of North African descent, nearly half below the age of 24. They are maladjusted and marginalised as attempts at forced assimilation has not been successful. Most of the French Muslims live in the poorer banlieues around cities, and are also overrepresented in French prisons. 70% of French prison population is Muslim. Their tense relationship with the French state and society is rooted in colonial past and the bitter memories of the Algerian war of independence of the 1950s.

Since the brutal murder of the staff of French satirical magazine Charlie Hebdo earlier this year, France has been locked in an internal debate on how to tackle growing extremism amongst its Muslims. Post-Paris attacks, French leaders have made public their intent to take "exceptional measures" to win this war. President Francois Hollande remarked that this act of war was "prepared, organised and planned from outside with inside accomplices". France has already intensified internal security measures, after declaring that the response to the Paris mayhem will be "ruthless".

The ISIS attacks exploit the emergent wave of Islamophobia in Europe and elsewhere. Its cunning strategy is to breed more hostility towards European Muslims. Chaos is what it seeks. Massive crackdown on Muslims with increased surveillance can breed more disaffection. Already, the results are evident: while France has vowed to take in refugees, Europe's right-wing is gearing up to close doors and in the US - the self-defined land of immigrants - Republican politicians are whipping xenophobia.

Western Europe today faces a dilemma: how to isolate extremists amongst their large Muslim populations, and also ensure that the rest continue to remain a part of the larger society. The prevalent policy has been to encourage multiculturalism in Western Europe for assimilation of Muslim immigrants and their progeny.

The post-Paris refugee aversion in the West is actually a smokescreen for two, intertwined issues: uneven integration of Muslim communities and the worn out jurisprudential/religious rhetoric that afflicts the Muslim mind.

Europe's colonial past gets compounded by the regressive interpretations of Islam, which keep segregation intact and alive. The appeal of the ISIS to the hundreds who left Europe is, in part, rooted in a complex experience of alienation. Disengaged from larger societies, Islamism can provide a sense of identity, albeit simplistic, of belonging to an abstract collective of Muslims "persecuted" by the West. It is within such a worldview that horrific acts of violence are also perpetrated and justified.

Current models of multiculturalism and assimilation require an urgent review, as do policy and state behaviour in Europe - especially France. At the same time, Muslim communities have to find ways of effectively tackling the widely reported youth radicalisation. Many non-practising but disillusioned Western Muslims were lured online by utopian solutions provided by groups like the ISIS, and the internet is undoubtedly a huge space to regulate. 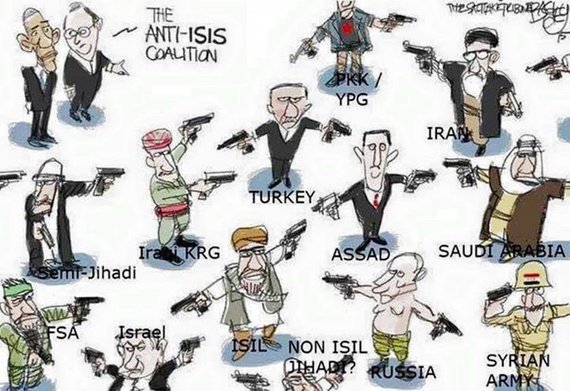 Despite the year-long bombings of ISIS positions by US forces, the terrorist group remains financially sound and, given how cost-effective terrorism is, its resilience was demonstrated brutally in Paris. Airstrikes on the ISIS and curtailing its funds are simply not enough to guarantee a long-term solution. The militaristic "solution" in the recent past has, largely, backfired. Russia's recent military campaign to save Assad targets both rebels and the ISIS but faces uncertainty. In fact, the recent crash of a Russian airliner was claimed as an ISIS retaliation. Given the competing interests of various actors in Syria, it is unlikely that Western allies can achieve any measure of success without the support of Russia and Iran.

If the West is serious, it has to work towards a negotiated settlement in Syria. The most viable option is not to let the Syrian state further fritter away, even if it means short-term acceptance of the increasingly irrelevant Assad regime. The fantasy of regime change needs to be shelved for now; and despite the immediate challenge of engaging Russia, a multilateral approach needs to be adopted. Otherwise, as the current Russia-Turkey tensions show, competing interests will undermine the larger objective of defeating the ISIS. 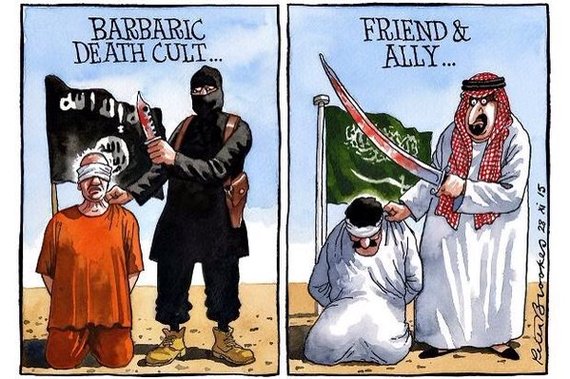 (Peter Brookes cartoon for The Times of London) Nothing should delay the revision of "jihadi" narratives that are often enabled by certain Muslim states allied to Western countries. The US and Europe will have to reconfigure their relationships with Saudi Arabia and other Gulf monarchies to end the petro-dollar-backed Wahabi-Salafi networks worldwide. This is where the long-term interests of the vast majority of Muslims and the West may converge.

Another version of this post was published by Daily O as an op-ed.