When it comes to the Islamic State, the extremist group that has seized large swaths of Iraq and Syria using horrifying tactics, there is no shortage of speculation about its history and ambitions. But not all the claims about the organization now targeted by the U.S. hold up. Here's a look at some of the biggest and most troubling misunderstandings about the Islamic State.

ISIS is not al-Qaeda. In fact, the groups are on less-than-friendly terms. Here’s the backstory:

ISIS' roots lie in a Sunni Islamist militant group founded by Abu Musab al-Zarqawi, who pledged allegiance to Osama bin Laden in 2005 and named his group al-Qaeda in Iraq. Their relationship was sometimes tense, and the groups developed different tactics, goals and styles of leadership.

After al-Zarqawi was killed in a U.S. strike in 2006, the group took the new name the Islamic State in Iraq. The group's current leader, Abu Bakr al-Baghdadi, decided to expand into Syria after the country's civil war broke out in 2011. In April 2013, al-Baghdadi proclaimed his group’s merger with al-Qaeda’s branch in Syria, the Nusra Front, calling the new venture the Islamic State in Iraq and Syria, or ISIS. But the al-Qaeda group denied the alliance, and when al-Baghdadi refused orders to focus on Iraq, al-Qaeda’s top leadership cut ties with ISIS. Since then, the two can be thought of as competitors. 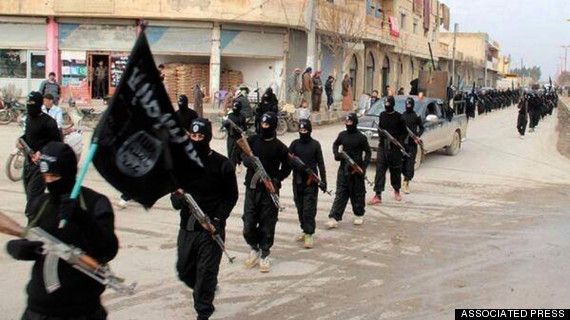 MYTH 2: ISIS WAS CREATED BY THE CIA

One of the more eyebrow-raising theories about ISIS is that it is a creation of U.S., British and/or Israeli intelligence agencies. New York Times reporter Thomas Erdbrink told HuffPost Live that the belief is common among Iranians. The theory was traced back to a dubious blog post that was picked up by Iranian and other Middle Eastern media. Conservative media got hold of it, using it as an example of a government conspiracy. Politifact bestowed the theory its "Pants on fire" rating. 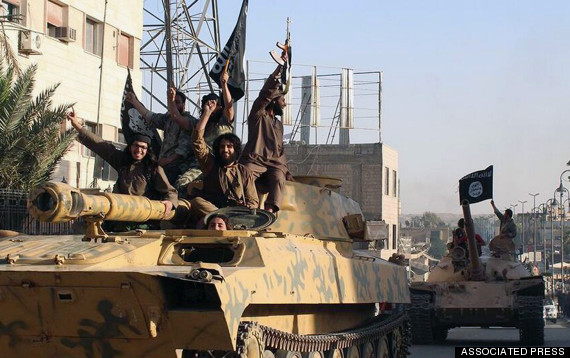 As Alastair Crooke explains in a blog for the WorldPost, ISIS practices an ultra-radical interpretation of Sunni Islam.

In late September, a group of Muslim scholars from around the world issued a letter rebuking ISIS’ extreme ideology. The scholars tore down the group’s practices as un-Islamic, offering a point-by-point summary of how its ideology breaks from what most Muslims believe. The scholars wrote that in Islam, it is forbiden to torture, kill the innocent and attribute evil acts to God, rejecting how ISIS has sought to kill people they call “kafir” -- or infidels who have not pledged allegiance to a single Muslim leader. For ISIS, the kafir may include other Muslims. The scholars go on to denounce other ISIS actions and beliefs, including forcing others to convert to its ideologies, destroying the tombs of prophets.

Muslims around the world have condemned ISIS’ extreme beliefs. A movement started by British Muslims flooded social media with messages of “#NotInMyName,” rejecting ISIS’ brutal tactics and accusing the group of “hiding behind a false Islam.”

MYTH 4: ISIS HAS NO OBJECTIVE

Despite ISIS' craven tactics and irrational aims, the group is not acting without motives and strategies. Its goal is to establish a caliphate -- an Islamic state obedient to its leader, Abu Bakr al-Baghdadi.

It has worked to this end by waging jihad in a fashion that captivates attention, exploits fears, woos disaffected communities, takes advantage of weaknesses in the region, spreads its message, enlists new recruits, and adds wealth and resources. If ISIS is mad, it is mad like a fox.

ISIS reveals the map of its intended state. So far, it includes, #Iraq, #Syria, #Jordan, #Israel, and #Kuwait. pic.twitter.com/Hx9NvXNIA4

MYTH 5: ISIS IS POISED TO INFILTRATE THE U.S. VIA MEXICO

Politicians, including Texas Gov. Rick Perry (R), Rep. Lou Barletta (R-Pa.), Sen. Marco Rubio (R-Fla.), and Rep. Trent Franks (R-Ariz.), and media reports have claimed recently that the U.S.-Mexico border could, and potentially already has, been used as a U.S. entry point for ISIS forces. However, the allegations aren’t holding up. Franks’ claim that ISIS is presently in Mexico is highly unlikely, according to fact-checker Politifact. Top security officials said the U.S. has no evidence ISIS agents are crossing the U.S. border with Mexico, and there was no indication that it intends to do so. The Mexican government called the idea "absurd."

Despite ISIS victories in Iraq and Syria, and the ineptitude of the Iraqi military to stop its advance, analysts argue it is not unstoppable.

Daveed Gartenstein-Ross, a scholar and senior fellow at the Foundation for Defense of Democracies, argued that ISIS' "strategy is a mess," because it has has surrounded itself with enemies. Gartenstein-Ross and William McCants, a scholar of militant Islamism, both have noted that in declaring the Islamic State caliphate, ISIS has hinged its credibility on an unsustainable idea.

Vox's Zach Beauchamp wrote that there are geographic and demographic limits that will keep ISIS from becoming an unstoppable force.

In addition, the group's brutal tactics could alienate allies and potential conscripts, and may prevent it from wider public support.

Daily Beast reporter Jacob Siegel said he sees signs of tension within the ranks of ISIS that could lead to the group's self-destruction.

And the U.S. and other opponents of ISIS believe the group can be contained to its former manifestation as a "rural insurgency," a strategy outlined by Michael Knights, a fellow at the Washington Institute for Near East Policy. 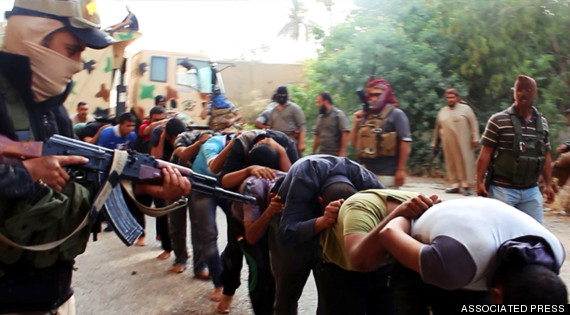 Wouldn't this be convenient if true? Obama has stressed that if ISIS were to establish a permanent foothold in the Middle East, American interests would be at risk.

First, ISIS has stated it aspires to extend its caliphate beyond Syria and Iraq.

In addition, there are hundreds of American troops in Iraq, and U.S.-linked oil companies are based in the northern Iraq region of Kurdistan.

A Middle East in the grips of ISIS may also become an incubator for attacks directed at targets outside of the region, noted Michael Singh of the Washington Institute for Near East Policy.

Through its command of social media and propaganda, ISIS has sought to inspire and recruit beyond the borders of Iraq and Syria. Analysts estimate there are thousands of Westerners among ISIS' ranks, including Americans. U.S. officials said they fear ISIS may launch attacks in the U.S. and other Western nations as it broadens targets. There also is concern that ISIS’ Western recruits may return to the U.S., an Obama administration official acknowledged.

Finally, ISIS has beheaded two American journalists, a British aid worker, Lebanese soldiers, and others in Iraq and Syria. ISIS is believed to be holding more Westerners and journalists hostage. A separate extremist group in Algeria beheaded a French hostage last week over France’s participation in the campaign against ISIS. 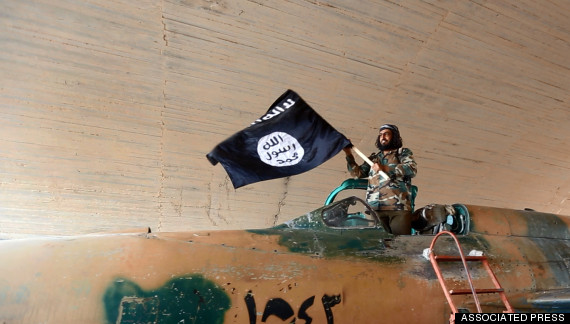 MYTH 8: THE RISE OF ISIS IS OBAMA'S FAULT

The "blame Obama" argument focuses on the withdrawal of U.S. troops from Iraq in 2011, and the American president’s hesitancy to intervene in the Syrian civil war.

Critics argue that if the U.S. had kept a larger military presence in Iraq, ISIS would not have been able to rebound after incurring heavy losses in 2006.

The argument that President Barack Obama blew it by not supporting moderate rebel forces in Syria earlier in the civil war was recently fueled by Hillary Clinton, the former secretary of state and likely 2016 presidential candidate, in an interview with The Atlantic's Jeffrey Goldberg. Clinton told Goldberg, "The failure to help build up a credible fighting force of the people who were the originators of the protests against Assad -- there were Islamists, there were secularists, there was everything in the middle -- the failure to do that left a big vacuum, which the jihadists have now filled."

Yet the rise of ISIS is a product of many factors. Focusing only on the presence of U.S. forces in Iraq or Obama's hesitancy to intervene in Syria fails to acknowledge other important developments that affected ISIS and the world's failure to contain it, including:

-- Despite its size and strength, the Iraqi military's fight against ISIS was plagued by missteps.

-- Maliki's government in Iraq kicked the country's Sunnis to the curb. ISIS seized on the Sunnis' great discontent, and took up a sectarian war against the Shia.

-- Some experts are skeptical that deeper U.S. involvement in the Syrian civil war would have prevented the rise of ISIS. They say the nature of the battles in Syria and the ragtag composition of the rebel forces likely would have limited the extent that U.S. assistance would have made a dent in the growth of ISIS. 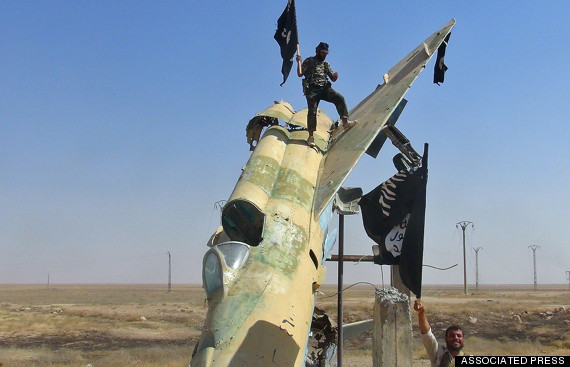 Undated image posted in August 2014 by a Syrian opposition group shows ISIS fighters waving the group's flag from a damaged display of a government fighter jet following the battle for the Tabqa air base, in Raqqa, Syria. (AP Photo/ Raqqa Media Center of the Islamic State group)

Another wild claim bouncing around the Internet links ISIS and Sen. John McCain (R-Ariz.), a vocal proponent of escalating the U.S. response to the militants. It started with a photo McCain posted online of a meeting with Free Syrian Army fighters during a 2013 trip to Syria. The photo was later inaccurately framed as showing McCain meeting ISIS militants and posted on social media and conspiracy theory blogs. From there, speculation grew, suggesting McCain had a role in ISIS’ creation, and had a relationship with ISIS leader al-Baghdadi, with photoshopped images of McCain pinning a medal on the chest of the ISIS leader as evidence. Sen. Rand Paul (R-Ky.) propelled the McCain-ISIS conspiracy in an interview with The Daily Beast, saying, "Here’s the problem. He [Sen. John McCain] did meet with ISIS, and had his picture taken, and didn’t know it was happening at the time."

The theory has been thoroughly discredited. According to The Washington Post's fact-checker, "there is zero evidence that any of the men that McCain met with in Syria are linked to the Islamic State." The rebels who were portrayed as ISIS fighters were, in fact, members of the Free Syrian Army, who oppose both ISIS and Syrian President Assad.

More from the WorldPost on the Islamic State:

The 9 Biggest Myths About ISIS Debunked
Crisis In Iraq

1 / 37
Shiite Iraqi volunteers, with the Ashura Brigade, take part in a military training in the shrine city of Najaf, in central Iraq, on June 22, 2014. (HAIDAR HAMDANI/AFP/Getty Images)
Getty Images