ERBIL, Iraq ― Plumes of noxious smoke are wafting through parts of northern Iraq, after militants from the self-described Islamic State set ablaze part of al-Mishraq sulfur plant in their retreat.

At least two civilians died from exposure to sulfur dioxide released by the fire, south of Mosul, according to Ahmed Younis, a 29-year-old medical assistant in nearby Qayyarah. More than 100 people sought medical attention over the incident on Friday, Younis added.

American and Iraqi officials voiced concern last week over the hardliners using chemical weapons during the battle for Mosul, Iraqi’s second largest city. The U.S.-backed, Iraqi-led operation ― the largest such operation since 2003 ― could see ISIS driven out of their last main stronghold in Iraq. The battle could take months, U.S. military officials estimate.

Iraqi forces drove ISIS fighters out of the area on Friday, but the militants are destroying as much as possible on their retreat, as part of a brutal scorched earth campaign. The group routinely detonates explosives, rigs booby traps and sets alight oil wells, buildings and farmland as it withdraws from areas.

“There was a big cloud [of smoke] even in Qayyarah,” 30-year-old Hossam, a civilian living in the nearby town of Qayyarah, told The WorldPost late Friday. “We couldn’t breathe well.”

U.S. troops based at Qayyarah Airfield West, next to the town of Qayyarah roughly 18 miles from Mishraq, are wearing gas masks at their own discretion, according to a U.S. military source there reached by phone.

The U.S.-led coalition has targeted key Islamic State chemical weapons sites over the past year in an attempt to curb their chemical capabilities. The United States military and other coalition countries have trained partner forces in the event of such attacks, though Kurdish Peshmerga fighters have said that they don’t have enough gas masks.

ISIS still has only rudimentary chemical weapons capabilities, despite recent casualties in places like Taza, just south of Kirkuk, where some civilians are still physically and emotionally scarred from a mustard attack in March, military and chemical experts say.

Such weapons pose a “dreaded risk,” Gregory Koblentz, associate professor and director of the Biodefense Graduate Program at George Mason University, told The WorldPost last week. It’s a “risk that people instinctively react to with a high degree of fear and panic because it is invisible, insidious, and indiscriminate.”

“Even if they only kill a few, they will terrify large numbers,” he added.

Chemical experts have reportedly been dispatched to Mishraq sulfur plant and firefighters were still trying to contain the blaze as of Saturday afternoon. It could be days until the fire is under control.

Civilians in Qayyarah are covering their mouths and noses with wet cloths and trying to seal their homes, according to locals. They were already reeling from smoke billowing out of oil wells, that ISIS set alight when Iraqi forces drove them out of the town that’s some 18 miles south of Mosul in late August.

Civilians are reportedly trying to leave Qayyarah, but they are facing roadblocks from security forces there who won’t let them pass.

One resident of Qayyarah, populated mainly by Sunni Arabs, complained that civilians are barred from leaving, despite the potentially toxic fumes, due to widespread security concerns over possible ISIS sympathizers and collaborators leaving the town to launch attacks elsewhere.

“The people are trying to leave, but the Kurdish Peshmerga and Iraqi forces won’t let them leave unless they have a sponsor in the KRG,” he said angrily, referring to Iraq’s semiautonomous Kurdish area. 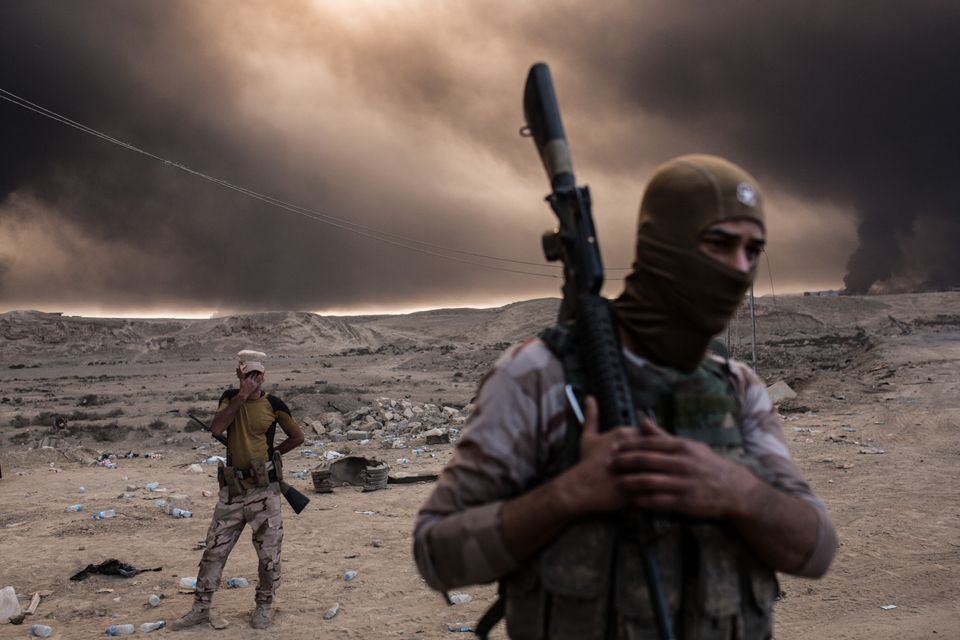