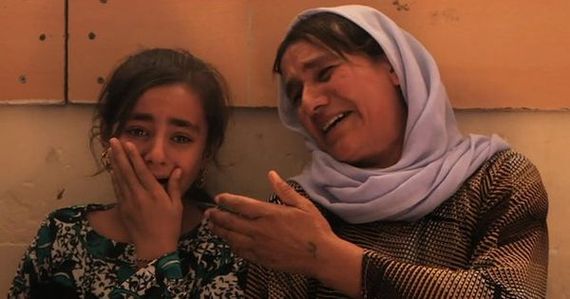 ISIS has been generating millions of dollars through the sale of women and children abducted from the regions it has conquered. While the Yazidi slave trade is well publicized in the West, we also chillingly learned through our ISIS Defectors Interview Project, that ISIS has not only enslaved Yazidi women (who they claim as devil worshippers), but also women who were the wives and daughters of its so-called enemies--most of them Sunni Muslims. Enslaving Sunni women directly contradicts their own fatwa on who can be enslaved, but ISIS is not known for being internally consistent in any case. One of our Syrian informants, a former guard and now defector, recently went into great detail about his work guarding hundreds of Yazidi and Sunni women doomed for systematic rape. Our forthcoming book (ISIS Defectors: Inside Stories of Confronting the Caliphate, Advances Press, 2016) provides a more detailed account of those interviews.

This week news broke in Turkey about a legal case resulting from Northern German Broadcasting (NDB) and Southwest Broadcasting (SWR) reporting last November that ISIS slave trade and brokers have been operating in Turkey adding huge sums of money to the ISIS coffers. Last November, the German news outlets managed to film this illicit slave trade as it was secretly operating in Gaziantep, Turkey as well as make interviews with abducted women's families and the middlemen in Turkey who helped broker the release of some of these women.

Gaziantep is a Turkish city of two million people in southern Turkey near the border with Syria having as its neighbors the Turkish cities of Sanliurfa and Kilis--cities where many ISIS members are have been very active in support in recent years for their terrorist activities. Some ISIS members have even referenced Sanliurfa (Urfa) as a place for rest and relaxation when they chose to take a break from fighting in Syria and Iraq.

The German reporting featured the case of Hoda Alias and her three children who were abducted and enslaved during the Sinjar massacre of ISIS and were released in November 2015 through money paid to ISIS, via a middleman in Gaziantep. Hoda served over a year as a slave to ISIS fighters, after which she with her three children, was put up for sale on an ISIS internet page with reference to her as "slave number twelve". Below is the picture of them featured on that web page. Her sale price was advertised on the webpage as eighteen thousand dollars. According to the NDR and the SWR , many Yazidi women were similarly sold through the Internet. (Picture credit to http://www.hurriyet.com.tr/16-gunde-beraat-40089919)

The middleman in this case, goes by the Arabic kunya of Abu Mital and is from Iraq. He brokers trades for Yazidi families to buy their relatives back from the hands of the ISIS. While he manages to rescue the enslaved family members, the money he collects directly supports and goes into the coffers of ISIS. In the German news video , he claims that he directly negotiates with ISIS via online chat rooms and WhatsApp.

In this case, to broker Hoda's and her children's release, Abu Mital was told by ISIS to go to Gaziantep so that he could purchase them. According to the German reporting, captured via a hidden video camera, Abu Mital met with ISIS brokers in Gaziantep and handed over money to them. The building they entered looks like a regular office building from the outside. Inside, the ISIS slave dealers used cash counting machines to make sure the amount is correct. After the payment is received, the ISIS slave dealer called another in his network to arrange transfer of the money to ISIS. All this was carried out secretly in Gaziantep in Fall of 2015 without any interruptions (translated from the Turkish subtitle in this video.) (The original footage can be seen here.)

In this case, Hoda--the enslaved woman, with her children aged two, four and eleven--were purchased and brokered by Abu Mital to hand them over to their family. The negotiation price for the woman was twenty thousand U.S. dollars and fifteen thousand dollars for the eleven-year-old boy. After the payment was made and carefully counted, release of Hoda (identified as number twelve slave) with her three children was arranged with Abu Mital being told that someone would call him for their delivery. When the family met with their relatives, the sad story did not end there. Hoda and her children learned that her husband, and their father, had been slaughtered by ISIS.
Although directly contributing to the financing of one of the most heinous terrorist groups in history and brokering for ISIS slaves, Abu Mital attempted to portray himself in a positive light--as the savior of Yazidi women, claiming he has managed to save over two hundred fifty Yazidi women from the hands of ISIS alone, paying over two and a half million dollars directly to the terrorist organization He also adds that he identifies the women through a special ISIS webpage, where the women are labeled by numbers and where their families could recognize their loved ones and arrange their purchase back from the brutal grip of ISIS.

ISIS is also known to have released an order in Iraq, which was found on an Emir who was killed there. The order for the sale of slaves bore the stamp of the terrorist organization and was dated October 16, 2014. Pictured below, it describes and regulates the sale of enslaved women, including the prices of a variety of ages. The prices of women and girl slaves are arranged and grouped as from ages one to nine, ten to twenty, twenty to thirty, thirty to four and forty to fifty. This document also specifies that slaves who do not accept being sold are ordered to be killed. This echoes our ISIS Defectors Interviews Project data in which we also were told the sex slaves had their children taken from them--including breastfeeding babies--and were faced with execution unless they succumbed to becoming the objects of systematic rape.

After the German video aired on the German TV channels on Nov 30, 2015, the Gaziantep Bar Association made a complaint to the Turkish justice system though the Gaziantep Prosecutor's Office. After the complaint, the Turkish National Police raided the office featured in the news video. During the raid, the police confiscated over three hundred seventy thousand dollars, many foreign passports, and around two thousand pages of cash receipts indicating various cash transfers between Turkey and Syria. Among the documents, the following receipts:

Six suspects were arrested and charged with being members of a terrorist organization, financing a terrorist organization, and human trafficking. The first trial was held on December 31, 2015. The suspects denied the allegations and claimed that they were basically transferring regular Syrian people's money to Syria via a fixed commission, as the banking system is currently collapsed in Syria.

The second trial was held January 15, 2016. Based on the verdict of the court, all the suspects were released due to inefficient evidence. However, the above receipts were translated into Turkish and handed over to the court on January 27, 2016, clearly indicating that on several occasions large sums of money was transferred routinely and no one had bothered to wait for the translations of the receipts to arrive to the court before the final verdict. 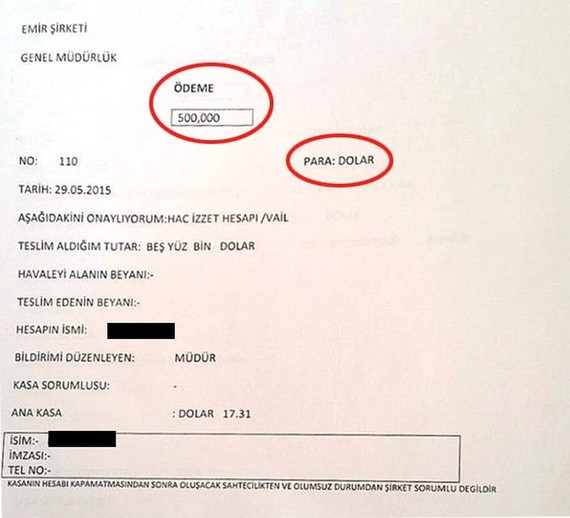 The slave-brokering trade between ISIS in Syria and Turkish middlemen was carried out in a very simple manner. ISIS numbers the slaves it would like to sell with pictures attached and places their information on a hidden website. If a slave has children, the pictures of the slave with her children, as in Hoda's case, were also attached to this special and somewhat hidden webpage. Underneath the pictures, the prices are listed. After the buyers agree with the brokers for ISIS on the purchase price, cash is handed to the office in Gaziantep, as was video recorded by the German TV stations. The transaction is confirmed first by counting the money carefully, then having the money transferred to ISIS, and followed by transfer and release of the slaves inside Turkey.

The Gaziantep Bar Association after learning of the release of the suspects and the closure of the case without charges being applied has now decided to take the case to the appellate court in Ankara. News of slave brokering happening inside Turkey was a shock to the Turkish public as was the verdict in the case decided in only sixteen days and in favor of the brokers, in comparison to many other Turkish criminal cases that went on for several years. This news was reported in Turkish newspapers as of April 17, 2016.

Ahmet S. Yayla, Ph.D. is a tenured Professor and the Chair of the Sociology Department at Harran University in Turkey and serves as Deputy Director of the International Center for the Study of Violent Extremism (ICSVE). He previously served as Chief of Counter-Terrorism and Operations Division in the Turkish National Police. His research focuses on terrorism, radicalization and countering violent extremism (CVE). He has also served as an advisor to the United States Department of Homeland Security (December 2005 to April 2006) on issues of terrorism and interacting with Muslim communities in the United States. Dr. Yayla was invited in 2005 to testify to the U.S. Senate Homeland Security Committee as an expert witness. During his career Dr. Yayla has interviewed thousands of terrorist cadres representing over twenty different terrorist organizations. The ISIS defectors interviews of late are unique in the world as he was one of the first researchers (with Dr. Anne Speckhard) who managed to reach ISIS defectors hiding in Turkey and to persuade them to talk openly on video about their stories. The results of this research are forthcoming in academic articles, film and the book entitled, ISIS Defectors: Inside Stories of Confronting the Caliphate (Advances Press, 2016).

Anne Speckhard, Ph.D. is Adjunct Associate Professor of Psychiatry at Georgetown University in the School of Medicine and is Director of the International Center for the Study of Violent Extremism (ICSVE) and is a nonresident Fellow of Trends. She is also the author of Talking to Terrorists and coauthor of Undercover Jihadi. Her newly released book, inspired by the true story of an American girl seduced over the Internet into ISIS, is Bride of ISIS. Dr. Speckhard has interviewed nearly five hundred terrorists, their family members and supporters in various parts of the world including Gaza, the West Bank, Chechnya, Iraq, Jordan and many countries in Europe. She was responsible for designing the psychological and Islamic challenge aspects of the Detainee Rehabilitation Program in Iraq to be applied to twenty thousand detainees and eight hundred juveniles. She is currently running the ISIS Defectors Interview Project with Dr. Ahmet Yayla at ICSVE. Personal website: www.AnneSpeckhard.com

References:
https://www.academia.edu/19919031/Deadly_Interactions_ISIS_IS_Turkey_and_Syria
Greenaway, N., & Macfarlan, T. (June 4, 2015). 'You have to forget everybody - even your mother and father ': Journalist who went undercover as a jihadi bride describes how ISIS commander tried to lure her to Syria. Daily Mail. Retrieved from http://www.dailymail.co.uk/femail/article-3110895/Journalist-went-undercover-jihadi-bride.html
https://youtu.be/sUmTLCOVugI
https://youtu.be/sUmTLCOVugI
http://www.msn.com/tr-tr/video/populer/i%C5%9Fidin-gaziantepte-yapt%C4%B1%C4%9F%C4%B1-k%C3%B6le-sat%C4%B1%C5%9F%C4%B1-kamerada/vi-AAfVFgA
http://www.milliyet.com.tr/isid-in-kole-pazarinda-turklere-gundem-1993494/
http://m.ozgurdusunce.com/haber/turkiye-yi-ayaga-kaldiran-18226/)
http://m.ozgurdusunce.com/haber/turkiye-yi-ayaga-kaldiran-18226/
http://www.hurriyet.com.tr/16-gunde-beraat-40089919