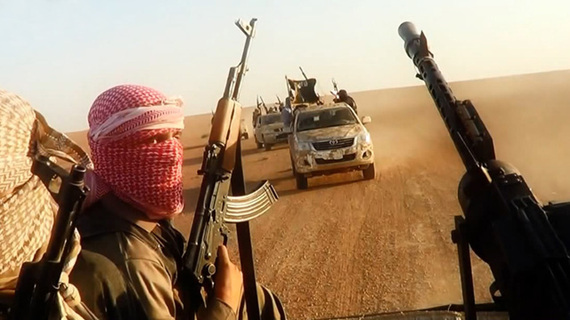 After watching the President outline his Agenda for ISIS in the Middle East, I caught myself thinking, "This just seems like the same drum beat of war we heard in 2002." Of course our country hasn't been attacked like it was on 9/11, but the players haven't really changed that much. Our enemies are still abroad. Our answer is still to bomb and wage violence. But is this really the best we can do?

I believe we have to begin to ask ourselves, do we want to continue on for the next decade caught in another war in the Middle East? Maybe we can begin outlining strategies to help change what seems to be the course of the future.

1. Partners Who Focus on the Future

The history of the West is plagued with the black eye of colonialism, and here in America we have a view of ourselves that we can solve anything! "It can't be that hard," can be heard in every board room across the region. But if we're honest with ourselves, we look at the Middle East as an extremely complicated scenario. With 1600 years of history at their backs, and the largest transfer of wealth in the world over the last four decades; the complications pile up to seem impossible.

What if there were willing partners both in the West and the Middle East who were willing to look beyond the present and begin to predict the future. Instead of living in a world with growing extremism, maybe there's a way we can find like-minded, youth-loving, future builders who would come together around the table to encourage the next generation.

Partners would be just that... partners. The only agenda at the table would be to focus on the health and the virility of the next generation to build a vibrant economy, a sustainable social structure, and a motivation to make their region a competitive place to live and work in the world.

No longer can we ignore the facts that faith plays a central part in this discussion. The West seems to want to sterilize all conversations around the world of faith and reduce the dialogue to "Human Need."

We forget, the faith component around the world creates a View of the World by which people base their whole lives on. They pray at the same Mosque or Church where their parents prayed. The values and morals adopted at a young age are largely continued on into adulthood. The way people do business, socialize with others, or take personal interest in the agenda of their community is often focused on faith values.

With a large table for faith leaders interested in common values at the table of the future, we may be able to address some of the problems in and around the communities affected by the people who wish it harm.

The youth of today will be the leaders of tomorrow. Recently I asked a group of leaders in Washington D.C. "Who is actually focused on the 10-year strategy to help the Middle East." The answer was a resounding "NONE."

No one in the current leadership structure is actually looking at the affect of the war in Syria, Gaza, or Iraq as a consequential generational fashioning event. It seems like we are much to quick to solve our immediate problems without any thought for the future.

At our youth center in Colorado, we've started introducing Middle East Teenagers with American Teenagers. They bike together, hike together, ski together, and learn how THE OTHER thinks. We explore different ideas, cultures and faith premise without condemnation. We applaud everyone as human, and do our best to facilitate friendships.

Each time another group leaves I wonder, "Why can't the world be like that?"

It's hard to think about violence toward another when you develop deep meaningful friendships.
It's impossible to think of someone else when you understand their grievances and try to solve those grievances through a posture of hospitality.

One large news organization called our project, "Jet-Ski Diplomacy" as they sat out on our water sports program and watched a Muslim ride a Jet-Ski alongside a Christian. "They were just typical teenagers having fun with no ideological agenda." she said.

Today's young people are tired of war.
They're tired of seeing the power struggle dictate their fear.
They are the first generation of Global Citizens who have the opportunities and the technology to reach out and truly have friends across the world.
They want to know people from far away lands, and they are open to ideas of togetherness and friendship instead of enemy against enemy, But someone has to lead them.

The youth of both regions are the hope for the future, but in the hallways of the policy making center of the world, silence for the youth of tomorrow reigns.

We may have to enter another conflict to stop the violence in the short term, but WHO out there is promoting value systems for the next generation? If we don't start thinking long term, we'll wind up right back here in another decade spending billions of dollars to stop a violent regime, see hundreds of thousands of people helpless at the arm of a dictator, and many innocent people try to survive the consequences of conflict.

Who will think about the future?