Every week, The WorldPost asks an expert to shed light on a topic driving headlines around the world. Today, we turn to Syria and the danger of the Islamic State militant group.

After the Islamic State captured a major military air base in Syria last week, the extremist group was quick to broadcast its war booty, posing in Syrian fighter jets and posting images of the air squadrons and missiles it claimed to have secured.

Yet how do we verify the militant group's claims about the types of arms it now has in its possession? Damien Spleeters, an associate field investigator at Conflict Armament Research, which tracks illegal weapons in conflict zones, is currently analyzing weapons evidence he collected during recent trips to Iraq and Syria.

Spleeters said the group's initial findings indicate that the Islamic State is alarmingly well-stocked with small weapons and ammunition, which he said "are going to kill the most people" in the long-run. 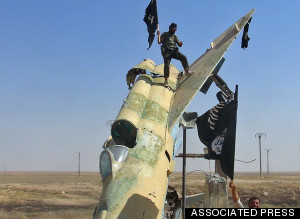 Islamic State fighters pose with a damaged Syrian government fighter jet after capturing Tabqa air base, in Raqqa, Syria, in this undated image released by the group's Raqqa Media Center and verified by AP.

What weapons does the Islamic State have?

Our information is dependent on what has been captured from the Islamic State by Kurdish fighters, so I can only talk about what we’ve seen. We saw a lot of small arms -- rifles, grenades, machine guns, truck-mounted machine guns, munitions.

The most important thing is munitions. Weapons can live for a long time, but in a protracted war like Syria and Iraq you have a constant need for ammunition. The Islamic State seems to have a flexible, logistical supply chain. It's not one line, but weapons made in different years and from different countries. All these different types suggest a lot of points of supply.

Where are they getting all of these weapons from?

There are several possibilities. One way is an Islamic State fighter buys ammunition on the civil market in his country and it is brought with fighters as they come. Or it's more organized -- the Islamic State may buy foreign weapons from a broker. We can't be positive about this.

In Syria, they have seized weapons from the government as well as other rebel groups. In Iraq, they seize military supplies from the army.

We also see stuff move between Iraq and Syria quite fast. We have seen American-made weapons that were captured in Iraq moved into Syria within a few days to a couple of weeks.

What weapons should we be most concerned about? Does the Islamic State have the ability to shoot down a plane?

I didn’t see any MANPADs (a type of surface-to-air missile system called Man Portable Air Defense Systems) but that is because they are not held at the front lines and I reviewed only weapons captured from the Islamic State in battle. I assume they have quite a few of these weapons because of all the bases they have captured. However, it is important to know if the weapons are operational -- for example, they will not work if the system is not complete or the battery is depleted. 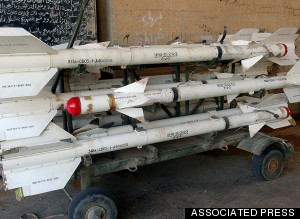 Munitions allegedly captured by the Islamic State in the battle for the Tabqa air base in Raqqa, Syria, shown in this undated image released by the group's Raqqa Media Center and verified by AP.

But just the threat of the Islamic State using these missiles is very worrying. Military aircraft are better equipped to evade such missiles, but civilian jets don’t have anything to defend themselves. Also, they can be transported quite easily, so you can go near an airport and wait to hit a civilian plane as it takes off. Already, a few airlines stopped their services to [the capital of Iraq's Kurdish region] Erbil. That is already a success for the Islamic State. They don’t even need to fire if they can stop air traffic.

I cannot authenticate the group's videos claiming they have larger military equipment. It would be very worrying if they start shelling civilian areas. However, their continued supply of ammunition and small arms, while less sexy, is more worrying in the long run. They are going to kill the most people.