Island. Oasis. Hallucination. Somewhere on the north coast of the Yucatan Peninsula, I have found my perfect recharge of sun and sand, and ceviche and margaritas. Isla Holbox, whose name translates to Black Hole, is a blue oasis. Quite possibly only 100 km from Cancun (in our case, it was 300 km as we decided to take the wrong road and then backtrack a few times), Holbox is a tiny island of whale watching, horseback riding, kayaking, nature walks, bungalows and quiet time. 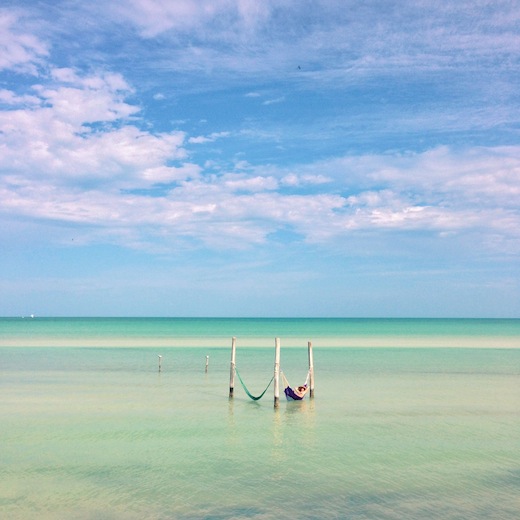 We were invited to Holbox for a long weekend to celebrate a friend's wedding with the only description of the unfamiliar island as "not Cancun," a place I deliberately ignore for its warranted Spring Breakers reputation. From the minute we drove into Chiquila, the last stop before Holbox, I knew this was my kind of place. Chiquila docks the ferries that transport to the island. And for me, ferries are the best way to gauge dimension and personality of a place -- whether large like the Grimaldi cruisers that run between Rome and Palermo or Venice's smallish vaporettos. In this case, small and relaxed. Within 30 minutes, we arrived on Holbox and taxied across the island on a golf cart, my second preferred method of travel.

Holbox is a conversation of colors -- from the vibrantly painted buildings in the small town to the beautiful blue waters -- there is color everywhere. What the small island of seven miles long and one mile wide does not have are cars, so its 1,600+ inhabitants and guests enjoy their days on foot, bicycle or golf cart. It is a 21st century Gilligan's island where relaxation is a day's event. Yes, there is whale watching, and other water sports, but to be honest, we didn't really do much sight seeing Holbox beyond a lazy horse trail and an afternoon wedding. And really nothing should be a priority when walking Holbox's coastline will suffice.

Though my stay was just a dip in the water, the cerulean blue immediately hooked me- slightly chilly, lovingly calm and deliciously salty. Had the water and the weather tipped the mercury upward a few degrees, I would have happily re-enacted Captain Jack Sparrow's hallucination sequence from At World's End.

How to Get There: Fly into Cancun, and drive west on Merida Libre highway, looking for indications to Chiquila, the port city where you will catch a 35-minute ferry to Isla Holbox. Ferry runs once an hour, depending on the season and costs 80 pesos. There are also short, private flights from Cancun, Playa del Carmen, Cozumel, et al.

Where to Stay: Isla Holbox has a selection of beachfront hotels and villas, as well as city apartments, none of which have more than two or three levels. We stayed in a beach bungalow at eco-chic Villas Flamingos, who eco-intentions include a very clever ecological bathroom system where shower water is recycled into the villas' small garden, along with compost-style WCs.