Say what you will about the recently exposed Bronx Terror Plot, but please, do not insult our intelligence (and your own) by weaving fantasy scenarios of how Islam is somehow to blame for criminalizing the terror suspects who were already career criminals long before their conversions -- and who displayed only a rudimentary understanding of Islam thereafter. 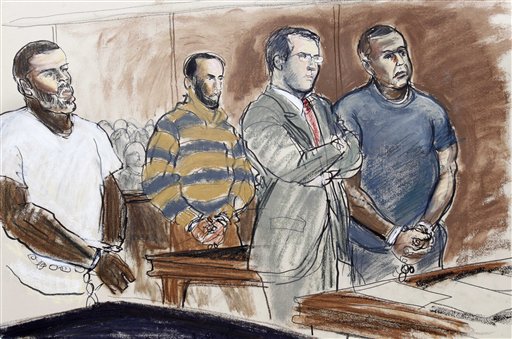 At first glance, media headlines gave the impression of a contiguous homegrown "Islamic" terrorist threat, a local outgrowth of the ominous global "Jihadi" network, secretly thriving in our midst but foiled by the FBI at the last minute. It had Islam written all over it, once again implicating American Muslims and spiking fears and suspicion that ours is a problem community, part of a foreign civilization ever at odds with the West, that wants to destroy the United States from within.

Many reports put the blame on Prison Islamic conversions despite the fact that most inmates who properly convert to Islam -- including African-Americans -- change for the better and emerge to lead crime-free lives. The usual excitable figures like NY Rep Peter King jumped on the case, warning that it "demonstrates the real threat from homegrown terrorists." Career Islamophobes like the people at the shadowy organization, the Clarion Fund (producers of the controversial hate films, Obsession, and The Third Jihad) were quick to pounce as well, declaring that the Bronx case was part of a "sophisticated" homegrown Jihad (their word, not mine).

But as more facts have begun to emerge, it turns out that the suspects, one of whom is a crack addict and the other with a history of mental illness, once again, are troubled oddballs operating well outside the mainstream of the American Muslim community and its institutions, with no ties and no support from Mosques, Imams, community leaders, members at large, or even real terrorist threats like Al-Qaeda. Once again, however, it turns out that the radicalization "tipping factor", if you will, was none other than a paid government agent-provocateur.

1. The suspects are petty career criminals with lengthy criminal records (one of them was arrested 27 times); most of their crimes were committed before they converted to Islam in jail. They had a history of violence, drugs, and other criminal activity and are said to be troubled men by family, friends, and neighbors.

2. The suspects appear to be gullible and naive -- hardly the breed of ruthless masterminds that the global terrorist networks like Al Qaeda tend to recruit and deploy. The New York Post called them "a bunch of terror dummies" while the AP describes them as "down-and-out ex-convicts living on the margins in a faded industrial city." Relatives describe them as "struggling" men. The uncle of one of the men, Onta Williams, describes his nephew as "weak and easy to manipulate." The sister of another one of the men, James Cromitie, called him "the stupidest man on the planet." The lawyer of a third man, Laguerre Payen, described his client as "intellectually challenged" stating that he had "a very low borderline IQ." Indeed, Payen, who was on medication for schizophrenia, was deemed too insane to be deported after a previous assault conviction.

3. The suspects appear to have a weak -- even perverse -- understanding of Islam. Salahuddin Muhammad, the Imam of the mosque that one of the men visited, publicly challenged him on his incorrect understanding of Islam stating that the man had "a fundamental lack of knowledge of Islam." The Imam stressed that the man struck him as strange but not violent and that none of the men were regular attendees. Neighbors said that the men routinely barbecued and boozed it up even though devout Muslims shun alcohol and pork. The FBI admits that the men acted alone with no support or knowledge from the mosque or the local Muslim community.

4. American Muslim groups, led by CAIR, strongly condemned the plot against area Synagogues and an Air Force base. Many Muslim activists -- including myself on the Alan Colmes radio show -- came out clearly delineating Islam's condemnation of terrorism and reaffirming Islam's respect for the sanctity of human life.

Radicalized by a Government Agent?

But members of the local Mosque, Masjid al-Ikhlas, said the FBI informant, identified by sources as Shahed Hussain, 52, had long been trying to recruit worshippers there for jihad.

"It's easy to influence someone with the dollar," said Imam Muhammed, a longtime member of the mosque. "Especially these guys coming out of prison."

Media reports reveal that the informant is a man who has had his own troubles with the law and had been coaxed into working as an informant in order to avoid deportation. He would drive up in his expensive car to the Mosque and offer community members free dinners, cash, or jobs to try to lure them into his fictional Pakistani terrorist connections.

Mosque members seemed to suspect that he was a possible agent-provocateur and were creeped out by his aberrant ways and views. But why was he not reported? Imam Muhammad said he wondered whether he should have done anything differently once he had suspicions about the informant who went by "Maqsood."

A lot has been said about the Bronx terror case since it broke in the media. But an important question that has yet to be publicly debated by all those genuinely concerned about the national security of this nation is this: how should street criminals and psychologically challenged oddballs who are identified by the government as being susceptible to terror fantasies -- but have no connection to global terrorist networks -- be handled by our government?

Should they be tipped over the edge by government agent-provocateurs so as to be caught red-handed, or should they be subjected to a correctional procedure? If it is the latter, whose responsibility would it be to correct those identified as potential threats? Should it be the community's responsibility, government's, society's? It would admittedly not be the role of law enforcement to do so, but is there merit for the creation of a new initiative -- perhaps involving local communities -- to intercept and counter radicalization before it becomes actionable?

The Times Online (UK) reports in an article headlined, "FBI 'lured dimwits' into terror plot," that:

The other question that US security experts were debating was how much had been achieved by assigning more than 100 agents to a year-long investigation of three petty criminals and a mentally ill Haitian immigrant, none of whom had any connection with any known terrorist group. "They were all unsophisticated dimwits," said [defense attorney, Terrance] Kindlon.

In the final analysis, I cannot absolve the Bronx four from personal responsibility, despite the legitimate concerns out there regarding possible entrapment. At the end of the day, at least one of them harbored virulently anti-Semitic and anti-American views, and their actions show demonstrable willingness to engage in bias-motivated violent acts.

But this debate is not so much about the Bronx four, their fates are for the courts to decide. It is, in the end, about understanding the nature of the real terrorist threat against us and raising responsible objections against self-deluding initiatives that seem to seek terror-case quotas by entrapping "intellectually challenged" outcasts and then deceptively marketing their isolated cases as evidence of an imminent and contiguous global threat with homegrown components.