The American Freedom Defense Initiative, the same group that brought you subway ads equating Muslims to savages, is hoping to install yet another round of anti-Muslim posters, this time at Metro-North stations.

The new campaign will feature the headline, "This is Islamic apartheid" above disturbing images, including one with two blindfolded men about to be hanged with nooses.

"Gay under Islamic law (Sharia),” reads the caption underneath.

Pamela Geller, NYC's most outspoken Islamophobe and executive director of the AFDI, submitted the ads to the MTA Tuesday.

Due to a previous court ruling that required the agency to post Geller's other anti-Muslim ads, the new posters are expected to be approved. 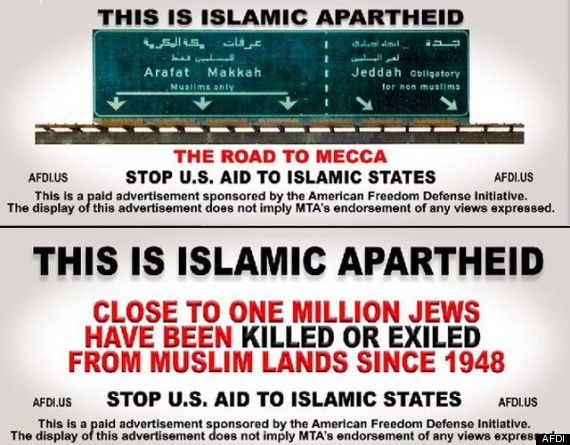 The MTA, however, will likely include a prominent disclaimer on the ads that reads, "This is a paid advertisement sponsored by the American Freedom Defense Initiative. The display of this advertisement does not imply MTA's endorsement of any views expressed."

Geller's ads are in response to a pro-Palestinian campaign by American Muslims For Palestine which hit Metro-North stations on Monday, the first day of Passover.

The posters use a quote from Nobel Peace Prize recipient Desmond Tutu comparing Israel's treatment of the Palestinians to apartheid in South Africa.

Geller wrote of the ads in a blog post:

This anti-Israel ad is exactly the technique that Hitler’s minions used. If you read the writings of Goebbels, the Nazi narrative was that they were the victims. They were the put-upon ones. That’s how they sold annihilation. And this is the same thing. It’s not surprising that Islamic supremacists would appropriate the propaganda methods of the Third Reich, as they partnered with Hitler and shared the same goal.

In August, Geller posted the following billboard at a Metro-North platform: 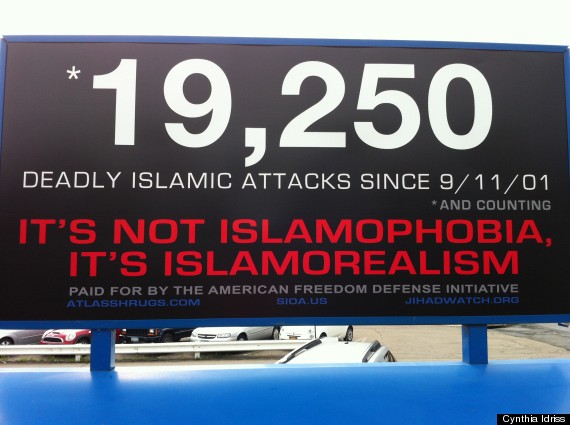 This billboard was in response to a pro-Palestinian ad that read, "4.7 million Palestinians are Classified by the U.N. as Refugees" next to maps showing dwindling Palestine land from 1946 to the present.