Danielle Crittenden wore a burka for a week during her daily life in Washington, D.C. Click here to see a video of her experience, which appears in Canada's National Post.

Part One: Taking On the Veil

'I wonder what it's like to wear Arabic dress?" I said one day to my husband. His eyes sparked with interest. "You mean as in I Dream of Jeannie?"

"No. I mean those black cover-ups they wear in Saudi Arabia and other Middle Eastern countries."

"Seriously. What must it be like to wear something like that day in, day out? Never being able to show your face in public -- or to a man who is not your husband. I don't think Western women appreciate how oppressive that must be."

My husband was not paying attention. "That filmy, translucent fabric, the little sequined top ... If I could impose dress on women, that's what I'd impose." He paused. "Maybe not all women ..."
I ignored him, warming to my rant. "And yet, you never hear a peep of protest about it from the feminist groups over here. They protest the war in Iraq. But the idea that there are people right here who want to shroud women ... to make us all submissive and invisible ... where's the outrage over that?

"And we shouldn't kid ourselves. It's coming here too. It already is here."

The sight of fully veiled women has become disturbingly familiar in shopping malls, airport lounges and Muslim neighbourhoods across North America. I see them sometimes in the shopping mall at Tyson's Corner, in Northern Virginia; I see them often when traveling in Europe. It's strange: North American and European Muslim leaders insist that the Koran does not require full cover-up, that little more is required than modest clothes and a headscarf. Yet one does not hear these leaders speaking out against the spread of the more extreme interpretations of veiling, even as it spreads further and further. 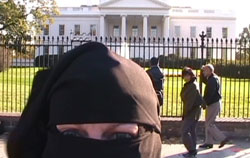 Whether or not veiling is a political or cultural statement, we in the West have to ask: Is this a statement that is tolerable in a free and equal society? Does our deference to minority cultures require us to acquiesce in the subjugation and intimidation of women?

In 2005, Cherie Booth Blair, wife of the former British prime minister, fought a court case to win the right for a girl to wear full cover to her school over the opposition of a Muslim headmistress. (Blair won, but the ruling was overturned this year in the House of Lords. She has since voiced misgivings about the veil.)

In April, 2005, a Muslim dentist in Manchester, England, was caught requiring his female patients to wear cover before he would treat them. (The dentist was found guilty of a breach of professional standards in September.)

Accepting veiling implies acceptance of a larger ideology of female subordination. And that ideology too is finding a receptive audience in our own society. A former attorney-general of Ontario, Canada proposed that the province permit Shariah law for arbitrating domestic disputes between Muslims on a voluntary basis. In the free and equal societies of North America and Europe, we are hearing of more and more cases of forced marriage, confinement of women to their homes, honour killings and female genital mutilation.

Like many women, I am appalled by these trends. As a writer, I am fascinated by them -- and by the cover that both conceals and proclaims them. When I see a woman entirely masked in black cloth, I can't help but wonder what it must be like to be her -- and what it would be like to be fully cloaked in my own life. The garment is at once so alien and so personal, so mundane and yet so fraught with meaning.

Thus one day I found myself sitting down to my computer and entering the search words, "Islamic clothing retail." I decided I would buy the "full Saudi": an abaya, or cloak, plus a niqab, or face cover. I'd wear it for one week here in Washington, D.C., where I am otherwise a journalist and mother of three. I'd do everything I usually do, except I'd do it completely veiled.

One of my first surprises was how many choices came up on my search (about 1.2 million hits, according to Google). There was everything from "Islamic Haute Couture" to "Plus Size Islamic Clothing online store." There were multiple styles of niqab as well: Did I want a mask that just covered the lower half of my face -- sort of like a lobster napkin over the nose -- or did I want more "full coverage"?

I settled upon a outfit pictured on the Web site of a Kuwaiti boutique called Al-Hannah. It looked like something an executioner would wear, if the execution took place in a heavily wooded area infested with mosquitos: a black hood with peephole eyes and two extra layers of netting; long black cloak and black gloves. The catalogue assured me this outfit would be, "Perfect in any weather. Our [abaya] is made from the same high quality, breathable, poly blend georgette fabric worn by women in Iraq and surrounding Gulf states." As for its matching headgear: "Two outer layers wrap around to ears when down. Pull one screen down and you can see out, yet prying eyes can not see in. For extra privacy pull both screens down. Tie closure." I could even use PayPal!

The only real puzzle was sizing. Rather than the usual "small, medium or large," the online form asked for the measurement from my shoulder to feet. There was something pleasing about not having to worry about hips or chest -- and also, something definitely weird, like I was being measured for a bedsheet (which I guess I was). Perhaps the form should have asked, "twin, full, queen, king, California king."

A few weeks later, an odd parcel arrived at my door. It looked like a package someone had shipped 400 years ago but had gone astray in the post: a bundle of coarse white cloth, hand-sewn shut. A rubber band secured its girth. My name and address was scrawled on it in black ink below a postal sticker from the State of Kuwait.

I opened it excitedly, and shook out a pile of black cloth. I'd ordered three outfits, so I could launder one while wearing the other, and have a spare in case any of my friends wanted to join the experiment.

But as I rooted through the pile, trying to discern the different pieces, I realized the vendor had forgotten my niqabs. There was no sense calling Kuwait to complain. Instead, after more Internet surfing, I tracked down a niqab at a shop in the nearby (heavily Muslim) suburb of Falls Church, Virginia.

There, a helpful but curious salesman found the niqab I was looking for.

"If you don't mind me asking, why do you need this?"

"I'm travelling," I said vaguely. (I did not say, "fellow-travelling.")

The man, Pakistani by origin, clearly did not think much of Saudi fashions for women. When I asked him how to put on the niqab, he chuckled and said, "Like Zorro."

He tied it around my head, and then flipped back a top layer of cloth to reveal my eyes. "You can use it again at Halloween," he said, still chuckling.

I startled at my reflection: All that was left of my head were a pair of two intense blue eyes peering back.

I was about to become entirely invisible.