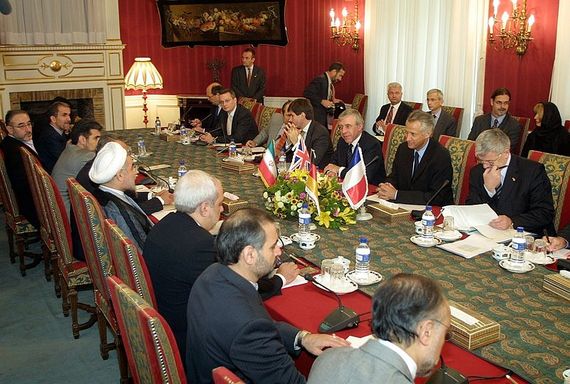 By choosing to speak in English to present a PowerPoint titled "Closing an Unnecessary Crisis: Opening New Horizons," the American-educated Iranian Foreign Minister Mohammad Javad Zarif projected a new Iranian image as he outlined the proposal to representatives of world powers few weeks ago. These talks were the first formal nuclear discussions to take place since the centrist Hassan Rouhani became president. This meeting involved representatives of the Islamic Republic of Iran, primarily Zarif, Iran's Deputy Foreign Minister Abbas Araqchi, and the permanent members of the United Nations Security Council (Britain, China, France, Russia and the United States) as well as Germany, making up the P5+1 group.

These talks will continue in the following weeks, as Zarif optimistically posted on his Facebook page, "The continuation of the negotiations will be in Geneva in a few weeks."

Iranian leaders have primarily viewed the previous talks as positive and constructive negotiations. After the discussions, Araqchi and the spokesman for the Iranian team stated that "serious" talks were conducted in a "highly positive atmosphere." Zarif also pointed out that a "balanced approach" should be taken, with emphasis on dialogue and negotiations to ease Western-imposed economic sanctions, to show that Tehran has the right to enrich uranium according to the NPT and effectively put an end to the country's prolonged economic isolation.

The major question though is centered on how long the dialogue and negotiations should proceed. Considering Iran's current nuclear capabilities and their level of uranium refinement, would putting emphasis on intensified multilateral and bilateral talks be an effective approach? In order to create an answer to this critical political dilemma, Iran's current nuclear status and its shift in the last few months should be examined closely.

Firstly, it is crucial to point out that according to the most recent inspection reports compiled by the International Atomic Energy Agency, the nuclear monitoring organization of the United Nations, Iran's capability to refine uranium has significantly increased in the last year. Uranium is used as fuel, for both peaceful nuclear energy and nuclear weapons. Since January 2013, Iran has made significant nuclear technological gains. The Islamic Republic of Iran has initiated a plutonium reactor to process plutonium in addition to enriching uranium. They have added thousands of advanced centrifuges, with Iranian engineers working on a plant that will produce plutonium. There is no incentive, such as civilian purposes, in processing plutonium in the Islamic Republic of Iran, rather than to develop weapon-grade material. In the last six months, and solely in the main nuclear facility in the city of Natanz, Iranian authorities have approximately quintupled the number of advanced centrifuges to more than 1,000.

Furthermore, the formerly secret facility known as the Fordo Fuel Enrichment Plant near the holy city of Qum, which holds about 3,000 centrifuges, is believed to have achieved full capacity earlier this year. According to a senior U.S. official, this is "the amount needed to build nuclear weapons." According to the IAEA, Iran built the Fordo site in 2007 to secretly begin enriching uranium. Two years after completion, American intelligence, French and British Prime Ministers presented concrete evidence taken by independent satellite monitoring systems and exile reports of the nuclear site to the IAEA.

The most recent quarterly report by the IAEA also detailed how Iran has expanded its infrastructure, installing a new set of advanced equipment in order to purify uranium. This purified uranium can be used to fuel nuclear reactors as well as to create atomic bombs.

While Rouhani has called for "greater transparency" in Iran's nuclear plans and activities, the nation has continued to strongly refuse to allow inspectors to visit Parchin. Parchin is a highly restricted military site located south of Tehran, and is suspected to be the location where Iranian leaders and researchers have conducted experiments to test triggers for nuclear weapons, according to the IAEA.

However, beyond the aforementioned concerns, the critical issue is that Iran has accumulated 185.8 kilograms (roughly 410 pounds) of uranium enriched to about 20 percent purity, according to the IAEA. This is considered to be a short technical step away from uranium refinement to nuclear weapons and bomb-grade material.

The charm offensive by the new Iranian president, and Iran's nuclear delegates, to call for greater dialogue and negotiations signal just more strategies and tactics to buy time. Years of dialogue, sanctions, intensified diplomacy, Track II diplomacy, multilateral, bilateral, and unilateral moves have not yielded any actual results in changing the calculations of Iranian leaders, nor their determinations to halt the country's nuclear activities. Every few years, a new clandestine site is revealed by satellite and intelligence agencies, with Iranian leaders still not allowing the inspection of some crucial nuclear sites.

Iran's foreign minister and his nuclear team promised that in six months they would reach a deal with the West, the IAEA and P5+1 regarding Iran's nuclear program. However, the Iranian nuclear team has made it clear that Iran has the right to continue to enrich uranium, with no pressure will urging Tehran otherwise. By the time the deadline approaches, it is likely to be too late to reach a deal, a futile attempt at best. According to many experts and the Institute for Science and International Security (a nonproliferation monitoring group based in Washington DC) Tehran's current nuclear pace can theoretically create adequate bomb-grade uranium by the middle of 2014.

Considering the level of uranium refinement, technological advancement, and secrecy of certain sites, Iranian leaders only need to buy a bit more time to make the so-called breakout capacity.

A shorter version of this article was first published in The National.

Majid Rafizadeh, a scholar and political scientist, is president of the International American Council.