By Daren Butler and Jonny Hogg

MURSITPINAR, Turkey/ANKARA, Oct 8 (Reuters) - Islamic State fighters launched a renewed assault on the Syrian city of Kobani on Wednesday night, and at least 21 people were killed in riots in neighboring Turkey where Kurds rose up against the government for doing nothing to protect their kin.

Heavily outgunned defenders said Islamic State militants had pushed into two districts of the mainly Kurdish border city late on Wednesday, despite U.S.-led air strikes that the Pentagon acknowledged would probably not be enough to safeguard the town.

In Turkey, street battles raged between Kurdish protesters and police across the mainly Kurdish southeast, in Istanbul and in Ankara, as fallout from war in Syria and Iraq threatened to unravel the NATO member's own delicate Kurdish peace process. The street violence was the worst Turkey has seen in years.

Washington said its war planes, along with those of coalition ally the United Arab Emirates, had struck nine targets in Syria, including six near Kobani that hit Islamic State artillery and armored vehicles. It also struck Islamic State positions in Iraq five times. 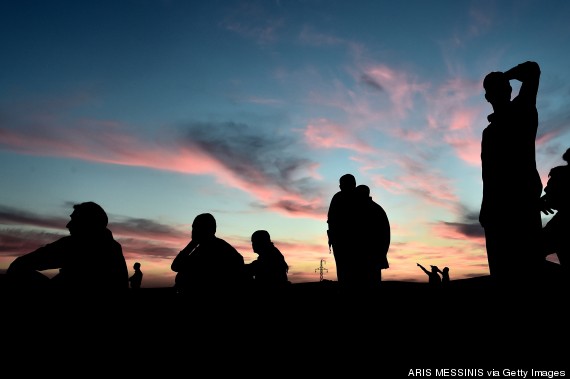 People watch airstrikes on the Syrian town Kobani from the Turkish-Syrian border in Mursitpinar, Turkey on Oct. 8, 2014. (ARIS MESSINIS/AFP/Getty Images)

Nevertheless, Kobani remained under intense bombardment from Islamic State emplacements, within sight of Turkish tanks at the nearby frontier that have so far done nothing to help.

"Tonight, (Islamic State) has entered two districts with heavy weapons including tanks. Civilians may have died because there are very intense clashes," Asya Abdullah, co-chair of the Democratic Union Party (PYD), the main Kurdish group defending the area, told Reuters from inside the town.

U.S. officials were quoted voicing impatience with the Turks for refusing to join the coalition against Islamic State fighters who have seized wide areas of Syria and Iraq.

Turkey says it could join only if Washington agrees to use force against Syrian President Bashar al-Assad and the Sunni Muslim jihadists fighting him in a three-year-old civil war.

Turkey's own Kurds, who make up the majority in the southeast of the country, say President Tayyip Erdogan is stalling while their brethren are killed in Kobani.

Police fired tear gas and water cannon to disperse demonstrators who burned cars and tires. Authorities imposed curfews in at least five provinces, the first time such measures have been used widely since the early 1990s.

Turkish Prime Minister Ahmet Davutoglu told reporters in Ankara that 19 people were killed and 145 wounded in riots across Turkey, vowing that Turkey's own peace process with Kurdish separatists would not be wrecked by "vandalism." Dogan news agency later said the death toll had climbed to 21.

At least 10 people died in clashes in Diyarbakir, the largest Kurdish city in Turkey's southeast. An all-day curfew there from Tuesday night was extended for another day on Wednesday. Pockets of protesters defying the curfew clashed with security forces there on Wednesday.

Others died in clashes between protesters and police in the eastern provinces of Mus, Siirt and Batman. Thirty people were wounded in Istanbul, including eight police officers. 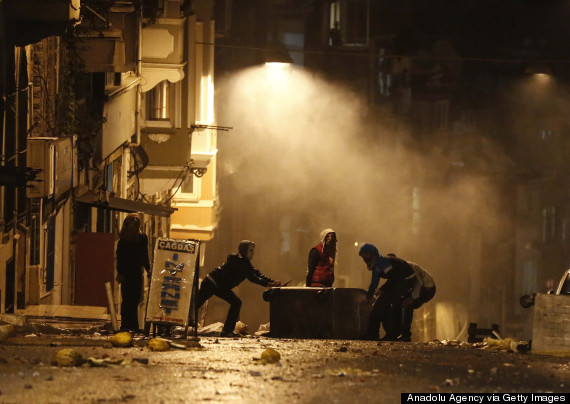 Protestors make barricades against Turkish police during unauthorized demonstrations against the advance of ISIS militants toward central Kobani, on Oct. 8, 2014 in Istanbul. (Bulent Doruk/Anadolu Agency/Getty Images)

Disturbances spread to other countries with Kurdish and Turkish populations. Police in Germany said 14 people were hurt in clashes there between Kurds and radical Islamists.

The unrest in Turkey, which has NATO's second largest armed forces, exposes the difficulty Washington has faced in building a coalition to fight Islamic State in Syria and Iraq, two countries with complex, multi-sided civil wars in which every country in the region has a stake.

Islamic State fighters besieging Kobani hoisted their black flag on the eastern edge of the town on Monday. Since then, U.S.-led air strikes have been redoubled. The town's defenders said earlier on Wednesday the insurgents had been pushed back, but the fighters appeared to be advancing later in the day.

Intense gunfire and loud explosions could be heard on Wednesday morning from across the Turkish frontier. Huge plumes of grey smoke and dust rose above the town, where the United Nations says only a few hundred inhabitants remain.

U.S. officials, acknowledging it will be hard to shield Kobani from the air, have played down its strategic importance.

Secretary of State John Kerry said: "As horrific as it is to watch in real time what is happening in Kobani ..., you have to step back and understand the strategic objective." 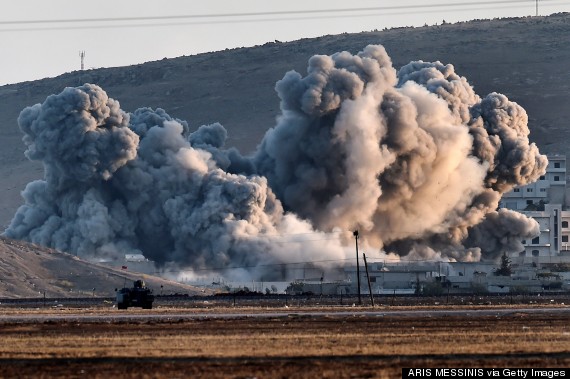 Smoke rises during airstrikes on the Syrian town Kobani seen from the Turkish-Syrian border in Mursitpinar, on Oct. 8, 2014. (ARIS MESSINIS/AFP/Getty Images)

Islamic State has been advancing on the town from three sides and pounding it with artillery despite dogged resistance from heavily outgunned Kurdish forces.

Kurdish media said Kurdish fighters thwarted a car bomb on positions in Kobani, saying the vehicle blew up before reaching its target. An Islamic State source on Twitter said the attack destroyed a police station. Neither account could be verified but a huge explosion could be seen from across the border.

In Turkey, parliament voted last week to authorize cross-border intervention, but Erdogan and his government have so far held back, saying they will join military action only as part of an alliance that also confronts Assad.

Erdogan wants the alliance to enforce a "no-fly zone" to prevent Assad's air force flying over Syrian territory near the Turkish border and create a safe area for an estimated 1.2 million Syrian refugees in Turkey to return. 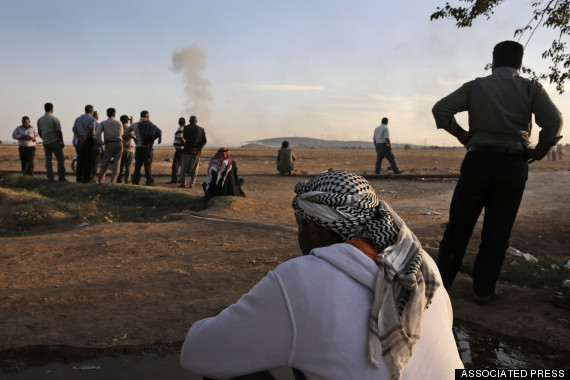 Turkish Kurds watch as airstrikes hit Kobani from Mursitpinar, at the Turkey-Syria border, Oct. 8, 2014. (AP Photo/Lefteris Pitarakis) France said it supported the idea of a safe area, and Britain said it was studying it. But it is clear the proposal has not taken hold in Washington, which has been bombing Islamic State targets in Syria without Assad raising objections, and does not want to be dragged into a conflict against Damascus.

"At the moment, the American air force is flying all over Syria with the permission of the Assad government," said Tim Ripley, a defense expert for Jane's Defense Weekly.

"To try and impose a no-fly zone would potentially involve a major air war against one of the biggest air forces in the Middle East ... which would only be a distraction from the fight against (Islamic State)," he said.

Kerry, repeating lukewarm views of other U.S. officials, said: "The buffer zone is an idea that has been out there. It is worth examining, it's worth looking at very, very closely." Pentagon spokesman Kirby said: "It is now not on the table as a military option that we are considering."

The conflict has already opened up a fissure in relations between the United States and Turkey, its most powerful ally in the area. U.S. Vice President Joe Biden was forced to apologize last week after Erdogan took umbrage at comments Biden made at Harvard University, in which he blamed Turkey's open borders for allowing Islamic State to bring in recruits.

An unnamed senior U.S. official told the New York Times on Tuesday there was "growing angst about Turkey dragging its feet to act to prevent a massacre less than a mile from its border."

"This isn't how a NATO ally acts while hell is unfolding a stone's throw from their border," the official said. 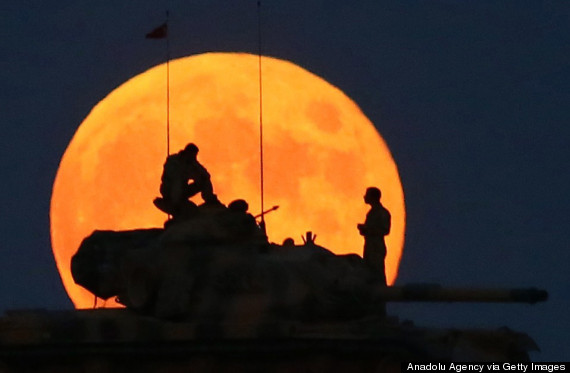 Kerry said Turkey was still deciding what role it would play. Retired U.S. General John Allen, charged with building a coalition against Islamic State after it seized about a third of neighboring Iraq, is due in Turkey this week.

But, while taking in Kobani's refugees and treating its wounded, Turkey has deep reservations about deploying its own army in Syria. Beyond becoming a target for Islamic State, it fears being sucked into Syria's three-year-old civil war.

It also distrusts Syria's Kurds, allies of Turkey's own Kurdistan Workers' Party (PKK), which waged a decades-long insurgency for Kurdish autonomy in which around 40,000 people were killed.

The PKK's jailed leader, Abdullah Ocalan, has said any massacre of Kurds in Kobani would doom a fragile peace process with the Turkish authorities, one of the most important initiatives of Erdogan's decade in power.

The street protests across Turkey were already making the prospect of reconciliation with nationalists seem more remote, as protesters set fire to Turkish flags and attacked statues of the founder of modern Turkey, Mustafa Kemal Ataturk.

Selahattin Demirtas, co-chair of the HDP, Turkey's leading Kurdish party, condemned such acts as "provocations carried out to prevent help coming to the east (Kobani) from the west."