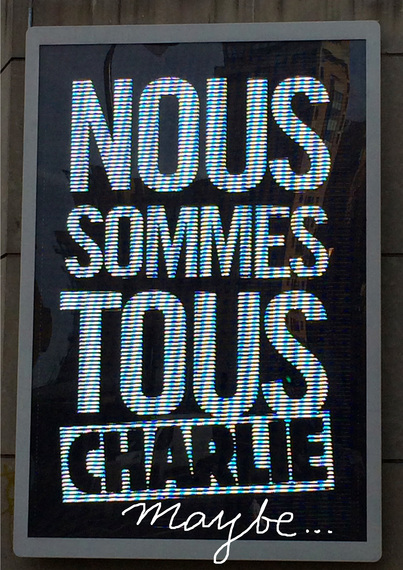 In the last seven years of living in Central London I have been forced off a bus, denied access to others, pushed into oncoming traffic, spat at, winced at, stared at with disgust, and asked to leave my child's prep school. And all because I own a dog.

These encounters involved Muslims; not the Muslim world, but a few individuals whose manner of practicing their faith prohibits them from sharing their space with a dog.

I have been explained by the young Muslim Sri Lankan at my dry cleaner's that touching dogs distances the faithful from Allah, and we laugh together when I see that, despite his mild protestations, he actually likes them -- and I imagine him as a giggly little boy instinctively approaching animals while being reprimanded by his parents.

These days it takes a few isolated exchanges with someone of the Muslim faith to propagate the undercurrent of existing tensions. I too find myself judging others as recipients of a prejudice that undermines western ideals of gender and cultural inclusion and cedes to strands of a non-reformed religion at the core of a European capital. Is this a judgement that opposes Islam, or just fundamentalist Islam, or is this plain ol' Islamophobia? It is the latter: a reaction to what we see as a corrosive threat to secular tolerance because the very nature of secular tolerance is to let others be themselves.  And when one decries the public anti-Islam statements of Kurt Wilders but subconsciously nods at some of his written statements then something is terribly wrong.

At the risk of returning to the west's self-flagellation after Charlie Hebdo's non-western terrorist atrocity, part of that wrongness is a failure to assume some responsibility for what we feel defines us as a civilized and functional society: freedom of speech. That there is a difference between satire and religious or racial incitement and that to acknowledge that difference does not lead down the slippery slope of censorship. Surely freedom of speech should allow for an understanding that it is counter-productive to be portraying Allah as a dog or the holy trinity in a sexual act. Even when the Hassidic jew's curls are pulled at and unravelled it plays in to vague stirrings of ridicule for the sect. These depictions define us more by their sick meanness. Are we, through our stiletto- edged, oh so clever, secular wit truly defending the rights of individuals or contributing to xenophobia, to the kind of prejudice we would most hate about ourselves?

Are we not evolved enough to reveal life's hypocrisies without exhorting to gratuitous cruelty and insult, however much the latter may seem part of our birthright? In fighting extremism of violence with extremism of expression we have sacrificed the sharply poignant, the universally resonant. Last week an English cartoonist wanted to draw Allah, his beloved cat Muezza at his side, wearing a T-shirt saying "Not in my Name". Sadly, he pointed out that there was not one British media outlet that would now publish it for fear of retribution. Surely discernment is a greater form of expression?

Frustration and hostility towards Islam is real within many European hearts. Islamophobia is visceral, dangerously pedestrian, feeding off a disapproval of a few to encompass the prejudice against an entire religion. Though issues undoubtedly exist within Islam, as they do with most orthodox religions, it is a lack of consideration, of manners and education that have defined my unpleasant personal episodes. They would be similarly characterised by my Muslim friends. We all vie for the respect we ourselves would show towards the sensitivities of any other country. So why do we practise what we condemn in others?

And what is achieved when as a result of last week's butchery France's "Front National" gains a legion of new followers? Charlie Hebdo's slain will be turning in their tragically early graves.