I started blogging about our country's "legal" holidays out of concern that, for many, these days were just another day off; that perhaps some reflection on the reasons for our national holidays was in order. Well, it turns out that the Christmas federal holiday is, in fact, just another day off, legally at least.

While the Christmas religious observance is centuries old, a federal Christmas holiday was not recognized until 1870. More surprising, the constitutionality of the legal holiday was not challenged until 1999. In her decision in Ganulin v. United States (ultimately supported by the U.S. Court of Appeals and the Supreme Court), District Court Judge Susan J. Dlott concludes that a Christmas federal holiday does not violate the First Amendment of our Constitution: "By giving federal employees a paid vacation day on Christmas, the government is doing no more than recognizing the cultural significance of the holiday."

Judge Dlott's appreciation of the cultural significance of Christmas is most clearly illustrated, not by her formal decision, but by her Dr. Seuss-inspired poem:

The court will address

Whatever the reason
Constitutional or other
Christmas is not
An act of Big Brother!

Christmas is about joy
And giving and sharing
It is about the child within us
It is mostly about caring!

One is never jailed
For not having a tree
For not going to church
For not spreading glee!

The court will uphold
Seemingly contradictory clauses
Decreeing "The Establishment" and "Santa"
Both worthwhile "Claus(es)"!

We are all better for Santa
The Easter Bunny too
And maybe the Great Pumpkin
To name just a few!

An extra day off
Is hardly high treason
It may be spent as you wish
Regardless of reason.

The court having read
The lessons of Lynch
Refuses to play
The role of the Grinch!

There is room in this country
And in all our hearts too
For different convictions
And a day off too!

The ditty actually lays out the judge's legal reasoning. Employment lawyer Philip Miles's post "Christmas and the Constitution" walks through those legal principles, if you want to read more.

On Christmas night, 1776, General George Washington crossed an ice-clogged Delaware River to take the fight to the British and thus reinvigorated a flagging war for independence. As bold as his move was, it pales in comparison to the idea that we could create the world's first nation-sized, secular republic. Before America, nations existed by virtue of coercive political authority and common religious convictions. Now, mutual respect for individual religious and cultural traditions is part of the glue that we, "the people," use to hold our country together. 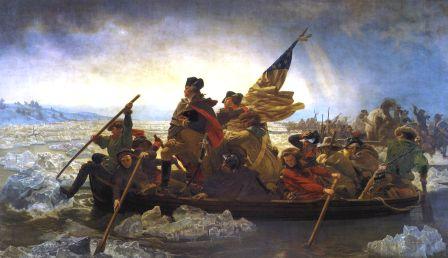 So in the United States, on December 25th you can celebrate the birth of Christ, the visit of a jolly old elf, or a day not spent at work. It's up to you, and no matter your faith or absence of faith, that is a blessing. So to paraphrase Linus from A Charlie Brown Christmas, another of our Christmas culture classics: That's what the legal Christmas holiday is all about, America.