When it was hard for me to find vegan food in prison Abu-Sayyaf used to bring food to the bars at the front of my jail cell. He knew I was a strict vegan and that I abstained from the consumption of all animal products. He used to read all the ingredients on packages and even then double check with me if the food was something that would fit my diet. I am sure that in the government's eyes they assume that Abu-Sayyaf wanted something from me in return, but in reality Abu-Sayyaf only wanted to make sure that I was safe, healthy, well fed, and taken care of.

Before Abu-Sayyaf was an inmate in a secretive US political prison called a "Communications Management Unit" Abu-Sayyaf was a computer programmer for a software company in Florida. Abu-Sayyaf was an immigrant, he attained rights as a US citizen, he gave back to his community, to his co-workers, he generously donated to UNICEF, and he gave much of what he had to people outside of this country, specifically to children in Bosnia. 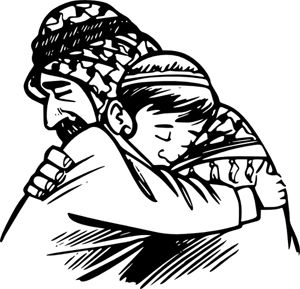 Abu-Sayyaf saved the money he made at his company, volunteered for charities, and worked with one to help build an orphanage in Bosnia. He wanted to bring dignity and hope to the lives of Bosnian youth who had lost their parents in the Serb-Croat war of the 1990's. In their indictment against Abu-Sayyaf the government alleges that he was affiliated with Benevolence International, a charity once championed by the Clinton administration for their fight against ethnic cleansing, but in the politically liquid times following the attacks of September 11th, 2001, found themselves under scrutiny. In March of 2002 the Sarajevo offices of the charity were raided by Bosnian Police and during the raid an unbelievable list of non-profits titled "The Golden Chain" was reportedly found jotted on a piece of loose leaf paper on the floor of the office. The CIA will later contend that the list found cataloged the top contributors to Al Qaeda. The Bush administration quickly labeled Benevolence International & the bizarre laundry list of other non-combative groups as terrorist organizations. Shortly thereafter Abu-Sayyaf would find himself indicted on charges of providing monetary aid to a "terrorist organization."

Abu-Sayeff found himself in the center of a press circus, packaged in what federal prosecutors nickname a "piggy-back" indictment where he stood trial alongside Jose Padilla, a name so spectacularly soiled in the public eye that anyone standing alongside of him would have little chance of beating trial. Abu-Sayyaf spent 4 years in solitary confinement in a Florida prison before he was moved to the secretive government facility in Marion, Illinois. He was the first inmate to arrive at the facility and when he arrived the prison guards were ordered not to talk to him.

He spent another 2 weeks by himself before other inmates were transferred there. It was then and there that I met Abu-Sayyaf. I too was sequestered to this secret prison, for reasons that to this day remain vague and over broad. Abu-Sayyaf and I watched as more men would come to the unit almost weekly. We saw a pattern develop. 4 Muslims and then one non-Muslim, 4 Muslims and one non-Muslim. My theory that my placement there was for balance, a sort of safety valve on what seemed like an almost unavoidable ethnic-discrimination lawsuit, was verified one afternoon when a guard said to me, "kid..., keep your head up; you know your just here to balance things out. You'll be home soon enough." As the guards got more comfortable with their own bizarre restrictions they started to slip up and refer to some of us non-Muslims as "balancers." They never directly said it, but almost daily they acknowledged the fact that this facility was illegally conceived outside of the parameters of the Administrative Procedures Act.

A little over a year has passed since I walked out of the secretive CMU facility and began my road home to a somewhat normal life. Abu-Sayyaf was not as fortunate as I was. He is slated to serve at least another 10 years in the CMU and then it is expected that he will be deported, ...where to no one really knows...

Abu-Sayyaf was born Palestinian, so in the eyes of the world government he is now a stateless citizen. He is not charged with substantive violent crimes and yet is unjustly labeled a terrorist by the United States, and presumably it's allies. What is even more heart-trampling is Abu-Sayyaf's endless love for his children. Abu-Sayyaf's name by birth is Adham Amin Hassoun, but he wants to be known as Abu-Sayyaf; Abu, in Arabic, means father, Sayyaf is the name of Adham's son. He told me that he has been stripped of everything he once had, with the exception of the boundless love he has for his family and children. He wants to be known only as the father of his son, the one thing in this world that makes him most proud.

There are 70 other men in situations like Abu-Sayyaf's split between the populace at the Marion CMU facility and a second CMU facility in Terre Haute, Indiana. These are 70 stories of doctors allegedly breaching economic sanctions to deliver penicillin and insulin to children in need, or anti-war tax protestors, not stories of car bombers, hijackers, or the incidents that most of us have come to identify as terror-related. These are 70 stories that our government is ashamed of, and hopes to keep tucked away within these restrictive, secretive, purely political prisons, out of the reach of the media, out of the reach of visitors, away from the touch of their families and children, hampered by vetted mail, a lack of telephone communication, and -- worst of all -- severed from constitutionally protected rights of due process.

These 70 men have been stripped of their voices, and because of that they need ours. I implore everyone who reads this to participate in the first public comment period Congress is offering since these units were first illegally established in 2006. The Federal Bureau of Prisons and it's director Harley Lappin need to see that you, the public, care about the basic human rights of these men in the CMUs, and want to see them matriculated into general population prisons where they can at the very least exercise the same rights to due process, privileged communications with their legal counsel, and once again be able to visit with and touch their family members and loved ones (like other prisoners in general population are allowed.) Please submit comments online, write the address below and please send a copy of your letter to the Center For Constitutional Rights. The Center For Constitutional Rights will outline your concerns in an argument orated to Congress. This public comment period will only be open until June 7th, and CCR is asking that you submit your letters by June 2nd, 2010 so that they can be included in their argument.

Please don't ever doubt the effectiveness of your letters when it comes to advocating for these men. Contribute a comment to preserve our fragile democracy. Do it because it is fundamentally right. Do it because to heal the wounds of wars it takes selfless acts of love. Your letters can bring a little love back to these men. Your letters can allow Adham to hold Sayyaf once again. You can submit your comments online or through the mail. Please send concise comments.

If you submit comments via regular mail, please send them to the following address and include the following docket number in your correspondence:

Please consider submitting your comments by June 2, 2010* and sending The Center for Constitutional Rights a copy of your comments as we're hoping to collect these pieces to illustrate the depth of collective public outcry over the creation of the CMUs.