Col. Richard Kemp CBE, is a former Commander of British Forces in Afghanistan and one of the most highly decorated and respected officers in the British Army. He has spent 30 years of his career fighting terrorism in the UK and around the world.

That makes him more qualified than most to comment on the current hostilities between Israel and Hamas, which entered into a fragile cease-fire overnight. Kemp has been in Israel since last Friday, two days after Israel commenced Operation "Pillar of Defense" on November 14, in response to ongoing rocket fire from the Hamas-controlled Gaza Strip.

He says he came here in order to "get a first hand feel" and "see as much as I can for myself." 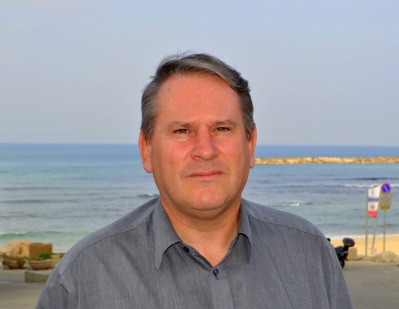 Col. Kemp in Israel this week. [Photo courtesy of the author.]

Kemp, however, is no stranger to this region, or the conflict between Israel and Hamas. In October 2009, he testified before the UN Human Rights Council in response to the Goldstone Report, which accused Israel of committing war crimes and crimes against humanity during the 2009 Gaza War (Operation 'Cast Lead'). At the time, Kemp stated that "during Operation Cast Lead, the Israeli Defense Forces did more to safeguard the rights of civilians in the combat zones than any other army in the history of warfare." And now? Kemp believes Israel has continued to take "unprecedented steps" to protect Palestinian civilians in Gaza, concluding, "I don't think anybody can do more in these circumstances," which include Hamas regularly firing from heavily populated civilian areas in breach of international humanitarian law. Kemp acknowledges that mistakes can, and will, be made, but says Israel is doing "everything it can to prevent civilian casualties," including taking some "extraordinary steps in a time of war," such as providing fuel, water and electricity, while also dropping leaflets and sending text messages, warning residents of impending strikes. Asked to explain why Israel has gone to such extremes, often at the risk to its own soldiers and benefiting the Hamas, Kemp says: "It's an indication of the humanitarian concerns that Israel has for the civilian population among the enemy it is fighting."

Kemp also adds that some of the steps Israel has put in place for safeguarding civilian life in war have been adopted by NATO forces and applied in Afghanistan, where U.S. and British troops continue to serve. Having closely followed events in the region, Kemp believes Israel was fully justified in commencing this operation, saying "I don't believe Israel had any choice" after Hamas and other terrorist groups in Gaza stepped up their missile attacks over the last few months. Before the operation commenced, some 800 rockets were fired from Gaza at southern Israel this year alone, with 12,000 rockets fired by Hamas over the course of the past 12 years. Kemp believes that the Israeli government "showed enormous restraint over a long period of time in the face of repeated missile attacks" but that "no government in the world could sit back and allow these kinds of attacks to continue on its civilian population."

Further, Kemp adds that Iran "helped precipitate" this operation by arming Hamas, whom he refers to as a "client of Iran" with long-range missiles capable of reaching Tel Aviv and the nation's capital, Jerusalem. Quite simply, he says Israel "could not accept" such a situation on its doorstep, where Hamas is able to target almost half its population with advanced weapons, such as the Fajr-5 missile.

In Kemp's assessment, the IDF conducted a "very effective campaign" in eliminating key Hamas leaders and ammunitions, with comparatively few civilian casualties. He puts this down to significant progress in Israeli intelligence and sophistication of technology, such as the Iron Dome missile defense system, which he calls a "game-changer." He also stresses the "enormous care" taken by the Israeli Air Force in their precision targeting of Hamas terrorists.

Turning to the cease-fire, which was agreed to overnight between Israel and Hamas, Kemp concedes this is a "major risk for Netanyahu." Although he believes Hamas will undoubtedly portray this as a victory, ultimately, Kemp says Netanyahu achieved his key objective of "re-establishing deterrence" and causing "sufficient damage to Hamas's weapons stocks and leadership."

The major challenge now, according to Kemp, is "achieving verifiable prevention of Hamas re-arming." In this regard, he says the "key focuses are on Egypt taking responsibility for properly controlling their border with Gaza, and international pressure on Iran to prevent them continuing to push weapons in to Hamas."

Col. Richard Kemp is indeed a remarkable individual; a brave and heroic soldier who has served his country with distinction, fighting terrorism around the world for over 30 years. His philosophy is simple though: "I see what I see. And I see Israel, a Western democratic state fighting a terrorist organization."