Israel's pre-election polls miss the mark. Americans continue to be more sympathetic and supportive to Israel. And back in the U.S. another poll shows Hillary Clinton leading in the primary and general elections. This is HuffPollster for Wednesday, March 18, 2015.

Despite 14 polls conducted during the final week of the campaign pointing to the opposite result, Benjamin Netanyahu's Likud party emerged as the leader in Israel's parliamentary elections, held on Tuesday.

The Likud's apparent six seat lead (30 to 24) over Isaac Herzog's Zionist Union also ran counter to the projections of Israel's three most closely watched exit polls, which had forecast a near uniform 27 to 27 seat tie as voting came to a close in Israel on Thursday night.

The discrepancy between the results and the final pre-election polls is easier to explain than the apparent exit poll error. The polls understated support for Netanyahu's Likud, but the shift appeared to come at the expense of two rival "nationalist" right-wing parties. With 99 percent of precincts counted, the Jerusalem Post reports that Likud will win 30 seats in Israel's parliament, 7-8 seats more than the pre-election poll averages predicted. Meanwhile, Naftali Bennett's Habayit Hayehudi party won eight seats, 3-4 fewer than in the pre-election polls, and the far right party Yachad, which had polled at four seats, was shut out due to falling below a required 3.25 percent vote threshold. 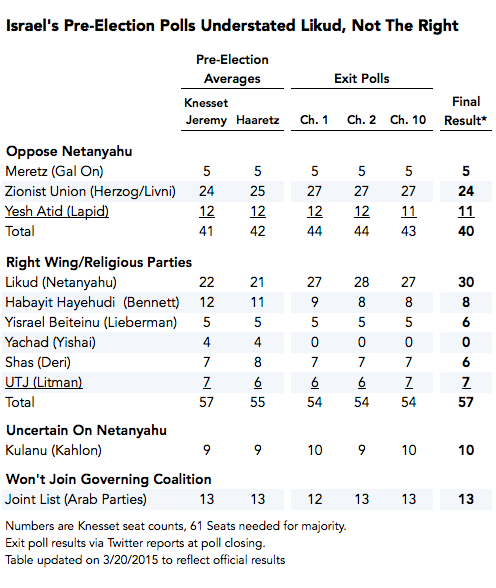 The pre-election surveys were conducted and released before the campaign's final five days when Israeli law forbids the publication of new polls. Netanyahu had explicitly targeted supporters of the rival nationalist parties in his final campaign appeals. The Israeli polling blackout applies only to their publication, and the campaigns continued to poll over the final weekend. The Jerusalem Post's Gil Hoffman reported on Twitter on Monday that final internal tracking polls conducted by three of the parties "all show tighter race than we thought last week."

Despite the apparent late shift, the pre-election polling was close to the mark in predicting both support for Zionist Union and the size of the right-wing block. Pre-election poll averages forecast a total of 55 to 57 seats for the combination of Likud and the other nationalist and religious parties, essentially matching the 57 seat result.

The error in the published Israeli exit polls is less explicable. With remarkable uniformity, the three exit polls conducted by Israel's leading television stations understated both the Likud margin over Zionist Union, and the right wing-block over the parties committed to oppose Netanyahu by a net six seats. All polls are subject to purely random variation, which in this case should have been magnified by the Knesset seat-count calculation, expanding percentages that add to 100 to a seat-count of 120. Yet in this case the results to the three exit polls differed by no more than one seat in estimates of 11 parties.

HuffPollster can barely begin to speculate about the reasons for failures in the exit and pre-election polls given the profound lack of transparency of their methods. Our pre-election review of poll articles published in both Hebrew and English found mention of nothing beyond survey dates, sample size and the "margin of error" for pre-election polls. Online reports in English featured even less methodological detail about Tuesday's exit poll results, which were broadcast on Israeli television.

On Monday, FiveThirtyEight attributed to Jeremy Saltan, the Israeli political commentator and election forecaster known as "Knesset Jeremy," the observation that pre-election polls could be "flawed in addition to outdated" and "vary widely by how people are polled -- by landline, cellphone or Internet." They also linked to a report by Israeli forecaster Batelbe60 identifying "what looks like 'herding' in the Israeli polls." If Israel's pollsters are to regain the confidence of their audience both internally and world-wide, they will need to start with full disclosure of how they conducted their surveys and why any differences in the methods appeared to produce so little variation in polls released in the campaign's final hours.

Exit pollsters respond - Dan Williams: "Grilled on the [exit poll] discrepancy, Channel 2 TV's veteran pollster Mina Tzemach said many Likud voters declined to take part in replicating their vote in the dummy ballot boxes set up by survey-taking companies outside voting stations. Even though exit polls are anonymous, she suggested such reticence might have cultural roots for Israelis originally from countries with different political regimes in which they worry about sharing their private voting choices. 'In certain voting stations, voting stations in places where there are a lot of new immigrants, pro-Likud ballot boxes, the percent of those who voted (in the exit polls) was especially low,' Tzemach told Israel's Army Radio. Fellow survey-taker Camil Fuchs agreed, saying final counts from voting stations he had monitored showed that a significant number of Likud supporters had not participated in exit polls." [Reuters]

Jeffrey Goldberg: "So, about those Israeli pollsters...." [@JeffreyGoldberg]

Anshel Pfeffer, Haaretz: "We'll never know how much of 9% swing was down to massive polling error & how much Netanyhu's fear mongering endgame. Either way astonishing" [@AnshelPfeffer]

Will Cubbison: "So yes, Likud vastly over performed, but the left right divide is exactly what [polls] predicted." [@wccubbison]

Nate Cohn: "And this has been the Israeli edition of our recurring series: exit polls bad, counting votes good" [@Nate_Cohn]

AMERICANS' VIEW OF ISRAEL STABLE OVER TIME - Kathleen Weldon: "In March 1948, before the state of Israel was officially established, a Gallup poll asked the U.S. public where their sympathies lay in the fighting between the Arabs and Jews in Palestine. Twenty-eight percent said with the Jewish people, 11% the Arabs, and 44% neither. From the late 1960s to today, Americans have consistently sympathized more with Israel. Even at the point when personal favor toward Israel was at its lowest - after the Sabra and Shatila massacre in 1982 - feelings for the Palestinians only barely reached the level of those for Israel. However, a substantial proportion of the public through the years have not expressed partiality to either side, saying instead that they sympathize with neither or both, or that they don't know." [HuffPost]

CLINTON CONTINUES TO MAINTAIN STRONG LEAD NATIONALLY - Jennifer Agiesta: "The former secretary of state maintains a broad lead over the field of potential Democratic challengers she could face in a nomination contest and sizable advantages over the leading contenders from the Republican side in general election match-ups. Former Florida Gov. Jeb Bush tops the possible field for the Republican Party's nomination race, followed by Wisconsin Gov. Scott Walker… [N]one of the top candidates in this field gets within 10 points of Hillary Clinton in a series of hypothetical general election matchups. Rand Paul comes closest, with 43% saying they'd be more likely to back him while 54% choose Clinton. The two candidates who currently top the GOP field, Bush and Walker, match up equally against Clinton, with each carrying 40% to her 55%. Huckabee gets 41% to Clinton's 55% and Carson has 40% to Clinton's 56%... Though Clinton's favorability rating has taken a hit recently, her prospects in 2016 appear largely unchanged compared to polls conducted before news broke about her use of a personal email address and home-based server while serving as secretary of state." [CNN]

AMERICANS NOT OKAY WITH OPTING OUT OF STANDARDIZED TESTS - Rebecca Klein: "Even though most Americans think that kids are given too many standardized tests in school these days, that doesn't necessarily mean they think kids should have the ability to opt out of these assessments, according to new HuffPost/YouGov poll. This month, as schools around the country are giving statewide Partnership for Assessment of Readiness for College and Careers tests, or PARCC assessments, a contingency of families who refuse to participate in standardized testing have been thrust into the spotlight...Many respondents reported feeling that standardized testing has done more harm than good over the past 10 years...Yet, 43 percent of respondents said they do not think K-12 students should be able to opt out of these tests as a form of protest." [HuffPost]

-Economic confidence ticks back up. [Gallup]

-Voters weigh in on possible measures in the 2015 Budget. [YouGov]

-Pew Research has a new interactive map that measures views on morality across 40 countries. [Pew]

-Jeb Bush places all bets on Virginia for his NCAA basketball bracket. [NYT]

UPDATE: The table in this story was updated on March 20 to reflect the official election results, which differed by one seat each for four small parties (Meretz, Shas, UTJ and the Joint List) from those published by the Jerusalem Post early Wednesday morning. The table also adds a new heading for the Joint List -- "Won't Join Governing Coalition" -- to better reflect their position as expressed before the election. 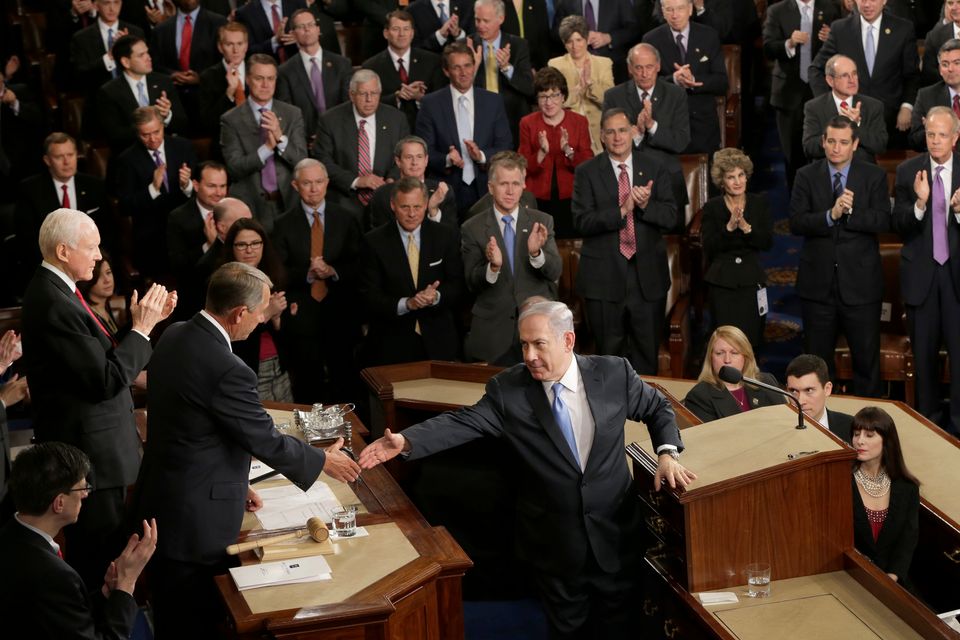