With a seemingly non-stop flow of bleak news coming out of Gaza and Israel, it's all too common to view the latest flareup in this regional conflict as a black-and-white battle between two extreme and intractable ideologies.

In this atmosphere, moderate voices are often muted by the cacophony of violence and despair. The stories below, however, remind us that there are, in fact, plenty of voices on all sides calling for mutual understanding. Not all Palestinians and Israelis -- nor all Muslims and Jews -- agree with the destructive actions perpetuated in their name. And when the most natural thing might seem to be to take your place on one side of the battle lines, there are still those trying to meet in the middle in hopes of finding empathy and maybe even peace in the most unlikely of places.

Condolences As An “Act Of Good Will”

Tag Meir, a coalition of 40 organizations that promotes “Jewish-Arab coexistence and peace-building,” arranged for over 350 Israelis to pay their respects to the family of Mohammad Abu Khdeir, the Palestinian teen who was murdered in what is suspected to have been a revenge attack for the abduction and killing of three Israeli students.

Rabbi Ron Kronish, a leader of the peace initiative, explained the motivation behind the act of solidarity: “We went to pay a condolence visit to this Palestinian family whose son was brutally murdered as an act of religious obligation and humanistic solidarity. Our visit was warmly received by our Palestinian neighbors who were visibly moved by our empathetic act of good will.” 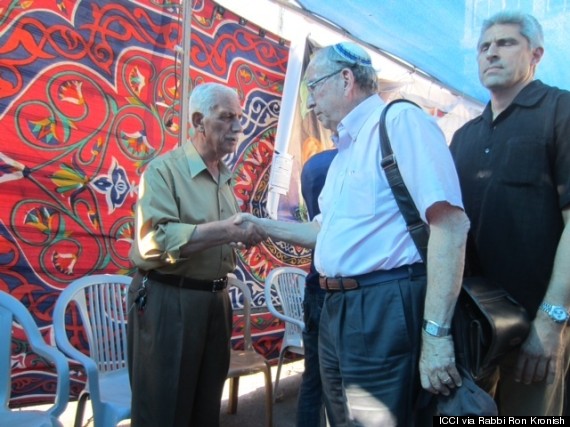 Two members of The Parents Circle, an organization of over 600 Palestinian and Israeli families who have lost a close family member in the conflict, joined Michel Martin on NPR to discuss the current crisis.

Robi Damelin, whose son was shot by a Palestinian sniper, and Bassam Aramin, whose daughter was killed by Israeli border police, stressed the importance of forgiveness and understanding the context behind the violence. Damelin said: “If I can travel with Bassam all over the world and talk in the same voice, surely that should be some kind of example. We cannot share this land just with graves.”

The “Choose Life” initiative organized a worldwide communal fast for Jews and Arabs on July 15. The campaign coincided with ritual fasting in both Judaism and Islam. Jews commemorated the breaching of Jerusalem’s walls before the destruction of the Second Temple in the year 70. Muslims observed the 18th day of Ramadan.

Participation ranged from the Middle East to the UK and the U.S. In Chicago, for example, people prayed together at a local square. The effort spread to social media with the hashtag #FastForPeace.

Last nite was at hopeful #jewish #muslim iftar. Moved by similar prayers to end day of fasting in both our faiths. #fastforpeace #interfaith

Israeli Surgeons Save Lives Of Palestinian Children Amid Conflict

Barbara Kay reports for the National Post how Palestinian children from Gaza and the West Bank seeking life-saving heart operations are treated by Israeli surgeons at Israel’s Wolfson Medical Center in Holon, near Tel Aviv. Every Tuesday for the past 18 years, the religiously non-partisan international charity Save a Child’s Heart (SACH) has brought Palestinian children to the medical center for treatment. SACH's medical team has continued to take care of children coming in from across the Arab region, despite the escalating violence. "Children are not part of the conflict," says Dr. Akiva Tamir, SACH's chief cardiologist.

Protesters Plead For An End To Nationalistic Violence

Hundreds of Israelis gathered in downtown Jerusalem on July 2 to condemn nationalistic violence that emerged in the wake of the murders of a Palestinian youth and three Israeli teens. According to the Times of Israel, most of the demonstrators were young and secular. The demonstrators carried banners that read, “We mourn, we don’t take revenge.”

“Dragging teenagers into a political conflict, on either side, is illegitimate. ... The way to deal with this is through conversation and dialogue. There are those who incite and those who calm things down,” said Michal Biran, a member of Israel's parliament.

'Jews And Arabs Refuse To Be Enemies'

Tweeps and Facebook users have taken to the slogan “Jews and Arabs refuse to be enemies” to promote friendship amid the escalating violence. People have posed for photos alone or in interfaith pairs, holding up signs with the slogan. The phrase has become a trending Twitter hashtag and has its own Facebook page.

Nick Wing contributed to this story.