When a group of Arab college students visiting New York met last week for a Ramadan iftar, they were greeted with an unexpected keynote speech.

Rabbi Marc Schneier, head of The Hampton Synagogue on Long Island and the leader of the Foundation for Ethnic Understanding, an interfaith-oriented nonprofit, had come by for what initially seemed simple and routine: Sharing about his religion and his belief in Muslim-Jewish friendship. Instead, he addressed the tension in the room full of Muslims, and the space between his views and theirs on Israel and Gaza, now on day 24 of fighting with more than 1,300 dead. Israel and Hamas agreed to a 72-hour ceasefire that begins Friday.

"I don't see an end to this conflict until more Muslims speak about against terror and evil in their midst," Schneier said in an interview, paraphrasing his speech at Nusantara, a Muslim-run charity, to students who hailed from Iraq, Lebanon, Yemen and Turkey.

Afterward, prominent New York mosque leader Imam Shamsi Ali, who was hosting the event, had his turn to speak. "I, too, blame Hamas," he said later, recalling his words, "but I also blame Israel, which has killed thousands of innocent lives." 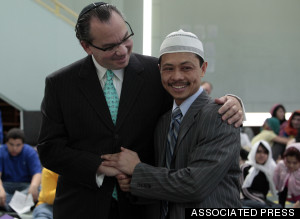 Rabbi Marc Schneier, president of The Foundation for Ethnic Understanding, and Imam Shamsi Ali, embrace in on May 21, 2009, at the Islamic Cultural Center of New York, where Ali used to be the lead imam. Shamsi is currently the imam of the Jamaica Muslim Center and Al-Hikmah mosques in New York.

The seemingly awkward exchange between two friends -- the duo co-authored a book last year on Muslim-Jewish relations -- underscored a unique challenge that confronts the rabbis, imams, pastors and other religious activists engaged in the vast, growing network of U.S. interfaith relations that has blossomed since Sept. 11, 2001.

"It's the 800-pound elephant in the room when we [Muslims and Jews] get together," said Ali. "We can't be hijacked by our emotions. We can't throw fire on fire."

The idea that people of one religion should learn about those of others is millennia old, a byproduct of wars between religious and ethnic groups. It picked up and became an organized movement in the 20th century, as major religious institutions encouraged dialogue outside any purpose of conversion.

From local inter-religious councils to national coalitions, the groups vary in activity. The Interfaith Conference of Greater Milwaukee, which recently hosted a service for "peace in the Middle East," meets regularly for small interfaith dinners in members' homes. In Richmond, Virginia, interfaith leaders have open houses at places of worship to increase religious literacy. The Chicago-based Council for a Parliament of the World's Religions hosts international conferences for thousands of religious leaders every few years.

Two major, often opposing threads have lingered as the interfaith movement has grown: How much should interfaith partners keep the focus on shared beliefs and values, instead of discussing and debating contrasting world views?

It's a question that has vexed American interfaith leaders recently. When it comes to interfaith dialogue, the Israeli-Palestinian conflict doesn't always make the cut because of strong disagreements, interfaith workers say. It's even harder in a time of war, they add.

"There are some things where it's very clear that our commitment to justice call us to speak up and take a position. The problem here is that there are two sides and people fall on both," said Mary Nelson, executive director of the Council for a Parliament of the World's Religions. 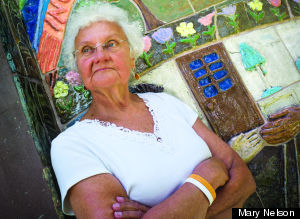 Mary Nelson, executive director of the Chicago-based Council for a Parliament of the World's Religions.

While protests surrounding the Gaza situation in Tel Aviv and New York have included Jews critical of Israel and Muslims who are against Hamas, views on war in a region with strong ties to the origins of both faiths often fall along religious lines. Polls have shown American Jews to be reliably in support of Israel. Data is slim on Muslims, though major Muslim organizations have strongly denounced Israel's recent actions.

"In order to foster interfaith relations, it's important to not talk about things that separate people. In some cases it's important to talk about those things that make us different," said Rabbi Yehuda Sarna, a chaplain at New York University whose work alongside the university's Muslim chaplain was featured in "Of Many," a documentary released this year. "It's part of trying to genuinely understand other people."

As tensions mounted in the region last month after Israeli teens from a West Bank settlement and a Palestinian teen from East Jerusalem were kidnapped and murdered, Sarna visited the families of Naftali Fraenkel, one of the Jewish victims, and joined 350 Israelis to mourn and shake hands with the relatives of Mohammed Abu Khdeir, the slain Palestinian.

"It was a very profound and emotional encounter," Sarna said of the visit that organized by Tag Meir ("Spreading the Light"), an interfaith coalition that includes the Interreligious Coordinating Council of Israel. Last week, a Tag Meir delegation visited an injured Israeli soldier and an Arab hate crime victim at a Hadassah Ein Kerem hospital in Jerusalem. But as kidnappings have given way to rockets and bombers flying across borders, Sarna said grander interfaith gestures have become more difficult.

The conversations are all the more straining now, he and other interfaith leaders said. 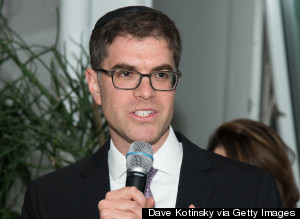 Historically, the nation's largest and most influential interfaith coalitions have quickly and frequently moved to denounce injustice. But as the death toll and propaganda war between Israel and Gaza mount, responses have varied, from public silence and muted calls for prayer, to statements of support for Israel or Gaza. And in the case of Schneier and Ali, vocal disagreement punctuated by hugs.

Take the Council for a Parliament of the World's Religions. Its board of 25 clergy and activists includes those from Muslim, Jewish, Jain, Ba'hai, Zoroastrian, Pagan, Hindu, Sikh and Christian traditions debated daily via email before releasing a statement on Israel and Gaza last Thursday. It called for an end to the Gaza blockade and for world leaders to "ensure the freedom, self-determination, security, and equal rights for Palestinians and Israelis." Several board members considered abstaining from supporting the statement, while one dissented, said Nelson, the executive director.

Disagreement over the situation Israel and Gaza has also ignited social media vitriol, say leaders of the New York-based Tanenbaum Center for Interreligous Understanding, a nonprofit that creates workshops and educational guides to combat religious prejudice. The group is tracking social media discussions on Israel and Gaza as it prepares for future workshops with businesses, hospitals and schools on how to address and prevent religious conflict. "We concerned that the conflict in Israel and Gaza will exacerbate tensions in those settings," said CEO Joyce Dubensky 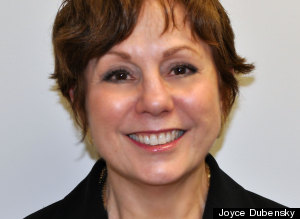 Tanenbaum, which runs retreats, conducts trainings and gives organizational support for "peacemakers" who work in conflict zones, currently has two in Israel and an additional one who works there part-time, but none in Gaza or the West Bank, said Dubensky. The peacemakers -- usually natives to the region -- have previously launched interfaith schools and summer camps for Israeli and Palestinian children.

On a personal level, those like Schneier say having close relationships with Muslims helps them hold difficult conversations about Gaza and the West Bank among their own religious communities. After a meeting with Palestinian Authority President Mahmoud Abbas where the rabbi asked Abbas to make a statement on the Holocaust, the president called it the "the most heinous crime to have occurred against humanity in the modern era.” Schneier has since found more goodwill among Jewish leaders to discuss the cause for Palestinian statehood.

But the daily violence is still an "an in-your-face challenge" for friendships among Jews and Israelis for Rabia Chaudry, a Maryland-based immigration lawyer and blogger. Chaudry left Israel in early June after spending two weeks in a Jewish study program for American Muslims hosted by the Shalom Hartman Institute.

In the past week, Chaudry has posted dozens of articles to Facebook that are critical of Israel's actions. Some Jewish friends have found them controversial and offensive, while Muslims have criticized her for an opinion piece she wrote for Time.com, "What a Muslim American Learned From Zionists," which came out just before the latest fighting began. 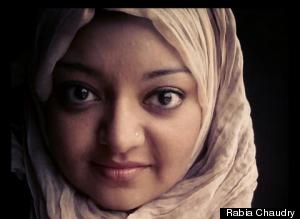 Rabia Chaudry, a Maryland-based interfaith activist who believes Israel has gone too far in Gaza, says the conflict has presented a challenge for her interfaith friendships.

"The number of lives you affect is a moral question" as to whether Israel is justified in its attacks, Chaudry commented on one of the recent articles she shared online, about the high death toll among Palestinians compared with Israelis.

A friend who disagreed "kindly" messaged her to explain his view and ask about hers. They agreed to disagree, but said they both mourned any loss of life.

"I give him credit," Chaudry later reflected. "We have to have that kind of exchange. I have to not disrespect him."

That kind of polite back-and-forth is something she's only more recently learned to finesse through her interfaith experiences, said Chaudry, the former president of the Muslim Coalition of Connecticut. "You get so committed to the echo chamber, that you don't even see what the narrative is in the other community," she said. "So how do you strategize about how to talk to them about what you believe is happening in Israel and Palestine? In some instances you stand firm, such as that the occupation must end."

PHOTO GALLERY
Give Peace A Chance