It's hard to shake away the utterly depressing feeling that comes with news coverage these days. IDF and Hamas are at it again, a vicious cycle of violence, but this time it feels much more intense. While war rages on the ground in Gaza and across Israeli skies, there's an all-out information war unraveling in social networked spaces.

Not only is there much more media produced, but it is coming at us at a faster pace, from many more sources. As we construct our online profiles based on what we already know, what we're interested in, and what we're recommended, social networks are perfectly designed to reinforce our existing beliefs. Personalized spaces, optimized for engagement, prioritize content that is likely to generate more traffic; the more we click, share, like, the higher engagement tracked on the service. Content that makes us uncomfortable, is filtered out.

In a broadcast society, there were gatekeepers, the editors, and they controlled the flows of information. Along came the Internet and it swept them out of the way, and it allowed all of us to connect together, and it was awesome. But that's not actually what's happening right now.-- Eli Pariser, the Filter Bubble.

We're not seeing different viewpoints, but rather more of the same.

A healthy democracy is contingent on having a healthy media ecosystem. As builders of these online networked spaces, how do we make sure we optimizing not only for traffic and engagement, but also an informed public? 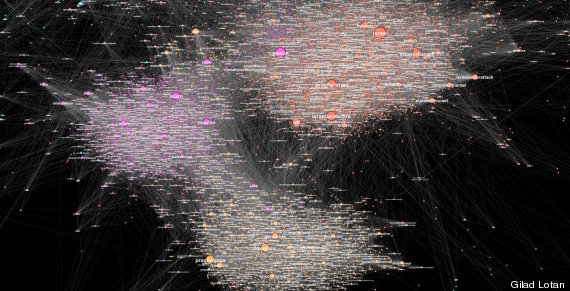 As I'm writing this post, details of an Israeli Air Force missile attack near the entrance of a United Nations school in Rafah are emerging. The attack killed at least 10, injuring many more. The IDF claims it had targeted three members of the Islamic Jihad riding a motorcycle near the school, not the school itself.

Within the hour, top English-language news portals are leading with the story (see image gallery):

When we take a look at some of the top Israeli digital media portals, there's little mention of the incident at all (headlines translated from Hebrew):

As you can see, there's almost no mention of the incident across major Israeli media portals. Ha'aretz does cover the story, but Ha'aretz also has less than 10% readership, as it is considered to engender extreme liberal views. In the fallout of this war, the paper is also losing subscribers angered by published articles critiquing the IDF.

Israelis are convinced that media around the world is one-sided, anti-Israeli, and heavily biased towards the Palestinian cause. Yet few come out against their own clearly biased, heavily concentrated and privately owned media (see: Mozes family , Sheldon Adelson).

The following illustration, created in 2012 in response to CNN's whitewashing of Bahrain dictatorship, has been popularly shared across Israeli Facebook pages over the past weeks. It depicts common Israeli sentiment towards western media, as irrational and detached from reality.

This illustration originally created by Carlos Latuff, a cartoonist, artist and activist based in Rio de Janeiro, Brazil, was heavily shared amongst Israeli users on Facebook over the past month.

These very deliberate choices made by media outlets affect our reality, how well we're informed as a public. Should Israelis show more sympathy towards the U.N. school attack? And if so, who is to blame?

... the landscape is much more nuanced, and highly personalized. We construct a representation of our interest by choosing to follow or like specific pages. The more we engage with certain type of content, the more similar content is made visible in our feeds. Recommendation and scoring functions learn from our social connections and our actions online, constructing a model that optimizes for engagement; the more engagement, the more traffic, clicks, likes, shares, and so forth, the higher the company's supposed value. Our capitalistic markets appreciate a growing value.

Facebook plays a key role at disseminating information to the population at large. While some Israelis share news articles in their feeds, many use content sourced by a number of very popular Facebook pages. These are public pages that typically surface funny memes, or buzzfeed-style attention-grabbing images, highly shareable content perfect for Facebook feed-style interactions.

StandWithUs (413k likes), an international non-profit organization dedicated to "informing the public about Israel and combating extremism and anti-Semitism" had no mention of the U.N. incident. The same goes for Kikar Hashabat (117k likes) and Tweeting Statuses (605k likes), a heavily followed humor and media curation page.

Instead, the following map of the Gaza Strip as a minesweeper grid was posted, with the following comment: "currently spreading on WhatsApp".

The group's moderator clearly received the image from a WhatsApp group, and posted to this public FB page, which received over 11k likes, hundreds of shares and so far, 133 comments, ranging from critiques to justifications; a highly polarized stream of comments.

Once again, the Israeli sources had not even a single mention of the U.N. incident. It wasn't covered by Israeli media, nor was it surfaced through popular Facebook pages.

The graph below represents Twitter accounts responding to a different incident at the UNWRA school in Beit Hanoun between July 25th and 30th. It is still unclear who is to blame for firing at the school, although someone clearly learned their Google SEO tricks (click here to see who comes up first on Google search).

Nodes are Twitter handles, and their connections represents who follow relationships. The larger a node, the higher its centrality, the more followed that account is within this group. The closer together two nodes, the more connections they share. Different colors represent communities, effectively regions that display significant levels of connectivity; nodes of the same color are much more inter-connected compared to the rest of the graph.

This network graph details the landscape of Twitter handles responding to the UNWRA school bombing.

Network graphs are mathematical tools used to model relations between objects, and are incredibly helpful when working with social data. Analyzing their structure helps us gain insight into our culture and society. In this case, we see a clear separation between the two sides. On the right, a clearly "pro-Palestinian" group of activists (in green) as well as a variety of media outlets and journalists (in gray). The gray cluster of bloggers, journalists and international media entities is closely connected with the group of pro-Palestinian activists, which means that information is much more likely to spread amongst the two. This structural characteristic of the graph reinforces general Israeli sentiment regarding international media bias. 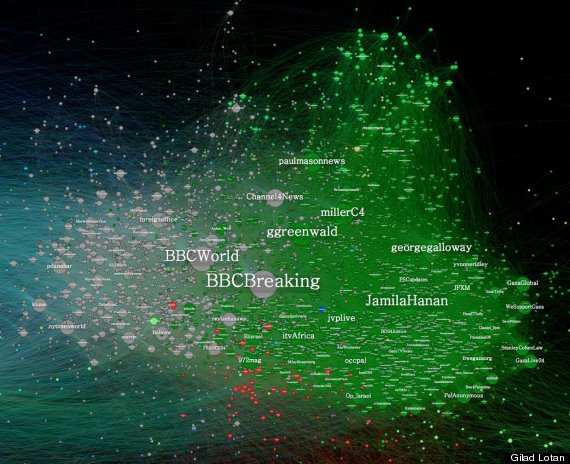 Two of the most popularly forwarded posts from within this side of the graph are:

I've just been to the UNWRA school that was shelled last night 13 dead. 4 shells bracketed school. Targeted or not, area is civilian.

Alternatively, on the other side we encounter the "pro-Israeli" groups, including media outlets, Israeli public personas, and various American zionists (light blue), as well as American conservatives and Tea Party members (dark blue). 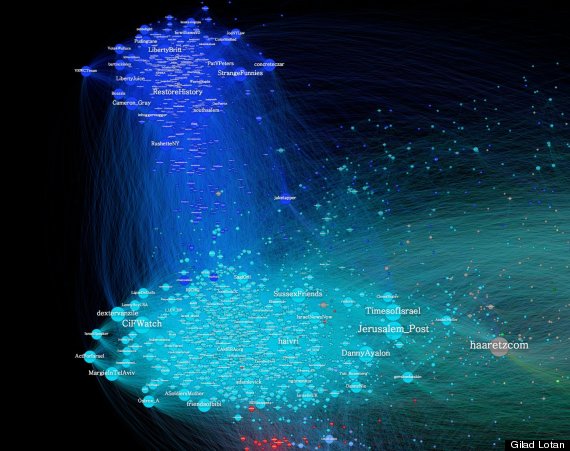 Popularly shared posts within this group include:

How many times can UNWRA claim to be "shocked" by rockets in their schools before people stop buying it? Third time: http://t.co/qwhB9HiBDl

What is UNWRA ? $1 billion annual budget to teach this to the Gaza kids: #hate #war #Nakba Day http://t.co/7FEY9TgMYL pic.twitter.com/OYTdME4FHm

There's a clear difference in frame when we compare one side of the graph to the other. None of the information shared is false per se, yet users make deliberate choices about what they choose to amplify. This is a representation of their values, and the values of their connections. Messages passed along in one side of the graph will never reach the other.

Certain nodes are more strategic when trying to bridge between the two sides. In this case, Haaretz accommodates the most connections on both the pro-Palestinian and pro-Israeli sides of the graph, having the highest betweenness centrality. Compared to all other nodes in the graph, Haaretz is most likely to spread throughout the wider network. It has the most potential for bridging across biases and political barriers.

On Instagram we see similar dynamics play out. The language used to describe pro-Israeli content includes tags such as: #IsraelUnderFire #IStandWithIsrael #PrayForIsrael and #Peace. On the other side of the conflict, we see: #FreeGaza, #PrayForGaza, #Genocide and #BoycottIsrael.

The following tag cloud represents co-occurence of hashtags on Instagram posts. The larger a tag, the more times it appeared. The tighter-connected two tags are, the more times they appeared together.

Call it Homophily, call it the Filter bubble, it is a prevalent phenomenon everywhere we turn.

Personalized online spaces are architected to keep us coming back for more. Content that is likely to generate more clicks, or traffic is prioritized in our feeds, while what makes us uncomfortable, fades into the ether.

When we like a Facebook page we are recommended other similar pages (see: collaborative filtering) based on past actions taken by other users on the site. For example, when I chose to follow Miri Regev (left above image), a conservative Right-wing Israeli politician, the system recommends other Right-wing Israeli politicians, many of which share her political agenda.

Facebook's trending pages aggregate content that are heavily shared ("trending") across the platform. If you're already logged into Facebook, you'll see a personalized view of the trend, highlighting your friends and their views on the trend. Give it a try.

Now open a separate browser window in incognito mode (Chrome: File->New Incognito Window) and navigate to the same page. Since the browser has no idea who you are on Facebook, you'll get the raw, unpersonalized feed.

How are the two different?

If you're rooting for Israel, you might have seen videos of rocket launches by Hamas adjacent to Shifa Hospital. Alternatively, if you're pro-Palestinian, you might have seen the following report on an alleged IDF sniper who admitted (on Instagram) to murdering 13 Gazan children. Israelis and their proponents are likely to see IDF videos such as this one detailing arms and tunnels found within mosques passed around in their social media feeds, while Palestinian groups are likely to pass around images displaying the sheer destruction caused by IDF forces to Gazan mosques. One side sees videos of rockets intercepted in the Tel-Aviv skies, and other sees the lethal aftermath of a missile attack on a Gazan neighborhood.

The better we get at modeling user preferences, the more accurately we construct recommendation engines that fully capture user attention. In a way, we are building personalized propaganda engines that feed users content which makes them feel good and throws away the uncomfortable bits.

In Search of Sanity

I was surprised to find a relatively sane discussion happening in one social network -- Secret.ly, an app that lets you share anonymous messages with your friends. The service published a page with a list of posts about the conflict. I found one of particular interest, not only for the topic, but the actual discussion that unfolded. The combination of anonymity and some proxy for social ties seemed to calm down the typically polarized and extreme tone of conversations.

We need to be more thoughtful about adding and maintaining bridges across information silos online. In the Twitter example above, Ha'aretz is clearly positioned well in the network to make important impact on both sides, yet due to that, Ha'aretz also struggles to find its core audience, hence secure enough budget to operate and grow. If you made it this far down the article, you clearly care about the topic. There are two ways you can help: