A medical examiner has confirmed what killed a teenage artist who did not survive a controversial encounter with Miami Beach police: as first reported by the Miami Herald, it was the shock from an officer's Taser, which produced “sudden cardiac death."

The conclusion -- that a Taser is the primary cause of death -- is rare, and likely to stoke the ongoing debate over the safety of the devices and how they are used.

It also confirmed that 18-year-old Israel Hernandez, a graffiti artist known as "Reefa," was not on drugs that caused his body to overheat, as police had suggested after his death. According to the Herald, the toxicology report showed only marijuana in his system.

Hernandez died one early morning last August, shortly after Miami Beach police spotted him scrawling graffiti on an abandoned, paint-covered McDonald's. A foot chase ensued involving "more than half a dozen" officers, according to Miami New Times, and when Hernandez was cornered, Officer Jorge Mercado shocked him in the chest.

Two of Hernandez's friends who witnessed the incident told WSVN that officers shoved Hernandez against a wall, then high-fived as he lay motionless.

His death prompted Hernadez's family to file a lawsuit against the City of Miami Beach and its police, accusing officers of excessive force for their response to such a minor crime -- a second-degree misdemeanor that would not likely have resulted in prosecution.

"Officers had no reasonable basis to fear for their own safety or the safety of the public," the lawsuit reads. The suit also claims police training and supervision is inadequate to prevent excessive force, and that officers are not properly trained to give medical attention after the use of a Taser.

"We've been saying it for seven months. [The medical examiner's conclusion] is nothing new," Israel Hernandez, Sr. told the Herald. "My son didn't deserve the death penalty."

The company that makes Tasers has warned police agencies against stunning suspects in the chest, citing an "extremely" low risk of "adverse cardiac event," according to a report by the Arizona Republic. But according to Miami New Times, the Miami Beach Police Department only advises against intentionally striking subjects in the "eyes, groin or face."

An Amnesty International report from 2012 says some 500 people in the U.S. have died after being shocked with a Taser, though in nearly all cases the official cause of death cites something other than the weapon.

But disturbingly, three other men have died in recent weeks after being Tasered by Miami-area police. Reports New Times:

On February 5, 21-year-old barber Willie Sams died after Miami-Dade Police used a Taser on him during an altercation. The 21-year-old was in town visiting family from Georgia.

Three weeks later, two more men died on the same day following use of the device.

On February 27, 37-year-old Maykel Antonio Barrera died after MDPD shot him with a Taser. Hours later, backyard boxer Treon Johnson, 27, died after he was shocked by Hialeah Police.

Protestors have demanded the arrest of Mercado, who was previously accused of excessive force, among other troubling revelations from his police personnel file, and the case is under review by the Florida Department of Law Enforcement as well as Miami Beach Police and local prosecutors.

“We’re all parents, and our hearts go out to his family and all of his friends," Miami-Dade State Attorney Katherine Fernandez Rundle told the Herald. “We understand everyone is waiting for our final conclusion, and we will do it as quickly as humanly possible, without compromising, of course.”

UPDATE, 5:30 p.m.: A group of friends and concerned community members called Justice For Reefa have announced plans for a press conference Monday morning to demand the arrest of the officer who Tasered Israel Hernandez.

"The medical examiner's report is saying what we have known for seven months. Israel was killed by Jorge Mercado in violation of state law and Miami Beach policy," said Jorge Estomba, a Justice for Reefa committee member, in a statement. "And Israel's killer has neither spent a day in jail for his crime nor has he lost his job as a police officer. Everyday that goes by in which State Attorney Katherine Fernandez Rundle does not arrest him, is a day in which justice is not served for the people of Miami."

The group plans to appear outside Fernandez Rundle's Miami office at 10:30 Monday morning. 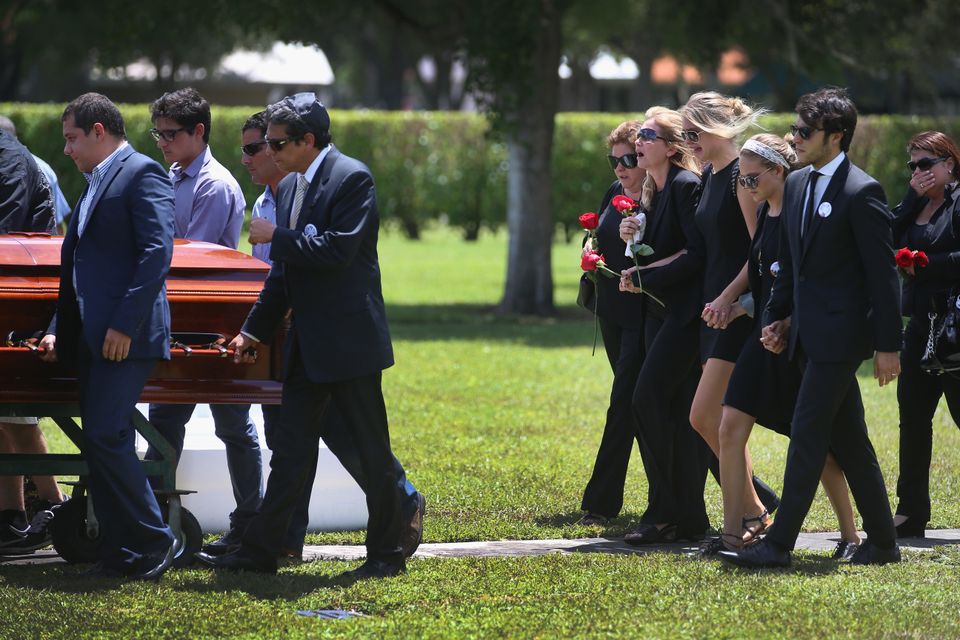 1 / 24
Funeral Held For Miami Teen Killed By Police Taser
MIAMI LAKES, FL - AUGUST 14: Jacqueline Llach (2nd L) the mother of 18-year-old graffiti artist Israel Hernandez-Llach, walks with the girlfriend, Alexandria Morgan (C) and her daughter, Offir Hernandez, and others walk behind the casket as they attend the burial of her son, at the Vista Memorial Gardens & Funeral Home, after he died when he was Tasered by a Miami Beach police officer on August 14, 2013 in Miami Lakes, Florida. Officers reportedly saw Hernandez-Llach painting graffiti on the front of an abandoned McDonald's building on Miami Beach on August 6th, a chase ensued and police apprehended him with the help of a stun gun administered to his chest. He then displayed signs of medical distress and was pronounced dead soon after. (Photo by Joe Raedle/Getty Images)
Getty Images