TEL AVIV - So I am here to study the world's leader in water conservation. Who knew that Israel legitimately has earned this distinction? 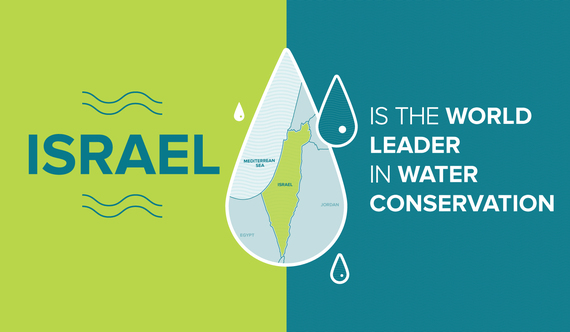 Indeed, Israel is one of the only countries in the world that has created such an efficient infrastructure of water supply and conservation that it can now function without rain. How is this possible? Desalinization plants are a key piece of the puzzle, embellished by rather extreme rationing, low flow everything, and high public awareness of the value of every drop. Not to mention, a sophisticated network of over 250 storage tanks and large reservoirs that provide water during the dry, hot summer months. Many of these infrastructure projects were built with private U.S. funds coming mainly from the Jewish National Fund. 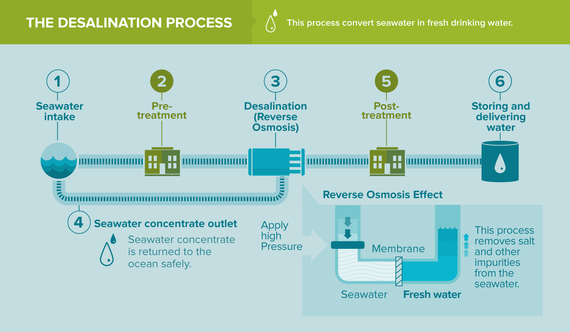 Israel is opening up about its expertise in water management. As I wrote in 2014, in "Squeezing Water from a Rock", representatives from many parched countries have visited to study with Israel's water experts, and departed with vast knowledge that they can take back to their own drought-ridden lands. I think many parts of the world could benefit from Israel's intellectual capital when it comes to water solutions.

Lord knows we could use their help right here in California. A recent cover story of The New York Times' "Science Times" section examined the crisis situation in California, and the war between farmers in the Central Coast and Central Valley, vs. oh, maybe 20 million or so residents of the Los Angeles basin who also need water. Not once is the word desalinization mentioned, despite L.A.'s proximity to the Pacific Ocean. Not sure I get that? Perhaps it is related to the convoluted and oftentimes debilitating process faced in planning, funding and receiving approval to build the largest desalinization plant in the Western Hemisphere, the Claude "Bud" Lewis Desalination Plant based in Carlsbad, CA. Owned and operated by Poseidon, this plant took 15 years, start to finish and is now producing 50 million gallons of water per day. The budget far exceeded even the loftiest expectations, reaching $1 billion when all was said and done. Unlike this example, Israel has been able to develop a national strategy for water management because the state runs the water grid. This is a sharp contrast to our situation at home, where deals must be planned and battled out in the courtroom, county by county, state by state. Meanwhile, waiting 15 years to pursue future desalination plants or other drought management solutions may not be an option. 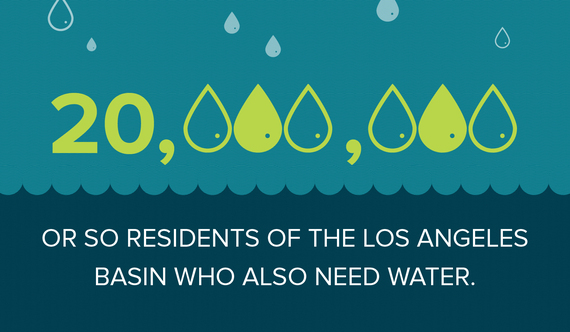 "The US government projects that 40 of our 50 states will be facing water problems within the next 10 years. Although California gets nearly all of the news coverage, many other states are already feeling water supply problems. California has entered into an arrangement with Israel to accelerate Israeli engagement in California's water sector. I'm sure that other states will follow. Israel has so much to teach the world about how to prepare for a drier, more water-limited future," said Jeff Levine, a New York City property developer and President of the Jewish National Fund. JNF has been an integral partner in increasing Israel's water economy by over 12% through the treatment, recycling, and collection of waste and runoff waters, responsible aquifer drilling, and river rehabilitation. 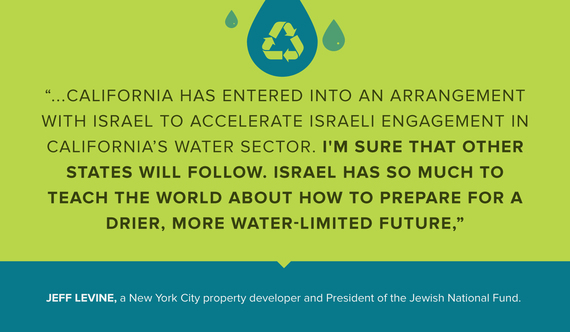 "One major innovation that has helped Israel mitigate its water crisis is drip irrigation, an agricultural irrigation method pioneered in Israel and widely used in agriculture throughout the world. In addition to drip irrigation, Israel has led the way in wastewater management and utilization that is largely credited with saving the country's agricultural industry. With improved treatment techniques and incentives available to farmers to switch to reclaimed sewage water, Israel has become the world's leader in water reuse -- recycling approximately 80% of its water. To put that into context, Spain comes in at a distant second, reusing 17% of its wastewater, and the U.S. at 5%," Levine explained. 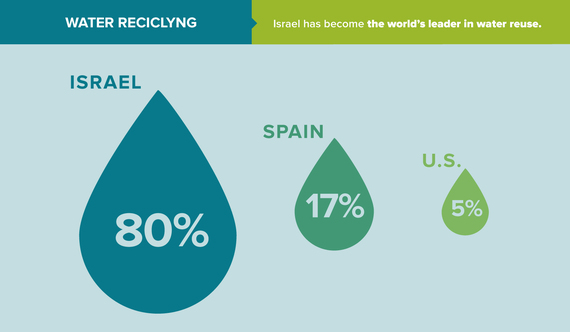 The moral of the story is that Israel was a country faced with extreme water scarcity but turned this into an opportunity using science, technical expertise, and most importantly, long term planning as in a view 50 years ahead. Meanwhile, we go in circles in California about whether the almond farmers will continue to get their huge water allocations while millions of people in L.A. will at some point be out of water. Perhaps, we should spend less time pointing fingers at each other and more time adopting water solutions that are available now?

For more posts on water technology and conservation, please visit www.SCGH.com -- including: Water, Water Everywhere, Nor Any Drop to Drink and Squeezing Water From a Rock and Red, White, and Waterless.