Happy birthday to the Israel Museum! The country's national museum turns 50 this year -- middle age for most of us, but quite young in museum years. 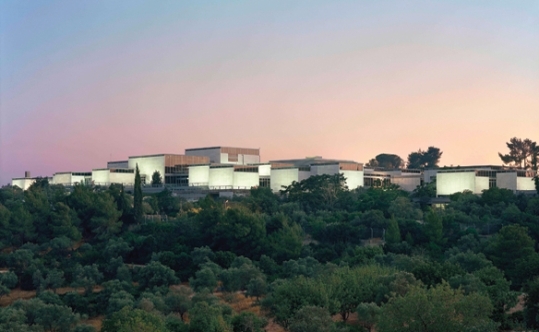 The museum is celebrating the occasion with a year of special exhibits, loans and gifts, adding to its encyclopedic collection covering Middle East archaeology, Jewish life, and modern and contemporary art.

The Israel Museum sits on a 20-acre campus in Jerusalem not far from The Hebrew University of Jerusalem's Givat Ram Campus, the Knesset and the Israel Supreme Court. Originally spearheaded by Jerusalem Mayor Teddy Kollek, the museum represents the consolidation of several earlier public and private collections, such as the Bezalel National Museum and important archaeological finds. It houses more than 500,000 objects, including the world-renowned Dead Sea Scrolls and a small-scale replica of Jerusalem during the time of the Second Temple, which have become a magnet for visitors.

When it opened in 1965, the museum was a campus of international-style pavilions designed by Alfred Mansfeld and Dora Gad, complemented by the outdoor Billy Rose Art Garden, designed by Isamu Noguchi. A separate edifice, the Shrine of the Book (which resembles something of an acorn or a Hershey's Kiss), was designed by Armand Bartos and Frederick Kiesler to house the Dead Sea Scrolls -- ancient religious texts purchased by Hungarian émigré David Samuel Gottesman and donated to the State of Israel.

In 1997, James Snyder, formerly of New York City's Museum of Modern Art, was appointed director, and 13 years later, the museum completed a $100 million campaign to refurbish the campus. The buildings dedicated to archaeology, fine arts, and Jewish art and life were rebuilt and connected by a new entrance pavilion by James Carpenter and are now the spine of the museum.
Whereas a visit to the museum seemed previously a somewhat haphazard affair, with one's interests being dragged in multiple directions, today it is a real pleasure -- well-organized, -appointed and -curated. Never has the museum looked so good.

The new entrance pavilion, a series of broad, rising platforms, is currently home to an installation by Zadok Ben-David called "Evolution and Theory." It runs the length of the pavilion on a bed of sand and consists of 250 hand-cut, razor-thin, life-size aluminum sculptures of the evolutionary stages of man and items inspired by scientific drawings in 19th-century encyclopedias, such as beakers, conical spheres and scales.

This leads to the central gallery and one of the museum's signature anniversary exhibits, "A Brief History of Humankind," which runs through Jan. 2, 2016, and is based in part on the best-selling book by renowned historian Yuval Harari. The museum has gathered 14 objects from its collection that highlight major advances in human civilization and surrounded them with contemporary artworks from around the world.

Just 14 objects, you say? But OMG, what objects!

Among them is the earliest evidence of man-made tools found in the land of Israel -- stones that were used in the Jordan Valley some 1.5 million years ago to create fire or used as a tool for digging and cutting. Not impressed? How about the oldest hearth in Eurasia -- from the north of Israel -- a campfire of burned flint with traces that animals were cooked there some 780,000 years ago -- the first evidence of cooking in Eurasia! There is also the oldest complete sickle in the world, the instrument that changed agriculture, which was found in a cave in northern Israel and dated at some 9,000 years old.

There are 60,000-year-old Neanderthal skulls and the skull of a Homo sapien some 85,000 years old. There are early examples of writing in which marks were made on clay tablets -- cuneiform -- and a fragment from the oldest extant copy of the Ten Commandments, dated to 30 B.C.E. and found among the Dead Sea Scrolls. There's more: a leaf from an original copy of the Gutenberg Bible -- on loan from the National Library of Israel -- and a handwritten page from Albert Einstein's manuscript on the special theory of relativity.

These objects tell the story of the progress of humankind -- the agrarian revolution, the cognitive revolution that brought about writing and communication, and the industrial revolution whose scientific discoveries ushered in the modern age.

The artworks that surround these objects range from Los Angeles artist Charles Ray's unsettling set of nude mannequins, "Family Romance" (1993), to film clips from Charlie Chaplin's "Modern Times" (1936). The cumulative effect of the show is to feel the breadth of mankind's progress and development. It is an exhibition that implicitly demonstrates the authority and the contemporary currency of the Israel Museum, as well as its value as a repository whose collection spans the sweep of civilization.

This golden anniversary is also occasion to revisit the Shrine of the Book, home to some of the greatest treasures of Jewish knowledge, tradition and culture. It is here you will find the Aleppo Codex, the very Torah that Maimonides, the Rambam himself, used in the 12th century. It is a profound experience to see a scroll that has such history and that connects all Jewish people throughout the centuries.. Likewise, how fascinating to be reminded of the various alternative gospels and texts that the Essenes produced, such as the battle of the Sons of Light against the Sons of Darkness, a phantasmagorical tale that speaks to a mystical, hallucinatory Jewish tradition that is far removed from today's normative practice and observance.

An adjacent exhibition hall contains the Nano Bible, the smallest Bible in the world, etched onto a gold-coated silicon chip the size of a grain of sugar (which can be magnified to confirm its accuracy). Created at the Technion-Israel Institute of Technology, the work's 1.2 million letters were written using a focused ion beam. The exhibition runs through Dec. 31, 2016, and is a modern marvel that complements the ancient writings nearby. 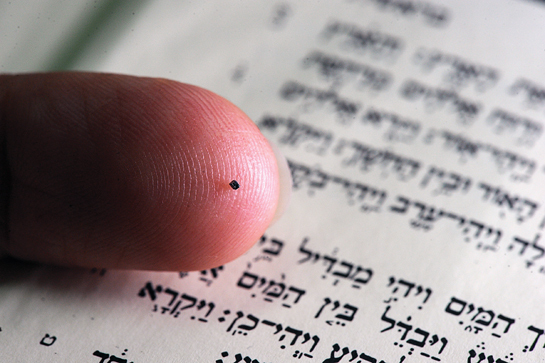 The Nano Bible is the size of a grain of sugar. Photo by Nitzan Zohar/Technion

The Israel Museum is also being celebrated with a number of anniversary gifts and loans, including a gorgeous Jeff Koons piece, "Sacred Heart." The immaculate stainless steel sculpture looks like a giant chocolate heart wrapped in shiny red foil and tied with a gold ribbon. (It's on loan from the collection of Steven and Alexandra Cohen of Greenwich, Conn.)

At 50, the Israel Museum is not showing its age, but rather its place as a world-class art and archaeology museum, whose anniversary deserves celebration -- or at least a visit.