BEIRUT -- How does Israel read the Middle East these days? Few details on its national security strategy are explicitly and publicly expressed. But at the annual Herzliya Security Conference in mid-June, it was possible to read between the lines of officials' speeches and form a fairly accurate picture of the way those officials interpret the Middle East.

The gist of the Israeli Defense Forces' analysis came from Major General Herzl Halevi, the chief of the IDF's military intelligence directorate. As with most political speeches, the substance lies with just a few enigmatic words.

"I'm going to say this with all due caution, but there has never been an army that knows as much about its enemy as we know about Hezbollah," the intelligence chief said. "But still, the next war will not be simple, it will not be easy."

For Israel, Hezbollah must be incapacitated or destroyed; war becomes inexorable by implication.

As the Times of Israel laconically commented, Halevi "wouldn't say the next round of violence with the Iran-backed terror group would result in mass casualties among Israel's civilian population, but came close."

It is pretty clear from the context that "the next war" is under careful Israeli consideration. But why? Shouldn't the 100,000 or so modern missiles and the battle experience Hezbollah's fighters have acquired in Syria be a deterrent to an Israeli attack?

Well, let us follow Halevi's analysis. He doesn't believe there will be a political settlement to reunify and bring peace to Syria -- he warned that there is only a "slim" chance of that happening in a country "saturated by bloodshed." 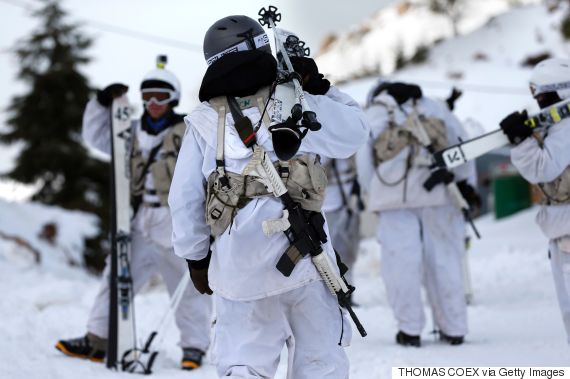 Israeli soldiers from an alpine unit patrol on skis at the Israeli Mount Hermon resort, in the Golan Heights, on Jan. 21. (THOMAS COEX/AFP/Getty Images)

Worse, from Israel's perspective, as the Jewish Chronicle explains: "[Hezbollah] has been bringing Iranian military commanders ever closer to the Israeli border, and it is a commonly held IDF view that Israel will eventually see entire Iranian Revolutionary Guards battalions from their Golan observation points."

Here lies the second, somewhat cloaked, working premise at top levels of IDF intelligence: Iran has gained (in the Israeli perspective, undeserved) international legitimacy from the nuclear agreement, while not mitigating one jot of Iran's hostility towards Israel. In sum, for the IDF, events in Syria will not lead to the political outcome the U.S. and Russia are hoping for; instead, it expects to see the Shiite crescent stretching from Iran to the Mediterranean become more awash in weapons.

But then two even more fundamental premises of the IDF's thinking appeared almost unobtrusively in Halevi's comments. As Defense News reports (emphasis mine):

[Halevi] did not offer Israel's preferred outcome to the war raging beyond its northern border [Syria]. However, he presented a scenario that Israel would find unacceptable.

'The question is not how we would like this story to end, but how would we not like it to end,' he said. 'Let's say Da'esh [an Arabic acronym for the so-called Islamic State] has been contained. The superpowers have left the area, and we are stuck here with the Iranian axis with caches of advanced weaponry.'

To avoid such an outcome, [Halevi] said Israel would have to act 'through coordination with the superpowers and through other means as well.'"

So a key part of Halevi's talk is that Israel perceives that the West is drawing down from the region. This is pretty much conventional wisdom now. But it's even more interesting that, as the Jewish Chronicle reports, "Israel appears to be on the point of signing a breakthrough deal with a collection of Sunni Arab states." If there is an intersection of interests between Israel and Sunni Arab states, it will pivot around their shared hostility towards Iran, Hezbollah and the Shiite crescent, including the Popular Mobilization Forces in Iraq and the Houthis in Yemen.

There are two further things to note. Halevi plays down the jihadist threat, saying, as the Jewish Chronicle reports, only that "Israel would have to 'grapple with' the jihadi threat in the medium term" (emphasis mine again). Relegating the threat to more of a domestic issue than a strategic danger, Halevi expressed little concern for the strategic consequences of a string of jihadi successes rippling across the Middle East.

The strategic threat, then, is not ISIS or al Qaeda. It's pretty clear that, as Halevi confirmed, Hezbollah is now Israel's key strategic challenge. For Israel, Hezbollah must be incapacitated or destroyed; war becomes inexorable by implication. 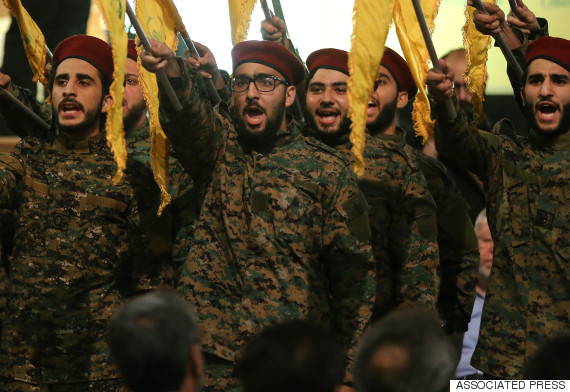 Hezbollah fighters swear allegiance during a ceremony marking the death of their commander, Mustafa Badreddine, on May 20. (AP Photo/Hussein Malla)

The question is whether Israel has concluded that now -- with America engrossed in its presidential election -- is the moment to launch the war. Was this the reason for Avigdor Lieberman's recent appointment as defense minister? Is he the hawk to lead the job? Hezbollah's recall of its elite forces from Syria and its secretary general's warning that the movement faces a difficult and dangerous summer seems to suggest that Hassan Nasrallah, the Hezbollah chief, has concluded that the risk of an imminent strike is real.

According to sources who spoke with the regional correspondent Elijah Magnier, "Nasrallah was serious when he said that the region is heading towards a conflict and that there would be casualties in the next few months. This is because he has information that tells him Israel is preparing for war and soon. And because of this, Hezbollah is prepared for an armed standoff."

It's worth noting that Halevi said Isreal's "strategic challenge" is to "make a change" but to do so "through coordination with the superpowers." He used the plural but surely he meant the U.S. Except -- would the U.S. be amenable to such an action?

I wrote earlier about a May 16 report from the Center for a New American Security, which was drawn up by a bipartisan task force of senior members of the U.S. foreign policy establishment and augmented by dinner discussions with invited experts. It is, in a sense, the riposte from the two interventionist wings of American politics to Trump's iconoclasm in foreign policy. As Jim Lobe wrote, "It's fair to predict that the ... report is likely to be the best guide to date of where a Hillary Clinton presidency will want to take the country's foreign policy."

The question is if Israel has concluded that now -- with America engrossed in its presidential election -- is the moment to launch the war.

The report discusses how to maintain America's benevolent hegemony -- or how to maintain and expand today's "rules-based international order," which implies maintaining and expanding the geo-financial order as much as the political one. "[F]rom a resurgent Russia to a rising China that is challenging the rules-based international order to chaos, and the struggle for power in the Middle East," the report reads, "the United States needs a force that can flex across several different mission sets and prevail." The report restates in more nuanced language many of ideas that underline the concept of the "American Century" and U.S.-led unipolar world order.

The report's authors argue that the U.S. needs to "undermine and defeat Iran's hegemonic ambitions in the Greater Middle East ... Whether in Lebanon, Yemen, Syria or Bahrain, Tehran's advances and longer-term ambitions should be regarded as a threat to stability that it is in the U.S. interest to counter and deter."

As I've previously noted, the report plays down Saudi Arabia's role in regional conflicts: "We also reject Iran's attempt to blame others for regional tensions it is aggravating, as well as its public campaign to demonize the government of Saudi Arabia." That's a real eyebrow-raiser. So Saudi Arabia spreading violent fundamentalist Islam has nothing to do with regional conflict? It seems that Halevi's remark about coordination with a superpower was no mere whimsical flourish. It was based on the perception of closely aligned interests between Israel and the U.S. Democratic Party establishment, which has begun to pivot toward a possible Clinton presidency. 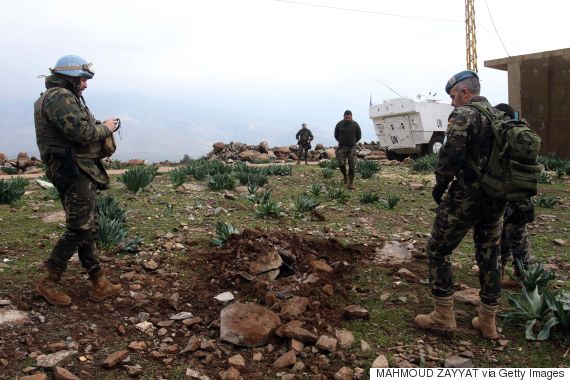 U.N. soldiers stand at the site of a shell in the Lebanese village of Wazzani on border with Israel on Jan. 5, one day after the Israeli army shelled the area in retaliation to an attack by Hezbollah that targeted an Israeli army. (AFP/Getty/MAHMOUD ZAYYAT)

One of Clinton's apparent top choices for defense secretary is Michele Flournoy, a member of the CNAS task force that wrote the report. At a CNAS conference last week, according to Defense One, Flournoy said that since Russia increased its involvement in Syria, the facts on the ground "do not support the kind of negotiated conditions we would like to get to." As she told Defense One in an interview and a follow-up letter, U.S. policy should include "using limited military coercion" -- primarily strikes using "standoff weapons" -- "to retaliate against Syrian military targets in order to stop violations of the Cessation of Hostilities, deter Russian and Syrian bombing of innocent civilians and the opposition groups we support." (Emphasis mine.)

What does all this have to do with Halevi's speech? It resonates remarkably closely (perhaps not unsurprisingly) with the way senior Israeli officials seem to look at the Middle East today. And perhaps Halevi's speech at Herzliya is an indication that the IDF considers Hilary's path to the White House a slam-dunk?

Shouldn't the modern missiles and battle experience Hezbollah's fighters have acquired in Syria be a deterrent to an Israeli attack?

Sunni jihadist forces have long been a Western tool to undermine Iran. The Gulf Sunni states also want to make sure al Qaeda and ISIS jihadists neither completely succeed nor completely fail, so it would be logical for Israel to see the jihadists who dominate the fighting in Syria as useful in a fight against the Iran-Hezbollah alliance.

As Halevi said at the Herzliya conference, "Some of the interests of the pragmatic Sunni countries are getting closer to our interests. This is an interesting development, and there is an opportunity in it." Israel can perceive that Saudi Arabia sees the jihadist groups in Syria like ISIS and the Nusra Front as useful tools in countering Iranian influence in Syria, even as it excoriates them as terrorist groups. And Israel, Halevy seemed to be hinting, sees a commonality of interest with supposedly pragmatic Saudi Arabia in this respect. Israel does not want Iranian troops at its border.