More than half of the 163 Palestinians killed last week during Israel's Operation Pillar of Cloud in Gaza were civilians, including 37 children. In Israel, six were killed in the latest eight-day escalation; fortunately, no children were among them.

But the real human cost in these cycles of killing is rarely remembered and seldom put into its broader context. This is due in part to the longstanding bias in much of the mainstream media's coverage. But also because our leaders here in America would rather we simply forget the massive military power imbalance, their fundamental role in funding it, and the destruction that ensues.

This timeline shows the lives lost in the Israeli-Palestinian conflict -- drawing on detailed data gathered by Israeli human rights organization B'Tselem -- since the outbreak of the Second Intifada in September 2000.

While it only represents a fragment of a conflict that stretches back to the turn of the 20th Century, in the 12-year period since 2000, an underlying asymmetry is revealed, allowing us to look past the headlines and hype, and focus instead on the hard data. 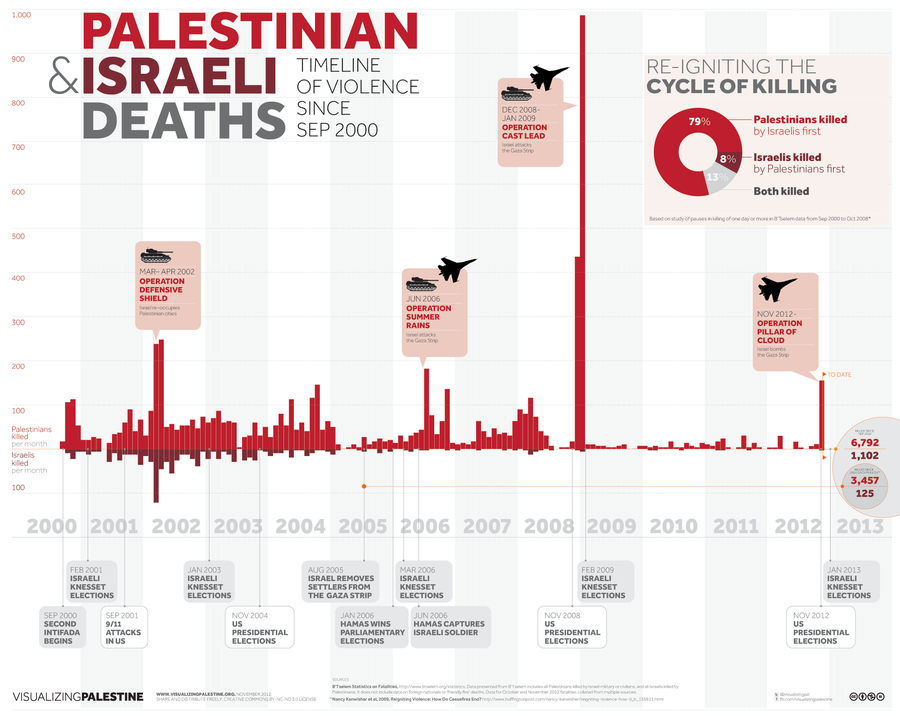 Visualizing Palestine creates visual stories for social justice. It is an independent, non-partisan initiative that aims to empower community and civil society efforts, capitalising on digital innovation to bring facts to the public in a single frame.

Visualizing Palestine produces its visuals by taking data from globally respected international, Palestinian and Israeli human rights organizations, bringing together an interdisciplinary network of individuals and partner organizations working in research, design, technology, communication and new media and reshaping the information into a visual story. VP breaks down statistics and information around key issues like house demolitions, hunger strikes, and water contamination to make them more accessible to the general public.

Visualizing Palestine disseminates infographics through its online platform and social media under a Creative Commons license. By doing so, it seeks to harness the power of social media and, through collective action, to assist communities around the world in spreading an informed, facts-based narrative that enables a more critically aware conversation on Palestine and Israel.