Adi Nes is a gay Israeli artist concerned with representations of masculinity and power. In 2003, Richard Goldstein at the Village voice wrote, "No young artist has so vividly captured the hidden cost of victory, the fine line between power and fragility, the interplay of arrogance and despair that shapes wartime identity." With this in mind, we asked Nes about his art, his country, and his philosophy on life. Scroll down for images from his latest work, "The Village," which debuts simultaneously in Paris, New York, and Tel Aviv this month. 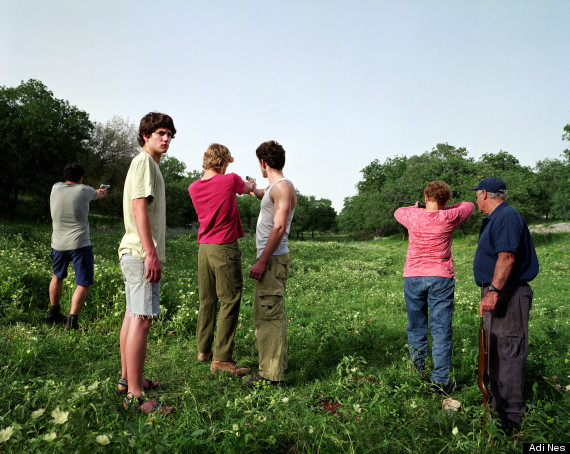 HP: How did you conceive of this series?

AN: Usually, when I begin working on a new series of photographs, I think of some theme which inspires me, along with central characters. That’s how it was with the most recent series -– the central characters were street people whom I directed, inspired by heroes from the Bible. When I finished the previous project, I wanted a change of atmosphere and I wanted to free myself from all those city images, sparse locations and engagement with life in the sewers. So I decided to seek the open country. That’s how I arrived at the idea to situate this series of photographs in a village surrounded by green fields, wide vistas, trees full of fruit and springs of water. The village I built was dreamlike, yet I didn’t want to avoid expressing other feelings which frequently arise in dreams and in our souls: fears, terror, and difficulties dealing with existence.

One of the central themes of my art is masculinity. Consequently, I chose that some of the characters would be “salt of the earth” -- men who look you straight in the eyes with their blue eyes, even though their lives are strewn with tragedy. In my work I often refer to images from the history of art and culture. Here I decided to base the village on elements of Greek tragedy. The painting which inspired the entire project –- even though I didn’t create any specific photograph from it – was Breugel’s "Landscape with the Fall of Icarus."

In a Sisyphean sort of way, the farmer in the Breugel’s painting continues to plow even though dramatic events are taking place around him and Icarus falls into the sea. Like Icarus and other tragic Greek heroes, the characters in my photographs also suffer from the sin of pride; hubris is the element which undermines them.

HP: Nietzsche once wrote, "We have art so that we do not die of reality." (Incidentally, J.M. Coetzee quoted this when he received the Jerusalem prize.) How does this idea play into your work?

AN: Unfortunately, in the places I live and work, people die from reality. Artists, and art never succeeded at stopping politicians or generals, or at opening their eyes. Yet if we hold on to Breugel’s image for a moment -– the strength of the farmer to continue plowing, or enlarge this to include our strength to continue existing – we can only do this because we know that alongside the Sisyphean struggle of our daily lives we have a dream or beliefs, art or culture -– call it what you will.

Yet as long as you’re quoting Nietzsche, let’s look at something else he said which fits my current work more aptly. In "The Birth of Tragedy," Nietzsche wrote about two opposing forces in people: the Apollonian and Dionysian forces. Apollo, the sun god, represents restraint, calmness and clear reason. Dionysus, on the other hand, represents ecstasy and human creativity. I sense that everything is composed of opposites. Art is the inspiration for life and death; or the fear of death is frequently the inspiration for art. 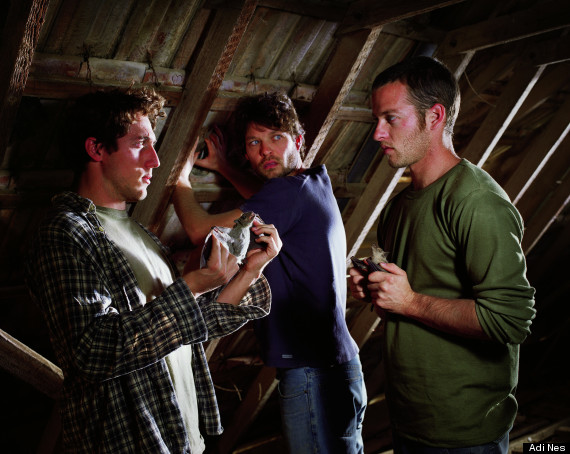 HP: Your hometown, Kiryat Gat, lies in between the West Bank and the Gaza Strip. What was your feeling growing up between these two Palestinian communities?

AN: Kiryat Gat received its name from the adjacent archeological site of Gat where it was thought the biblical Philistines lived. When I was growing up, my friends and I called that site “Mt. Goliath”. We used to ride our bikes through the city dump to get to that spot and thought it was where David and Goliath fought each other. As time passed, it became clear that this was a case of mistaken identity; the ancient city of Gat is actually located elsewhere, and the nearby archeological site, though an ancient city in its own right, does not date back to biblical times.

I was born about a year before the Six Day War and the occupation of the territories, and grew up during a time when many Israelis believed that the occupation would bring some sort of redemption to Israelis (by virtue of regaining control of the biblical land of our ancestors) and peace to the surrounding Palestinian villages. Even now, after many years, it’s clear that the dream is one thing, and reality another, and that the occupation bore fruits of despair for both sides.

In the last few years Kiryat Gat, the city of my childhood, where my mother lives to this day, is under attack by missiles fired from Gaza at the citizens of the city. In the nearby West Bank, the situation is also tense. To my sorrow, both sides –- the Israelis and the Palestinians –- haven’t awakened from their dreams. They want to throw us into the sea, and many Israelis think that it’s somehow possible to hold on to occupied lands. By looking at the archeological site near the city of my childhood one can uncover the shattered dreams of many cultures which existed there since just after biblical times, through the Crusades, up until now. I think it’s worthwhile for both sides to wake up from useless dreams. David and Goliath belong to a different time. Rather than ascribe one side or the other as being like David, the underdog and victim, who struck the aggressive giant, it would be much more productive to work together to make the blood-soaked land bloom again.

HP: Sephardim are depicted as outsiders in your works (e.g., the boy in the first picture of "The Village"). Why is this the case? What is the relationship between Askenazi and Sephardic Jews at this point in time? What are the fissures between them and how do these play out in your artwork?

AN: The view of the photographer is usually the view of the outsider –- the person who looks at things from the side. This is the way I look at things also by virtue of my biography: as a homosexual, who grew up in the periphery, from a middle-class Sephardic family. The central theme of my work is that of identity. While Sephardic Jews are not a minority in Israel, for many years they were thought of as such. Minority groups usually deal with their identities. By the way, adolescent boys and soldiers are at the age when a lot of questions of identity are asked which is why I chose them as subjects in previous series.

In the Zionist ethos, the Ashkenazic, European or native-born image was established which was a symbol one strove to be like. This person had to represent the complete opposite of the weak Jew who came from the diaspora after the Holocaust. The new Jew sought to rid himself of the past and to build a new society. Frequently, erasing the past for the sake of unifying society (an idea based, to a certain extent, on socialism) caused the Jewish identity of many new immigrants from all corners of the world to be devalued.

The dark-skinned boy photographed with the horse doesn’t, in my eyes, only represent Sephardic Jews, but rather, he represents all those viewed as an “other”. He could be the Arab in Jewish society, or Sephardic Jewish immigrants as opposed to native-born Israelis.

This boy represents the fantasy of the person who isn’t part of any group yet who yearns to belong. He represents the Sephardic fantasy in the eyes of the group, their desire to connect to the Mediterranean culture, to ride horses bare-back, to tan their complexions since “Black is Beautiful." To a certain extent, everyone wants some aspect of the other.

In the "Boys" series of photographs I did in 2000, I chose to cast dark-skinned boys for two reasons. I wanted them to have a Mediterranean skin color since the project was based on Greek mythology, and I also wanted to raise issues of ethnic origins. From the outset the project was created as a museum piece; I wanted the museum walls to display portraits of people who otherwise would never be granted the privilege of appearing there.

But you must keep in mind, that my photographs are always metaphors. On the surface they appear as if they deal with local matters connected to conflicts or social tensions from the place in which I come. Yet, actually, as with all art, they can be read a number of ways: philosophically, psychologically, influenced by many cultural sources… Take, for example, my photograph of the boy with the horse. It’s based on Picasso’s "Boy Leading a Horse" (1906). And if one looks at this in the context of the blind seer of this series, one can easily see the connection between this and the 1973 play by Peter Shaffer, "Equus," (horse in Latin) in which a disturbed young stable hand blinds horses.

One could look at "The Village" as a real village in which the photographer lives (despite the fact that all the photographs are staged and the locations are sets I arranged) but aging farmers look somewhat alike all over the world. The village is an image. It’s an arena in which I grant my characters life. Unlike movies, the entire project gives viewers the foundations upon which a script could be written, but does not provide the script itself. Each person, with each viewing, builds his or her own script –- his or her own story.

PHOTO GALLERY
&#039;The Villagers&#039;
Download
Calling all HuffPost superfans!
Sign up for membership to become a founding member and help shape HuffPost's next chapter
Join HuffPost 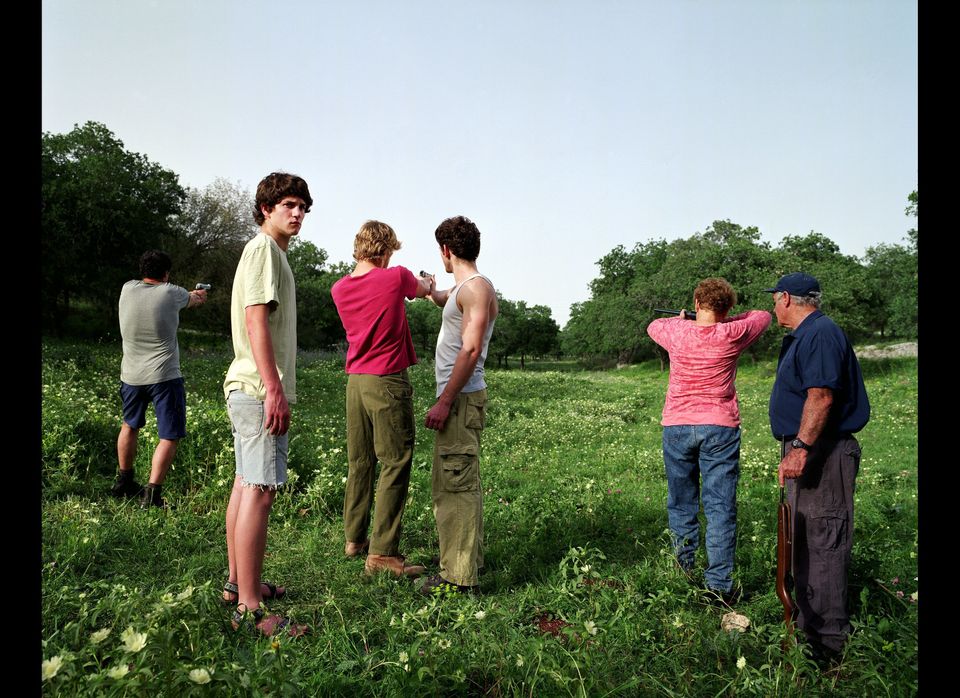