JERUSALEM (RNS) An Israeli family experienced the surprise of a lifetime when, during a home renovation, workers discovered a 2,000-year-old Jewish ritual bath, called a mikvah.

The discovery lends weight to what some archaeologists have long suspected: that a Jewish community existed in Jerusalem’s Ein Kerem neighborhood during the time when Jesus lived.

Christians believe John the Baptist was born in Ein Kerem, a popular pilgrimage site and home to
several monasteries and churches.

On Wednesday (July 1), the Israel Antiquities Authority briefly showed the ritual bath to journalists and awarded the owners, Oriah Shimshoni and her husband, Tal, a certificate of appreciation for reporting the discovery, which “contributed to the study of the Land of Israel,” the IAA said.

Reporting an archaeological find on one’s property — something that happens quite frequently in Israel — can be a disruptive process when the state’s archaeologists feel it necessary to excavate the site.

The 11.5-foot-by-8-foot bath was discovered complete. 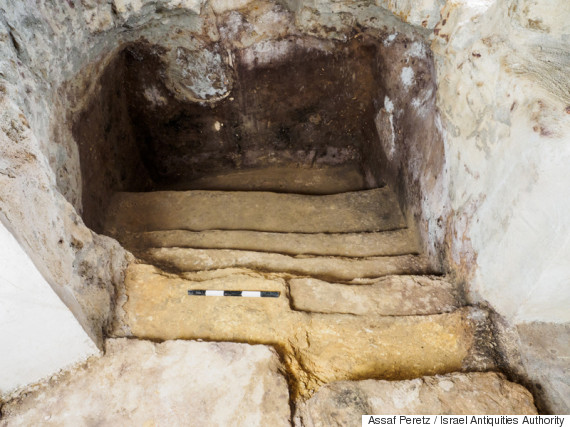 “It is rock-hewn and meticulously plastered according to the Jewish laws of purity,” the IAA said. A stone staircase leads to the bottom of the immersion pool.

Pottery vessels dating to the first century and traces of fire that might constitute evidence of the destruction of the Jerusalem Temple around years 66-70 were discovered inside the bath.

In addition, fragments of stone vessels were found that were common during the period.

A mikvah is a pool of water — some of it from a natural source — in which observant married Jewish women are required to dip once a month, seven days after the end of their menstrual cycle.

Amit Re’em, an archaeologist, said the discovery was important because until now, the archaeological remains in Ein Kerem were “few and fragmented.”

The discovery of the ritual bath reinforces the hypothesis that there was a Jewish settlement Ein Kerem. The area is also important to Christians, he said, because it is where John the Baptist was born and where his pregnant mother, Elizabeth, met with Mary, mother of Jesus.